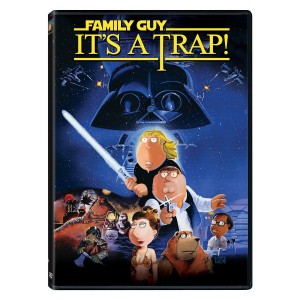 Family Guy is back to fulfill it’s destiny with the third and final installment of their tribute to the original Star Wars Trilogy. The whole gang is back of course with Peter Solo, Chris Skywalker, Princess Lois, Stewie Vader, and we get to meet some surprising new faces. For example the episode will feature Roger and Klaus from American Dad as they play an Imperial officer and Admiral Ackbar respectively. The bears from The Cleveland Show will be the Ewoks, and I love the fact that Meg portrays the Sarlacc. If you are a fan of the first two films you will not be disappointed with the third. I love the  jokes that they do to poke fun at Return of the Jedi. Mike from our podcast team recently had a chance to interview Mark Hentemann, who is a writer for Family Guy and worked on It’s A Trap.

It’s A Trap is coming out on both Blu-ray and DVD on December 21st as well the whole trilogy box set on that same date as well. This trilogy makes a perfect holiday gift for the Family Guy or Star Wars fan on your list. The bonus features include the following: Deleted Scenes, Trivial Pursuit, Dinner and a Movie, Peter Shin Draws, Making the Scene, Animatic, Family Guy at Comic-con 2010, and the Original Voice Over Skit. You can purchase the film at Amazon.com. Plus follow us on Twitter for  your chance to win It’s a Trap! Check out the trailer, and full podcast interview out below :