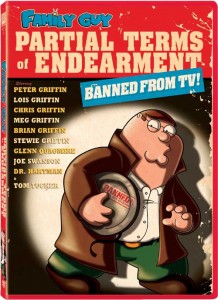 On September 28th you can get the Family Guy: Partial Terms of Endearment and season one of The Cleveland Show on DVD. The Family Guy DVD is the full-length episode banned from television. You know if this show was banned on TV it has to be awesome. It was one of the most talked about episodes from the Family Guy series.

In the episode, Lois agrees to become a surrogate mother for an infertile couple against Peter’s wishes. The description alone should have you thinking  how many jokes Peter or Stewie will be dropping throughout the show. The DVD not only contains the uncensored episode, but many great features as well. It has the Seth and Alex Almost Live Comedy Show, the Family Guy Live and Uncensored Table Read, a digital copy and nine original songs composed for Family Guy. This is a must have for any Family Guy fan! Partial Terms of Endearment sells for $14.98 and you can purchase the DVD at Fox’s website or on Amazon.com. 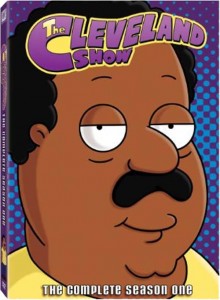 The hilarious spin-off show from Family Guy is The Cleveland Show. Season one starts off with Cleveland going back to his hometown in Virginia. Once there, he tries to start a new life with his old high school sweetheart. When they are not fighting with each other and the family, they have to contend with redneck neighbors.

The four disc set has all of 21 episodes from season one, plus some great uncensored and unaired episodes, and audio commentary from Seth MacFarlane, Richard Appel, Mike Henry, and others. The DVD has deleted scenes, the Christmas music video “Get Your Hump On” done by Earth, Wind, and Fire, and a Meet Cleveland featurette.  In addition, there are digital extras with the Clips To Go feature.  The DVD is priced at $39.98 and you can pick it up at Fox’s website or Amazon.com.