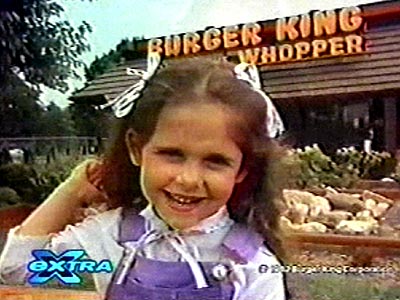 Everyone knows that Fast Food Burger joints used to get pimped by such Entertainment Mega-Stars as Michael Jordan, Emmanuel Lewis, and Darius Rucker, but those guys were already famous long before the ad bug bit. On the other side of the coin is those future acting talents who were as yet unknown to the world. Many names you’d immediately recognize (and maybe a few you really wouldn’t) began their respective and illustrious careers shilling for the King and the Clown. Yes, back when fast food not only looked a ton better, but also had much catchier jingles and far less patronizing and dour ad campaigns. These commercials actually make me want to eat the stunning products being hocked, not just sigh when my Whopper looks like it was scraped off the bathroom floor. Anyway, enjoy ten celebrities selling their dignity for corporate ducats. Also probably free food.

Though the video looks like it was shot on a Super-8, rest assured this songstress from the Democratic Republic of Congo is one of the kids dancing on about the kids choices. Look it up, lazy. I dare ya!

Watch right around the sixteen-second mark and you’ll see a chipper fellow high-steppin’ his way into the kitchen swinging a broom. Yep, that’s the guy who’d eventually go on to play the adult Kunta Kinte. Wow, how times have changed.

Okay, this one’s kind of a gimme since good old Willard was actually the first guy to portray Ronald McDonald on TV. Even so, I think this creepy get-up would give Pennywise a run for his money. We all float down here.

I’ve got to hand it to him, at the very least he didn’t start humping that hamburger. Yeah, I so went there.

Svelte. Awesome hair. Dancing like a lunatic. Oh yes, it’s George Costanza himself gettin’ all funky with the McDLT! I’m sorry if I offend, but I loved that burger! Yeah, it was a hassle, yeah it had enough Styrofoam to dam a river, but it sure kept those hots and colds on their own sides of the package, mister!

Yeah, it’s another with the stunning Elizabeth Shue, but with a bonus (really?) of Andrew McCarthy of Brat Pack fame, so it’s a two-fer-one! This ad definitely illustrates the inter-store relationships people tend to form in the close-knit societies of work. Hey, I met my wife of ten years at McDonald’s. So there!

Awww… isn’t he cute? All enjoying a bacon double cheese burger with his hired-actor dad! Honestly, if the folks at IMDB hadn’t alerted me to the fact that this was Seth, I’d have no idea. Cute, though.

Joyously consuming the scenery as much here as he does readily even now, little Benny tries in vain to woo a mysterious caller on the oh-so ancient car phone. He fails, but it sure is funny to watch.

See what happens when a cute, adorable, smarmy little tot goes from a fast food ad to one of cable’s most popular shows? I forgot the point I was trying to make. Oh well. Enjoy!