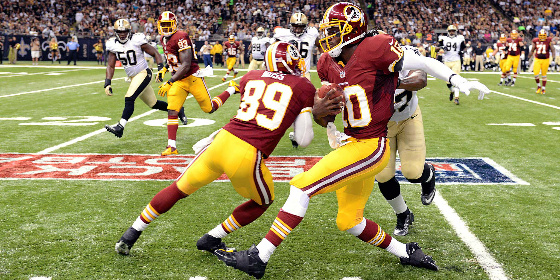 That needs to be your mantra. It doesn’t matter if you won by 40 or lost by 100, it’s too early to blow up your fantasy football team. After a week we don’t know anything for certain, as both great and awful performances may be anomalies based on match-ups, preparation or the position of Jupiter.

Don’t start a fire sale because your early picks failed to perform.

Don’t drop your sleepers because they didn’t break out week one.

Don’t cut a high draft pick because he started slowly.

The key is to improve the bottom of your roster. Look at the underlying stats to see which players might be getting extra looks this year and replace those backups you didn’t want to draft in the first place. Try to take advantage of other teams’ panic moves by acquiring top talent cheaply. Offer trades or pick up players who will benefit from injuries ahead of them.

Most of all, don’t panic. Walk away from the add/drop page and breathe.

And remember, it’s been one week.

Among the expected names like Graham, Gronkowski and Hernandez at the top of the tight end chart for week one was the Ravens nominal backup Dennis Pitta. Baltimore drafted Pitta and fellow TE Ed Dickson in 2010 as replacements for the aging Todd Heap. While the duo has not been able to match the Patriots 2010 draftees Gronkowski and Hernandez they have become a valuable part of the offense, combining for nearly 1000 yards on 145 targets in 2011.

On Monday night, Joe Flacco targeted Pitta nine times, compared to only three times for Dickson. More importantly, Pitta was on the field a majority of the game. With Torrey Smith and Jacoby Jones stretching the field and Ray Rice keeping defenses honest, tight ends should become a bigger part of the Ravens offense this season, and if Pitta emerges as Flacco's favorite target then this week's numbers should be repeatable. 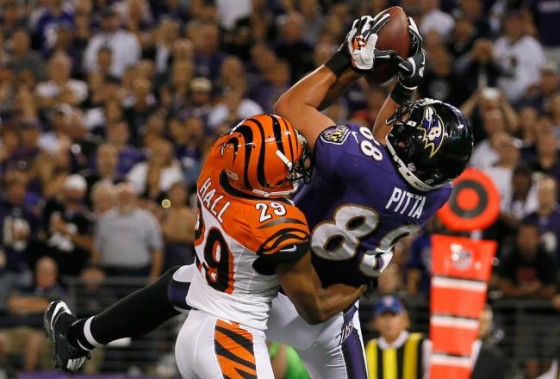 Ogletree exploded in the season opener for Dallas, dominating the Giants defense on his way to a big fantasy night. While eight catches on 11 targets isn't something to ignore, this performance doesn't look to be the new normal for Ogletree. In his 4th season in Dallas, Ogletree had been little more than an afterthought prior to Wednesday night, recording only 164 yards in 2011.

The problem with Ogletree isn't his own talent though, it's his position on the Cowboys roster. The third wide receiver on the depth chart rarely has sustained fantasy value from week to week and with Miles Austin, Dez Bryant and Jason Witten on the roster, Ogletree will have trouble seeing a consistent number of passes from week to week. We aren't saying that he shouldn't be picked up, but there are better waiver options this week. Without an injury to one of the other pass catchers in the Dallas offense we don't see Ogletree ever starting. 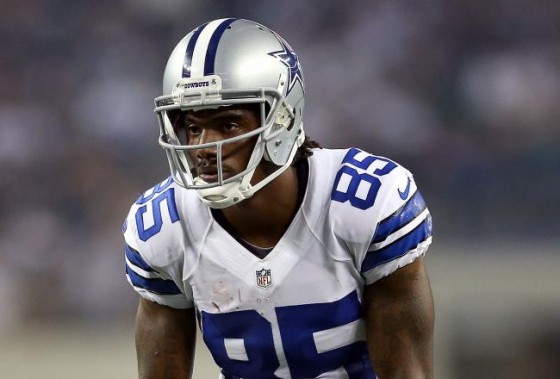 Richardson went early in most drafts due to the lack of elite backs in the NFL. While he might not be in the elite class this season he's still one of the few workhorse backs in the league. What is most noticeable about his lack of success in Week 1 was that the Browns kept feeding him the ball, giving him all but one of the carries in a 17-16 loss to the Eagles.

There are a lot of reasons to be nervous about Richardson for 2012. He is coming off a preseason knee injury, the Browns are starting a rookie QB and they face 2011 playoff teams in four of the next five weeks, including three road games. However, we still like him to live up to his draft position for the season. With no veteran backup, Richardson, if healthy, should get 20-25 touches every week, and eventually break some of those for big gains. The upcoming schedule includes three teams, Dallas, Cincinnati and Buffalo, that gave up big weeks to running backs in Week 1, so the opportunities are there for Richardson. 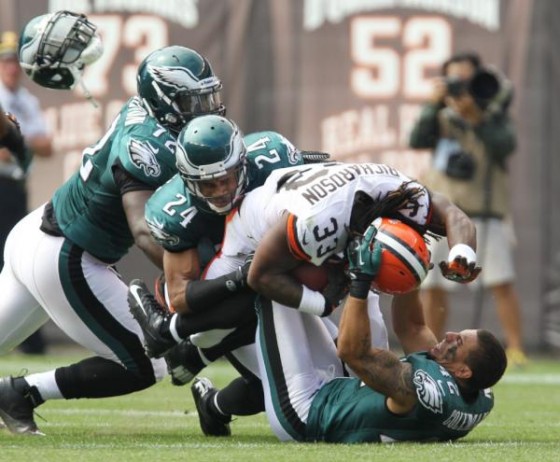 On the opposite side of the spectrum from Richardson is the Falcons former Pro Bowl back. Turner checks all the warning signs for a running back collapse: he's 30 years old, had 300+ carries in three of the last four years and his heir apparent is already on the team in the person of second-year player Jacquizz Rodgers.

The Falcons passing game looks to be making the jump to elite status with Julio Jones adding an additional downfield target for Matt Ryan. With a schedule that includes a number of poor defenses, the Falcons should be looking to protect leads, giving their RBs a chance to pad their stats. The problem is that if Turner can't consistently get first downs, the Falcons will give either Rodgers or Jason Snelling a chance to do so. We aren't saying to drop Turner yet, but be ready to trade him once he posts a big week. 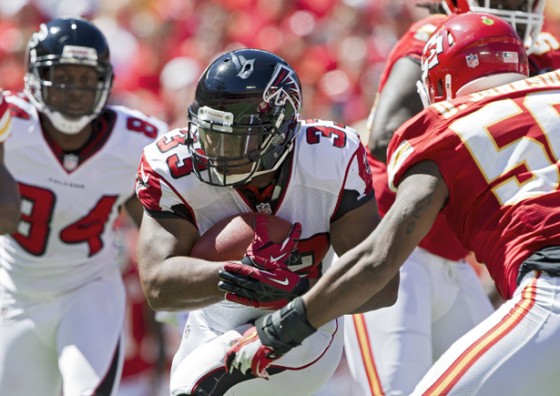 At this very moment, someone in your league is putting in a claim for the Bears backup back based on his two touchdown performance Sunday afternoon. While this performance is notable, it should concern Matt Forte owners far more than it should excite potential Bush owners.

We have no doubt that Bush will post a handful of double-digit fantasy days this year, but the problem is that they will be split with games where he does virtually nothing, and thus impossible to predict. As a short yardage back Bush will see his value spike only in a very limited set of circumstances, which won't happen every week.  We liken it to Willis McGahee's final season in Baltimore, when he posted four double-digit fantasy days, but also posted seven weeks where he failed to score more than three points. 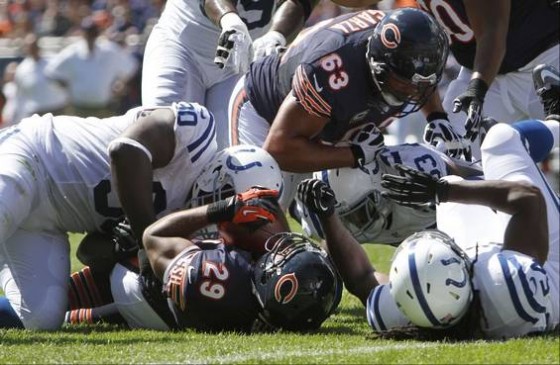 ​Off Field Development Worth Watching

Haden is the best player on the Browns defense and his loss will be a gain for opposing offenses. Cincinnati (A.J. Green), Buffalo (Steve Johnson), Baltimore (Torrey Smith), and the New York Giants (Victor Cruz/Hakeem Nicks) should all take advantage of the absence of one of the league's best young corners. This could also be a boon for the running games of those competitors, as early scores could lead to a clock controlling ground offensive late in games.

Haden's suspension will also force rookie QB Brandon Weeden to play from behind early and often in the coming weeks, leading to increased passing attempts from the Browns offense. 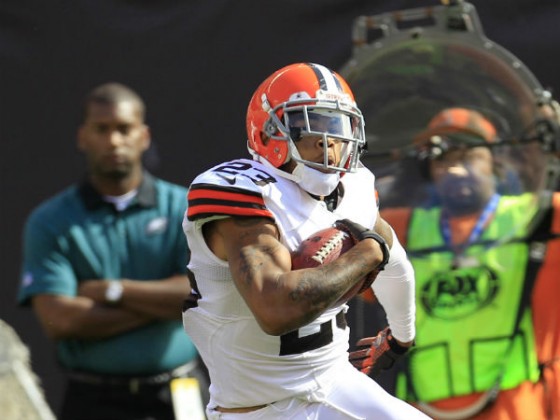 ​Fantasy Injury Of The Week

Fred Jackson, RB, Buffalo: Out 3-8 weeks with a knee injury

Results of the MRI on Jackson's right knee were inconclusive, so we don't have a definite timeline for his return, but the Bills expect to play without him for an extended period. Jackson was drafted as a starter this season, but could find himself relegated to the bench even when he returns if his replacement C.J. Spiller is able to take advantage of the opportunity to start.

While Jackson has only spent six years in the NFL, he is already 31, an age where most running backs tend to break down. With high draft pick Spiller in house the Bills may quickly regret the three-year extension they gave Jackson during the offseason. If Spiller repeated this weekend's performance over the next few weeks he should be able to hold on to the starting role for the rest of the season, with Jackson finding himself trade bait or a salary cap casualty at the end of the year. 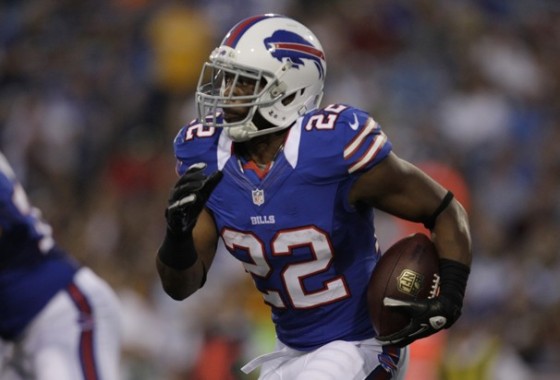 282 players were targeted at least once during week one, but none of them were the Chiefs 2011 1st round pick. After dealing with injuries and discipline problems last season, Baldwin was a popular sleeper pick for this season, but found himself riding the bench for most of Sundays matchup with the Falcons. Baldwin played on less than 30% of the snaps, seeing less playing time than Dwayne Bowe, Dexter McCluster and Steve Breaston. If Baldwin finds himself buried on the bench early in the season it's difficult to see him holding much value. 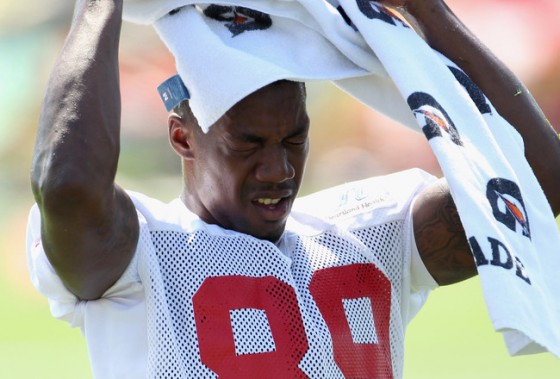 Grab him in case he continues to start, but remember that he is a Shanahan back, so you can't count on him from week to week yet.

As we said earlier, if Jackson is out for an extended period the job in Buffalo is Spiller's to lose and he's still available in a number of leagues.

With Brandon Jacobs and LaMichael James inactive last weekend, Hunter picked up 9 carries for 41 yards backing up starter Frank Gore. With Gore's age and injury history, Hunter has the potential to be a quality starter later in the year.

The Jets are unlikely to enjoy many offensive performances like last week's blowout of the Bills this season, but someone will have to catch the majority of Mark Sanchez's passes. Considering his relationship with most of his returning teammates, Hill has a chance to latch on as Sanchez's favorite target. While two touchdown games aren't likely to happen regularly, we could see the rookie averaging 75 yards per game over the full season.

Nothing will build a quarterback's confidence in a wide receiver faster than catching 8 of 9 targets against a top defense. The Bengals might have found the perfect compliment to A.J. Green in the speedy Hawkins, who thrived in the flats against the Ravens defense.

All three RBs were drafted in the middle rounds with the hope that they would have the opportunity to win the starting spot early in the year either due to a holdout  (Jennings), injury (Gerhart) or Shanahan (Royster). Unfortunately for their owners, it looks like that window has already closed. There are better handcuffs available, so if you need the roster space feel free to drop them to the waiver wire until things change.