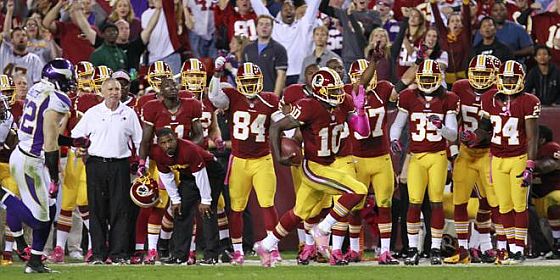 One of the big questions for fantasy players has always been the role of defensive matchups. The rule of thumb has always been to take advantage of bad defenses to elevate players into a starting role only in an emergency, but that might be changing in 2012. This year it appears the rule changes that the NFL has put in place have made all defenses vulnerable to big days. In 2011 only 7 teams gave up 250+ passing yards a game; in 2012 that number has risen to 13 teams. Even more important for fantasy players are touchdowns. In 2011 only one team, the Vikings, gave up two or more scores per game. This year nine teams are surrendering more than two scores.

For fantasy players, the expanding pool of bad defenses has increased the opportunity to find spot starters. While the top passers and receivers are still must-start options, a larger pool of players need to be considered as viable one-week plays. If you have a fringe player matched up with Washington, Tampa or any of the other teams giving up big passing days it’s worth pushing them over steady starters against one of the few elite defenses. This also means it has become less important to carry two QBs in fantasy. There is little point in taking up a roster space to hold on to a backup passer when there are solid spot starters available on the waiver wire in most leagues.

We had Gordon at the top of our waiver wire pickup last week, and the rookie out of Baylor earned our trust with another big week. Even facing double coverage most of the day from the Bengals, Gordon racked up nearly 100 yards in a divisional matchup. While his four targets are worrisome, the other players in the rotation don't have his talent, and Gordon should see more action going forward. With three vulnerable defenses (Colts, Chargers, Ravens) before the bye week, he should be a solid WR3/Flex going forward. 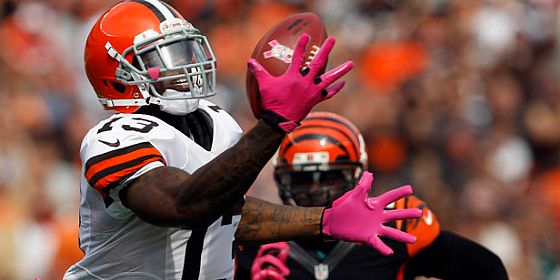 Following Sunday's upset of the New England Patriots, Wilson is again the favorite of sports writers and fantasy players, but we aren't buying in on the rookie signal-caller. While the numbers are impressive, this was against a Patriots defense that has surrendered an average of 356 passing yards over the last three weeks. Seattle is still a run first team, and even with some questionable secondaries on the schedule ,we don't see Wilson being a reliable fantasy starter this season. 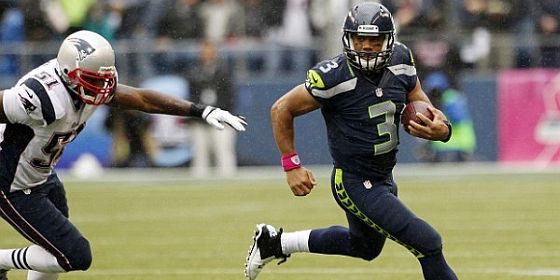 This is the third time in four weeks that Bush failed to break 70 combined yards, as well as the third time that he had fewer than 20 touches. Miami has been unable to mount much of an attack thus far on the ground, averaging only 2.1 yards per carry over the last three weeks. Bush has a respectable 434 yards on the season, but that is inflated by a 172 yard breakout against the Raiders in Week 2.

Even with all those negatives, the receptions are keeping Bush a decent fantasy starter. With rookie Ryan Tannehill under center teams have challenged the Dolphins to win through the air, and they have answered by throwing the ball early and often. While Bush is unlikely to top 70 yards on the ground, if he continues to be targeted 5-6 times a game the opportunity will be there for big fantasy weeks. He's a bigger boom or bust risk than most starting RBs, but his home run potential should keep him in your lineup. 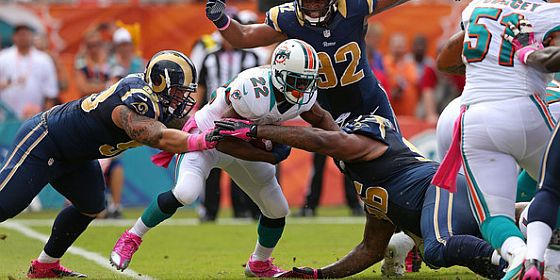 This is less of an indictment of Crabtree's skill set and more our opinion of the 49ers offense. While San Francisco took advantage of the Bills last week (resulting in Crabtree's 17-point performance) this isn't a team that will be putting up huge passing numbers. Head coach Jim Harbaugh would prefer to run the offense through Frank Gore and the rushing game rather than put the ball in the hands of the much maligned Alex Smith, which continues to have a negative effect on the wide receivers. With Mario Manningham and Vernon Davis competing for targets, Crabtree just won't see the ball enough most weeks. With Seattle and Arizona coming up on the schedule there are better starting options than Crabtree available in most leagues. 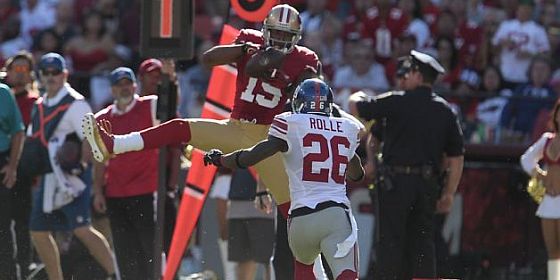 We've mentioned the Rams rookie before, but Richardson is fast becoming one of the better backup backs in the league after another big week. His numbers against the usually stout Dolphins run defense was inflated by a 45-yard carry in the second quarter. Without that long run he averaged a more reasonable 3.1 yards per carry, nothing to get too excited about. What has us more interested is the nearly even split in touches between Richardson and starter Steven Jackson. That distribution has some experts speculating that the job has become a committee, but we don't agree. The Rams took advantage of Richardson's quickness versus Miami, but Jackson should retain the lion's share of the carries as long as he is healthy going forward. 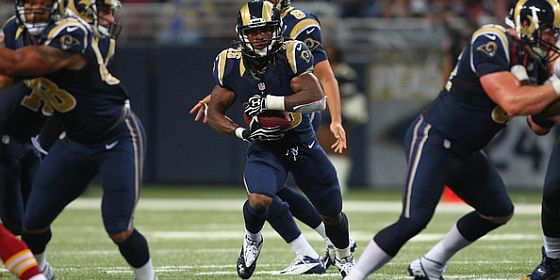 Starting running backs are falling left and right, with DeMarco Murray, Trent Richardson and Adrian Peterson each effected by (hopefully) minor injuries this week. We are spotlighting a backup here, however, since Powell's shoulder, combined with Joe McKnight's ankle, again makes Shonn Greene the unquestioned starter in New York. Without a reliable passer, the Jets will count on Greene to be their workhorse over the coming weeks, and after a solid Week 6 we wouldn't be surprised to see him getting close to 30 carries a week, vaulting him into RB1 status. 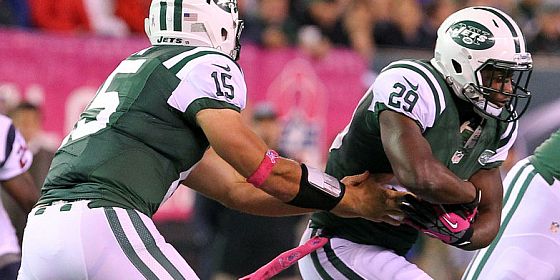 Defensive Injuries Of The Week

The Ravens defense hasn't played well this season, but with three Pro Bowlers now out (including Terrell Suggs) and Ngata banged up, they now appear exceedingly vulnerable in fantasy. The reality, however, might not be as cut and dry as most experts would have you believe. The loss of Webb will have the bigger fantasy impact, as opposing WRs will now see 2011 first-rounder Jimmy Smith in his place.

The question for fantasy owners (and Ravens fans) is what effect the Lewis injury will have. The Ravens went 4-0 when he was replaced last season by Dannell Ellerbe, who will be taking his place again for the remainder of the season. With Suggs expected to return next month and first-round pick Courtney Upshaw still improving, the Ravens could actually improve against the run (currently allowing 136 yards/game) over the rest of the season. 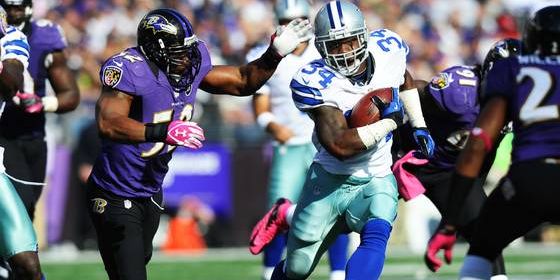 We are at a loss on how to rate the Redskins phenomenal  rookie QB. He's barely averaging 200 yards a game passing through six games, but 11 touchdowns have made him a viable starting option in fantasy. It's hard to find a veteran comparison to RGIII, as most running QBs don't display the passing efficiency that Griffin has in his first six games. He's shown some vulnerabilities (5 fumbles) but has only thrown two interceptions and the Redskins seem comfortable letting him decide games. With a porous defense, the Skins' offense should be in a number of high scoring affairs over the rest of the season. We still would rather have one of the big time pocket passers, but Griffin has earned his way into QB1 territory. 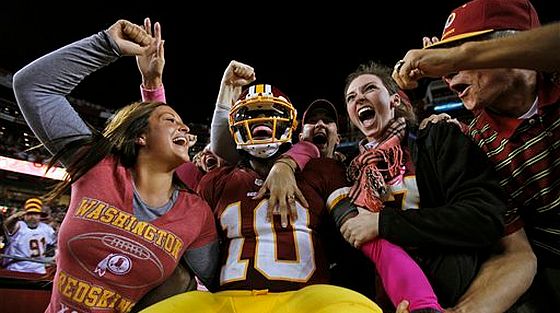 We mentioned Murray's injury early, and if he is unable to play Sunday, Jones becomes a solid RB2. The former starter was never able to lock down the job in Dallas, but could earn additional carries with a big Week 7 performance.

Everything we said about Jones applies to Hardesty as well, as long as Richardson is dealing with a rib injury. Hardesty isn't as talented as Jones and should be considered as a flex play at best.

Peerman doesn't have the opportunity or talent of the previous two backs, but an impressive showing Week 6 could lead to additional playing time for him. A Sproles-lite role could turn Peerman into a flex play, but at the very least he is worth owning for the first time after gaining 76 receiving yards last week.

We mentioned Gibson last week, and we are including Givens here as well considering their low ownership numbers. The Rams will throw the ball, and with everyone bumping up one spot in the receiver rotation there is an opportunity for both players to step up.

While he has yet to score a TD, Myers is quietly having an outstanding season. He's 6th among TE's in receiving yards, and playing with a QB who likes throwing to him. Eventually Myers will start scoring (he dropped a TD in Week 6) and will become a must-start fantasy option. Pick him up now before it's too late. 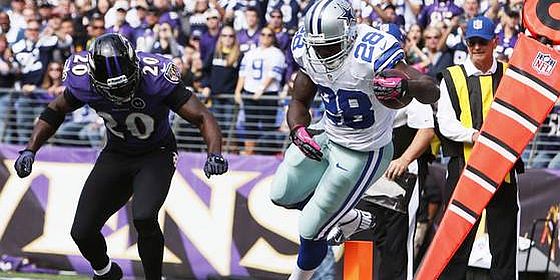 Young is still owned in a high number of leagues despite not doing anything in 2012. The opportunity isn't even there, as Nate Burleson is seeing more targets.

Both players are talented, but aren't in offenses that will make them viable fantasy starters this season. There are better options  out there.

Just last week we mentioned Starks as a speculative pickup for the Packers starting job. Speculation over, he won't be part of the competition.

We are going to continue to mention Hillis as long as he is owned in nearly 40% of leagues. There is no reason for him to be rostered, even as a handcuff to Jamaal Charles, until he shows some sign of being back to 100%.

A popular handcuff in the preseason, with Donald Brown being Donald Brown, but Carter hasn't earned his way into the rotation with Vick Ballard now starting for the Colts. 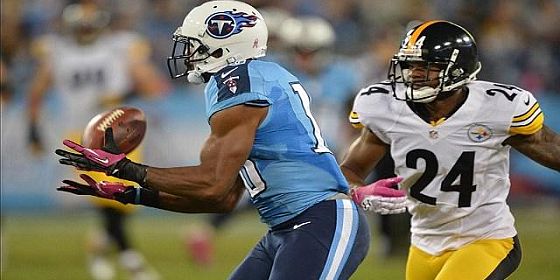