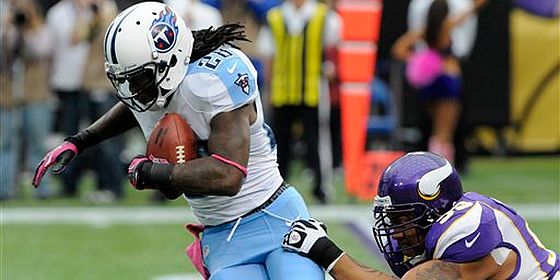 Five weeks of the NFL season are done and in most leagues that means you have played a third of the season. Teams with one or no losses are feeling pretty good about their playoff chances, while owners with teams that have started poorly are desperately trying to improve before it’s too late to make up ground.

We talked about fair trades a few weeks ago, and this week we want to address the other big obstacle to improving teams: draft position. After five weeks players are no longer the same value they were on draft day, and sometimes that’s a hard realization for owners. Just because a player like Alfred Morris went undrafted in most leagues does not mean you can get him cheap, and some players who were drafted early are playing their way off your team. Early round picks like Chris Johnson, Ryan Matthews and Hakeem Nicks have provided limited value to their owners.

The decision you have to make is whether the current performance is their new baseline or an aberration. For players like Nicks, Greg Jennings or Matt Forte, injuries can explain the drop-off from their predicted value. For other players, like the aforementioned Johnson, we have to ask if there is any reason to expect a rebound. Holding on to a player in free fall too long can cost owners a chance to pick up the next breakout player. At the same times, holding out for more value for a “name” player because of their draft position is shortsighted. If you can improve your roster by making a deal, or a waiver wire move, then it’s time to do so.

Waiting forever for a rebound will leave you watching when the playoffs start.

Bradshaw came into the Cleveland game with questions about his performance, health and job status after a lackluster 39-yard performance in Week 4. A 200-yard explosion should answer most of those questions, as Bradshaw showed the explosiveness that has kept him as a viable RB2/Flex the last few years. As important as Bradshaw's performance is, also consider the lack of carries for backups David Wilson and Andre Brown. Wilson recorded only two carries and Brown left the game early after sustaining a concussion during a first quarter kick return. With Brown sidelined, Bradshaw became a feature back worthy of a starting position. 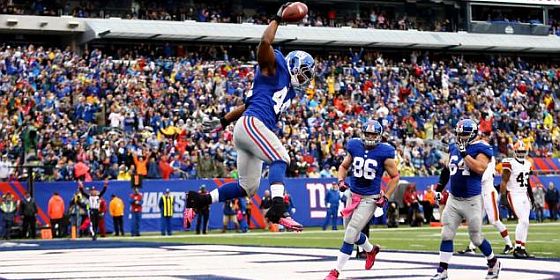 We've been here before with Henderson, so don't let his big game Sunday mislead you into believing he is fantasy relevant again. His 10 targets are nearly as many as he had for the season coming in to the game, and his offensive impact can be attributed primarily to the absence of WR Lance Moore. This was Henderson's first decent fantasy performance since Week 2 of last year, and even with Moore out he's the 4th option in the Saints passing game behind Graham, Colston and Sproles. 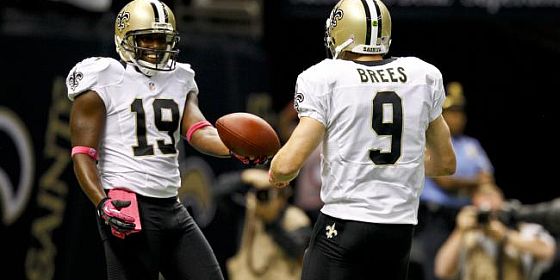 Green-Ellis had a miserable day against Miami's defense on Sunday, but he isn't the first. The Dolphins have given up an average of only 61.4 yards on the ground a week. While Green-Ellis has been held under 10 fantasy points the last three weeks he still is getting the bulk of the carries in the Bengals running game. With the Browns (Bradshaw's Week 5 victim) next up on the schedule, The Law Firm is a definite start. 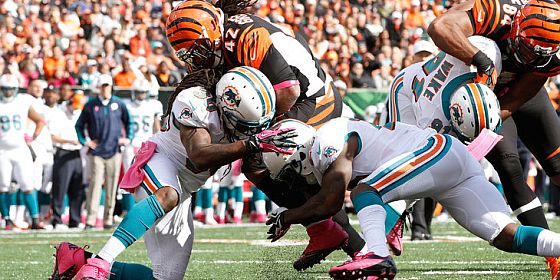 Two weeks ago we told you it wasn't time to panic over Gates' lack of productivity. Two more weeks of sub par performances and we are ready to admit our mistake. Gates is barely averaging 35 yards a game so far on the season, and more importantly he isn't getting looks in the red zone. Jackie Battle's emergence as a short yardage back cuts into Gates' value going forward, and with San Diego on a bye this week it might be time to see if you can flip him on his name value. An impatient owner might be willing to move a recovering Aaron Hernandez, who returned to practice for the Patriots this week. 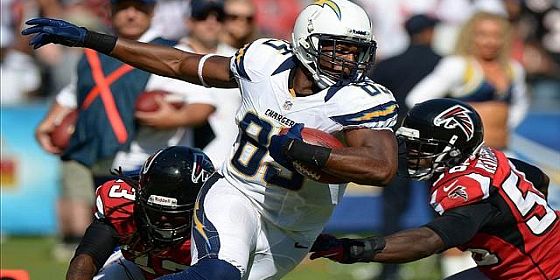 It seems counter-intuitive to call Jones' big score misleading when he recorded virtually the same line on the way to 17.6 points last week, but we don't believe the numbers are sustainable. Jones is still only getting a half dozen targets in the Packers offense, and that is with Greg Jennings out of the lineup. Those 34.2 points over the last two weeks came thanks to bad defense on the part of the Saints and Colts, and without finding the end zone his yardage would have been merely pedestrian. 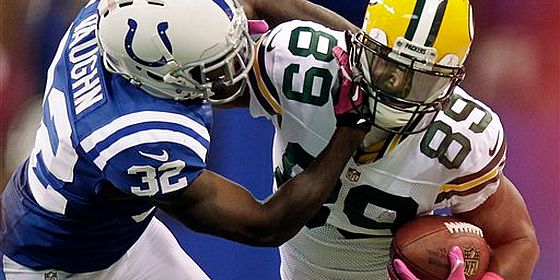 We spotlighted Benson way back in Week 2, and are disappointed to see him sidelined in the midst of a solid campaign. With Benson out, there are points and carries available in the Green Bay backfield, but there is no obvious pickup in the bunch. Alex Green benefited from Benson's absence the most in Week 5, with nine carries, but with John Kuhn and James Starks in the picture none of them are worth starting at this point. 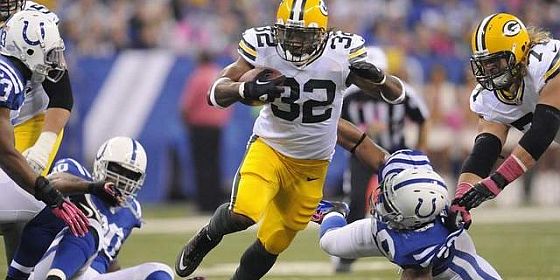 While Houston's offense was supposed to be good this year it's the defense, currently holding teams to only 14.6 points and 275 yards a game, that has driven the Texans to their great start. The team leader in tackles, Cushing is a major part of that defensive effort. With him possibly out for the year expect teams to take advantage, especially in the running game and across the middle. Tight ends Jermichael Finley and Dennis Pitta could benefit in the coming weeks.

We broke down some of the interesting points about the 49ers offensive explosion yesterday, but it's worth mentioning here as well. Fantasy owners have been reluctant to count on either QB Alex Smith and RB Frank Gore this season, but after their big week against the Bills both seem like solid starts going forward. 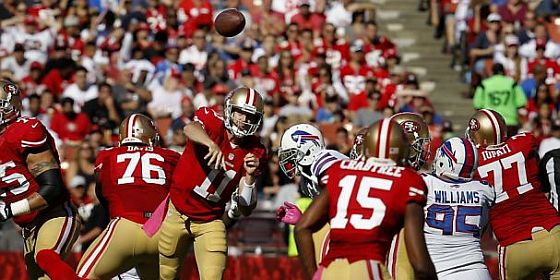 Brandon Weeden hasn't been as bad as expected, and someone needs to be his primary target in the passing game. Gordon had a big week (20 points) in week five, and that may earn him the confidence of the coaching staff.

We really didn't want to believe in Ponder as a fantasy starter, but even with his first two interceptions of the season in Week 5, he still has been a solid starter this season. With Washington's mediocre defense on the schedule this weekend Ponder should be a passable bye week fill in.

Miller was a high profile pickup for Seattle last year, but hasn't earned his money yet. That might be changing after a big week, and the potential for a Matt Flynn start in Seattle. With the shallow pool of TEs available, Miller is a smart pickup as your backup or bottom end starter.

That is the order we rank the potential Benson replacements. While we don't see any of them as starters right now, each is worthy of a pickup on the chance that they pull away from the crowd. 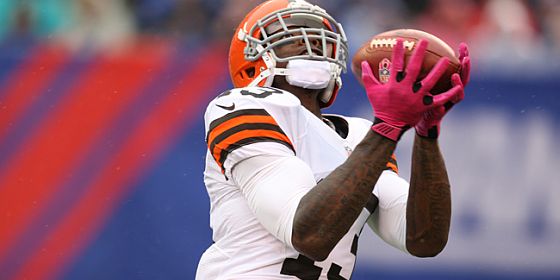 There are a lot of mediocre to awful QBs currently being rostered on a significant number of fantasy teams, and we just don't get it. There are comparable passers on the waiver wire in all but the deepest league, so we don't see the point is wasting a spot on any of these clowns.

His moment of relevance ended when CJ Spiller and Fred Jackson both participated in the Bills blowout loss on Sunday. Even with the poor performance of the rushers ahead of him, Choice doesn't see a clear path to carries

We are done waiting for Johnson to get it figured out. If you can trade him do so, but if there is a better back on the waiver wire we have no problem with saying farewell to the disappointing Johnson.

We mentioned Gabbert on our list of QBs not worth rostering, and will add his rookie target to that pile as well. Blackmon is averaging less than 30 yards a game receiving, and with a bye week this Sunday we don't see the point of holding on to him. 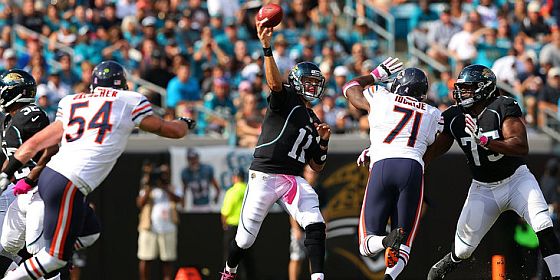