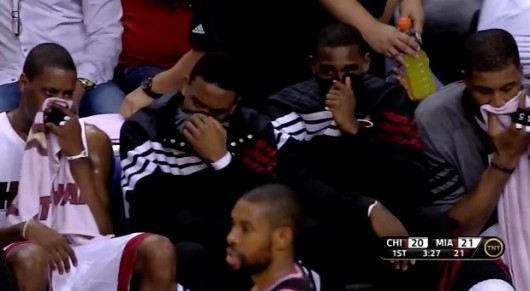 During last night’s key eastern conference showdown between the Heat and Bulls, a  rogue fart ripped through the Heat bench, causing several players to cover their mouths and noses lest they be consumed by foul bowel gas. And of course, Shaq Fu himself was right there to provide color commentary from the TNT studios.

I’m no Sherlock Holmes, but if I had to deduce who the guilty farty is, I’d say Juwan Howard. He’s trying way too hard to look oblivious. Besides, he hardly ever plays so he probably ate a couple of giant bean burritos before the game.