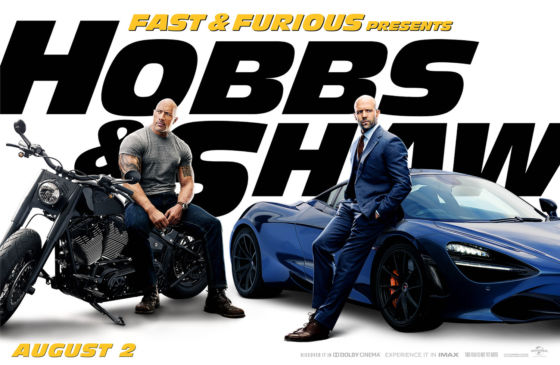 Big explosions. Big biceps. Big EVERYTHING. Yeah, they don’t do anything small with the post-2011 Fast and Furious movies. The stakes keep getting higher and the action keeps getting more and more unbelievable, but we love it. We love it because we get to turn our brains off for a little while and forget everything in our lives for two hours to watch fast cars and musclebound heavyweights battle it out with the fate of the world in the balance. 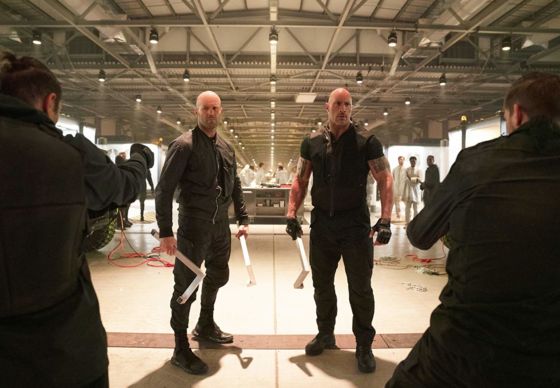 Welcome to Fast & Furious Presents: Hobbs & Shaw, the ninth feature-length film in the Fast and Furious universe, the first spinoff film of the main series, and the first of the series not focused on original characters Dominic Toretto or Brian O’Conner. As you may have guessed by the title, replacing Toretto and O’Conner are DHS agent Luke Hobbs (Dwayne Johnson) and mercenary Deckard Shaw (Jason Statham). Both were, at different points, on the wrong side of the Toretto gang, only to be gently folded into the formula like egg whites into a mousse. 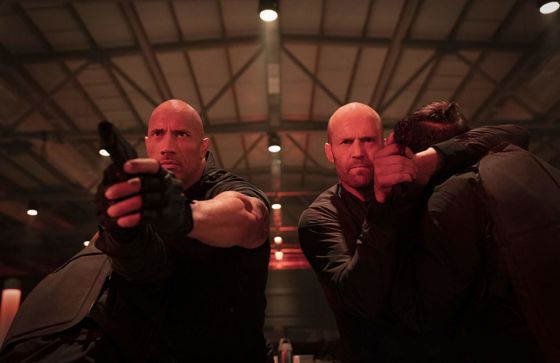 Hobbs we can understand – he had the power to give the Toretto gang their freedom, and he bounces well off of the rest of them. But Shaw… how Shaw fits in is a mystery, seeing how he was directly responsible for the death of fan favorite Han Lue (who died in the third film, but was so popular that they retconned him back into the fourth through sixth films). By all rights, Shaw should be a steaming heap of viscera on Toretto’s garage floor. Instead, he was made to work with the Toretto gang in The Fate of the Furious, and he’s now been paired up with Hobbs on a mission to save the world from a deadly virus. “The kind that melts your insides,” a comic-relief CIA agent informs them. 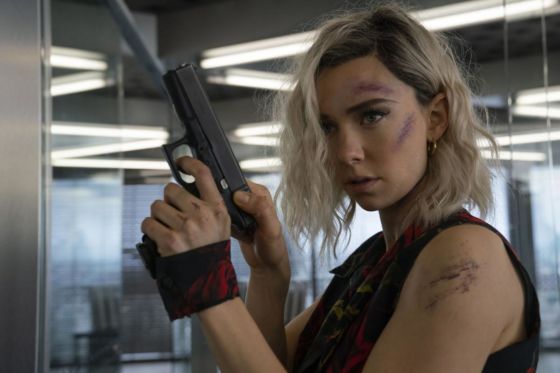 At the center of this mess is Shaw’s sister Hattie (Vanessa Kirby), whose Special Forces team is killed in the film’s prologue and has to resort to drastic measures to keep the virus from falling into enemy hands. And wouldn’t you know it, the enemy – a Terminator-like supersoldier named Brixton Lore (Idris Elba) and the shadow corporation backing him – has set her up to take the fall. Independent of each other, Hobbs and Shaw are pressed into service to find her and the virus, and from there… the best of hijinks ensue. 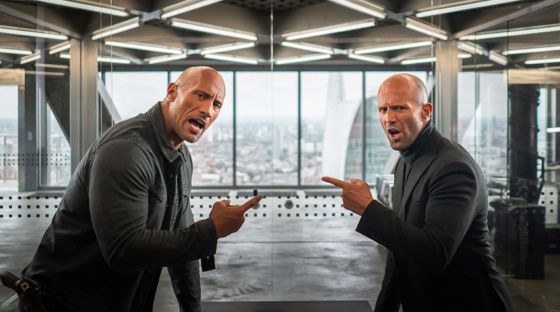 To sum up: they have to deal with each other (the film’s only PG-13-sanctioned “fuck” comes in for huge laughs here), keep Hattie from both the law and Lore, and get this virus under lock and key. No problem, right? Of course, there are problems – we wouldn’t have a movie if there weren’t. Thankfully, Hattie proves just as capable as both men, taking the “damsel in distress” trope out of the equation, leaving us the majority of the movie to sit back and enjoy the barbed back-and-forth between our two heroes. 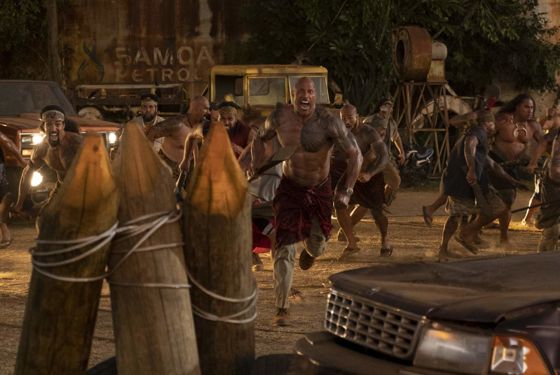 Hobbs & Shaw is a gigantic, masturbatory slugfest with only one thing on its mind: to show off who’s got the bigger set of balls. Will it be Hobbs, whose brute strength provides some of the more gasp-worthy moments during fights action set pieces? Or is it Shaw, whose cunning and lethal ways can get him in and out of any situation? Or is it even Hattie, who’s obviously learned a thing or two from her brother and can match fists with Shaw? Fewer cinematic action trios have been more entertaining and more powerful, and it’s gargantuan fun watching them mix it up with the aim of getting a little of it on the audience. 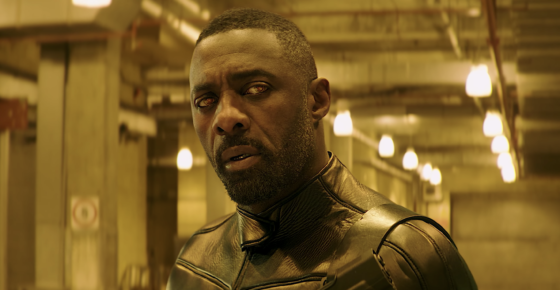 Lore, on the other hand, is something fearsome; not even we know the full extent of how far his body has been altered to allow for the kinds of feats he’s capable of pulling off. The earlier comparison to the Terminator could not be more apt; he’s dangerous in every way possible. Human punches don’t mean anything to him, his ocular heads-up display analyzes attack patterns and striking force, and he’s got a Triumph motorcycle which seems to bend as many laws of physics as he does. (Truthfully, the whole movie throws the physics book right out the window.) He’s nigh indestructible, taking whatever’s thrown at him and begging for seconds and thirds. 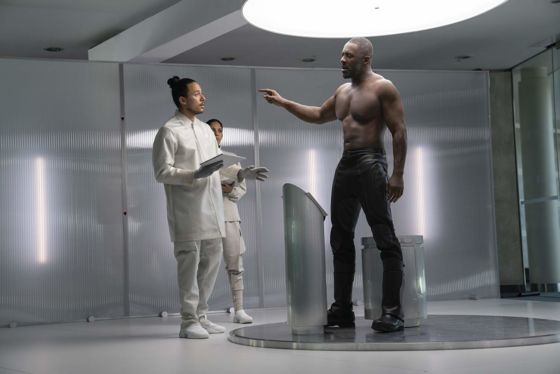 Thematic material doesn’t come into play much; of course, the whole concept of FAMILY! (as cemented in every Fast and Furious film by Dominic Toretto) ties everything together, and there’s a little commentary on the worth of upgraded human versus regular human. But who are we kidding? It’s a Fast and Furious movie, for Christ’s sake. You’re not here for thematic material. You’re here to watch things go boom and petty insults to be whipped back and forth. A couple of random cameos here and there don’t go amiss, but you have to wonder about the reason for them, as they threaten to take you out of the movie just a little bit. 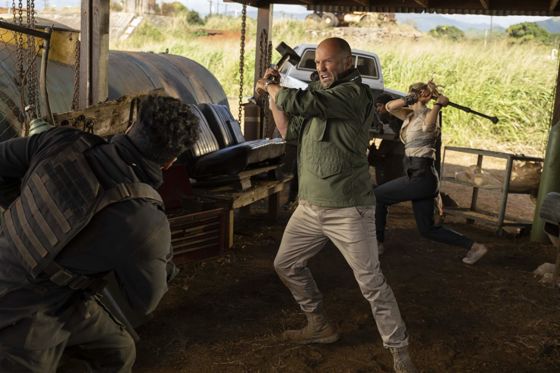 But it’s all for the sake of a Saturday afternoon blow-’em-up, right? Everything good and horrible about American cinema is brought to bear upon Hobbs & Shaw. Director David Leitch takes what he’s learned from his stints at the helm of John Wick (for which he went uncredited as co-director) and Deadpool 2 and allows us to enjoy fights without editing overmuch. True, there are still some sequences which might make an epileptic start to get worried, but for the most part, action is coherent and well done. It’s a surprising quirk about this movie, considering its pedigree of hyper-edited action scenes which leave us wondering where the hell everything is supposed to be in a scene. Obvious CGI work can be a little too obvious at times, but how the hell else would we get Dwayne Johnson free-falling out of a skyscraper and landing on a rappelling baddie? 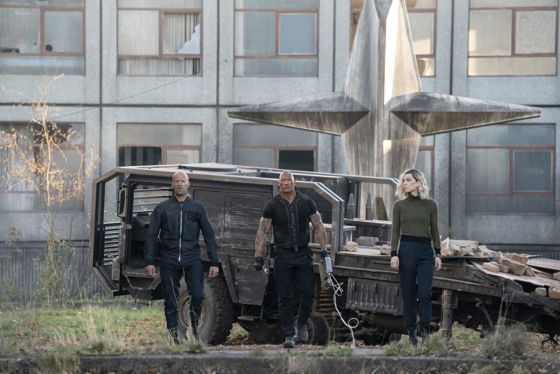 It’s this kind of give-and-take which make films like Hobbs & Shaw a gamble. Thankfully, it’s a gamble which pays off fat dividends, as the quartet of Johnson, Statham, Elba, and Kirby make every minute worthwhile. The Fast and Furious series may have started off in the car racing/heist genre, but they’ve since leaned into a breakneck, go-for-broke formula which has reaped enormous box office profits for the last 8 years. Hobbs & Shaw doesn’t change any of it, giving us a turbocharged, hair-raising time at the movies, powered by its stars’ charisma and what can only be called “Holy shit, did they do that?!” action sequences.

Hobbs & Shaw gives us a turbocharged, hair-raising time at the movies, powered by its stars' charisma and wild action sequences.