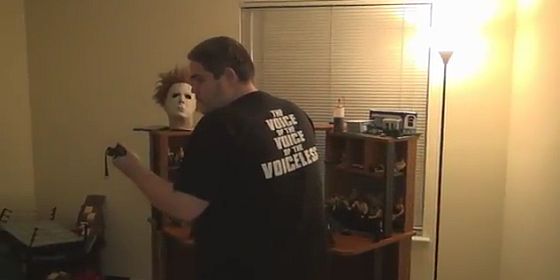 For those of you who skipped, or missed, the WWE’s Royal Rumble Sunday night, the biggest headline was The Rock’s victory over CM Punk. That victory netted The Rock, a part-time wrestler and full-time bad movie actor, the WWE Championship belt. When coupled with John Cena’s victory in the Rumble itself, Rock’s win set up a rematch between the two men for Wrestlemania 29, disappointing fans who had hoped to see new blood enter the top ranks following the PPV event.

One fan, however, took it a little harder than most. In a tantrum that was to be expected from a man with his own replica belt and a room full of WWE dolls, one portly fan loses his mind after The Rock’s final People’s Elbow. (NSFW)

Two takeaways from this clip. First, never trust a man with more WWE memorabilia than furniture and second, when you flip out following a wrestling PPV, don’t upload the video.