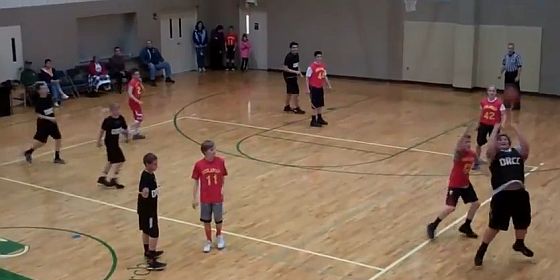 We’ve seen some improbable basketball shots before, but this one might top the list. Courtesy of Bob’s Blitz, we’ve got video of a middle school game from Maryland that includes a finish that even Disney wouldn’t try to portray as real.

In the clip, 8th grade baller Matt December, the pudgy kid with gray sleeves, receives a pass about 15 feet behind the three point line. With his back to the basket, and time running out, Matt lofts the ball backwards over his head for a miracle three point shot.

While his team celebrates the other team stands around their bench stunned, before walking over to congratulate him as well.