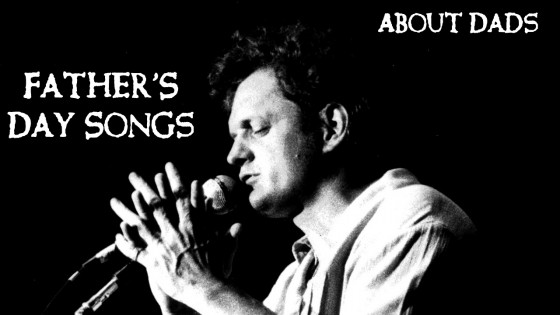 Father’s Day is right around the corner, and what better way to tell your old man you dig him for teaching you to properly toss a pigskin, shave your man jowls without slicing your cheeks to ribbons, and how to change the oil in your Nova than giving him a mix tape of great Father Songs! Fine. But at least it’s better than the shitty ties, repugnant cologne, and box of crappy golf balls you have been thoughtlessly passing off as gifts for the past few decades, right? Look, I personally don’t give a shit what you get dear old dad for Father’s Day, but I do care that you check this list of Father’s Day Songs out, so shut your gob and do it.

This song has, quite obviously, become the father/daughter dance tune of choice at 9 out of 10 weddings, and the sappy, saccharine lyrics tell the whole story. If you want to impress your dad with a song a father wrote about his 16-year-old daughter, this is the one for you.

A story about a son wanting to break free and find his own destiny, but can’t really explain why to his heartbroken, yet warmingly approving father. Stevens tells the tale by singing the parts in two different registers: a low for the dad, and a higher one for the son.

Though this song was originally a German yarn told from the point of view of a young woman regaling the history of her once famous clown father. The song was a hit for Eddie Fisher — not a woman. But, since it’s not too specific as to whom the speaker is, it didn’t come off as too bizarre.

At its core, this is a song about a new father telling his child that he will be there no matter what through all the troubles and trials. Man that’s touching. Think I’m gonna cry.

Billy Ray was a Preacher’s son. The whole song is about a father who doesn’t really approve of the love between his son and a woman (in this case, possibly Dusty herself). A common theme used in a ton of tunes from the early days of great rock and roll. However, in this case, she talks about how Billy really showed her how to be a good girl.

Dusty Springfield – Son Of A Preacher Man by newcanadian

5
Papa Was a Rolling Stone
The Temptations

The lyrics themselves tell the entire story. So listen… carefully. Nah, I’m just kidding. About the listen carefully part. It’s not like they’re hard to decipher or anything.

One of the classic “gettin’ daddy mad” songs, right here. Basically, Madonna (not exactly known for her angelic and pure lifestyle) gets knocked up by her man and decides to tell her father. Obviously he freaks and expects her to deal with it, in the most “get it out of you” way possible. Madonna ain’t havin’ none of it and decides to “keep (my) baby.” Good for her.

3
In the Living Years
Mike and the Mechanics

My dad is still alive and this song still makes me choke up a little. It tells us not to wait until death and the years after to wish you’d spent more time with your dad when you can just as easily do it while he’s still alive. I’m getting all blubbery just thinking about it.

2
Cat’s in the Cradle
Harry Chapin

From Wiki: “The song is told in first-person by a father who is too busy to spend time with his son. Though the son asks him to join in childhood activities, the father always responds with little more than vague promises of spending time together in the future, peppered with images from nursery rhymes. While wishing to spend time with his father, the son continues to admire him, wishing to be ‘just like him’.” To tell ya the truth, I hate this song. But what’re ya gonna do.

Yeah, I could have picked “Tears in Heaven,” a song about Clapton’s son and his untimely and tragic death, but I figured two songs that make me weep openly like a little girl were too much for one list. So, I chose this one. Since it’s about his son whom he sings about in “Tears,” Connor, and his father that he never met, this one seemed more appropriate. One of my favorite Clapton tunes.