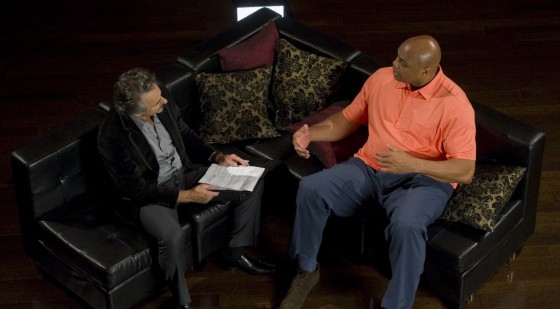 David Feherty has a new show premiering on The Golf Channel tonight at 9:00. Simply enough the show is just called Feherty.

For the first time, fans of popular golf commentator David Feherty can enjoy his unmistakable wit and irrepressible personality on weekly television. The Feherty series will feature what the Northern Irishman-turned-American citizen calls “unfiltered” interviews with well-known and outspoken people from the world of sports, entertainment and golf, along with unique stories and anecdotes from his brilliant, yet zany mind.

We had a chance to experience a live version of the show in D.C. last week, prior to the US Open. If his television show is anything like the live version, than I think it’ll be a hit. Feherty’s humor and humanity make him a delight to watch. “Feherty Live” showcased his improvisational talents, featured PGA TOUR players Rickie Fowler and Fred Funk, and a special salute to the U.S. Armed Forces.

Smartly they have booked a variety of guests, and not just names that only golf fans know. The first four episodes feature Lee Trevino, Don Cheadle, Tom Watson and Charles Barkley. I think the show will have a wide appeal, and I assume it is aimed at bringing the casual fan to the Golf Channel, if they can find it. The show joins a prime-time lineup which already includes The Haney Project and Pipe Dream.