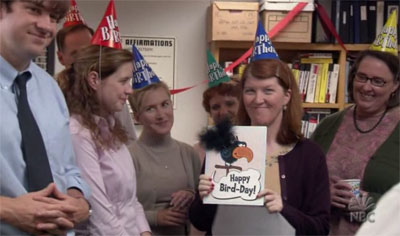 Honestly, I have no idea how they figured all of this out, but the folks over at Flavorwire have created Fictional Character Birthday Calendars for every month of the year. Either this is a ridiculous feat of research, or completely fabricated. Whichever way, it’s pretty awesome though :

We’ve made a series of monthly timelines charting hundreds of fictional birthdays from TV, film, literature, video games, and beyond. Of course, not every day can be Liz Lemon’s or Rambo’s birthday, so a few of us might find that our character birthday soul mate is an obscure anime character or a toddler on a soap opera, but hey, that ain’t so bad.

I’ve included the Calendar for April below, but definitely check out the entire collection over at Flavorwire.