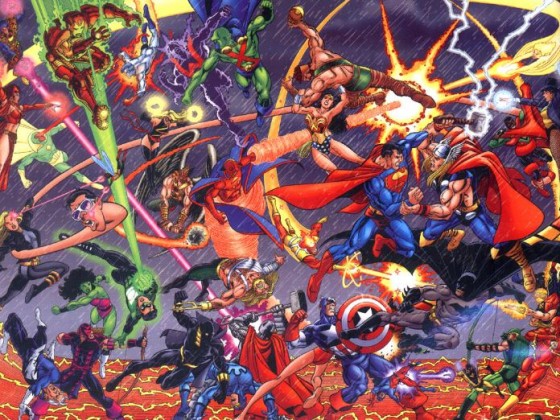 Before proving his point emphatically by making Psycho, Alfred Hitchcock postulated that the reason why most cheap movies were bad was not because they were cheap, but rather because of the people making them. Before Who Framed Roger Rabbit? was made, the creative team decided to throw out all existing ways of doing cartoon/human actors together.

The point? The reason why many meetings of fictional characters in cross universes are terrible is because they are done terribly. There is generally a meeting that meshes two universes together and then there is not much impact on either one. What follows are team-ups which are intriguing, and if done correctly, might be great.

Essentially, one of the main issues with large Cybertronians on Earth is that there are generally only two interested parties. However, if you have seen The Iron Giant, there is an entire invasion force ready to lay waste to the whole planet. The one kind Iron Giant helps to end the siege. We would presume that would only be a temporary measure. We also assume that not every one of these creatures could have a heart melted by a young child.

So, there would be a choice for the Autobots and Decepticons. They could continue to fight each other merely over the planets resources or they could join together to repel a race with legitimate destruction on their minds. Take into effect that the non-transformable Iron Giants have an impressive arsenal of a weapons and you actually have a compelling story. We’ll put it this way — a more compelling story than Revenge of the Fallen.

Think about this one for a moment. You have a ninja level fighter who can’t see teamed with ninja level fighter who does not speak. They were both trained by ancient masters. They both have a heartbreaking back story. Not only that, but there is also the point that it is a wonderful way to start a kick-ass story with people who have disabilities. Of all of the proposed G.I. Joe character team-ups with other fictional characters, these two getting together seems to make the most sense.

There are a lot of reasons why this would be one of the ultimate confrontations of all time. First, you have a master of dream terror invading a psyche which is actually hidden from the person themselves. Second, there are two characters which are basically immortal. Third, there are the razor blades flying like nobody’s business. Wolverine Vs. Freddy is not only action, Wolverine Vs. Freddy is actually legitimate psychological terror. In the dreamscape, literally anything can happen, including getting more advanced answers for both characters.

The Fantastic Four and The Incredibles not only works because they are two great teams, but they are also at their heart great families. This is a superhero team-up where the interaction of the people in their normal life is almost as interesting as the interaction in superhero existence.

Done correctly, one of the best parts to look forward to in this is the lost art of dialogue. If you put the writing in the hands of screenwriter and noted comic book fan Kevin Smith, you might well have a classic which can finally take us out of the doldrums of grim and gritty comic book movies. They could actually remember that they are supposed to be entertainment.

In addition to the sheer fun of combining seemingly opposite entities, there is a tweak here to be done to an existing internet theory. The theory is that Bikini Bottom is actually the nuclear wasteland of the Bikini Atoll. This means that Spongbeob as well as all of his buddies are the result of nuclear testing.

We know that Godzilla is the result of nuclear testing, so his involvement would be an opening to have the whole theory as well as a history of Bikini Bottom presented in a fun manner. Besides, seeing Godzilla interact with Spongebob couldn’t possibly be any worse than seeing Godzilla interacting with that little baby Godzilla thing in the Saturday morning cartoon.