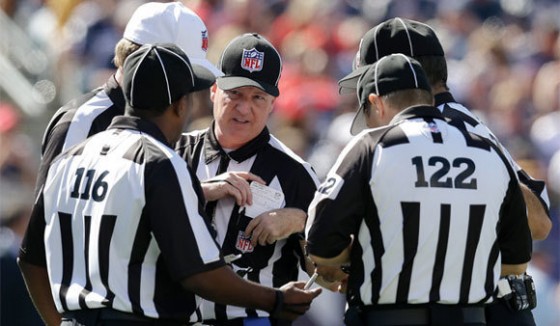 There may be good news for NFL fans tired of the interminable waits that come along with goal line plays. New technology approved today by FIFA will bring “robot refs” to high level soccer, and could eventually lead to similar technology being introduced in the NFL.

The two systems, Hawk-Eye and GoalRef, will use different techniques to track the ball on the field, and notify officials the exact moment that a ball crosses the goal line. With the companies already being approved by FIFA the technology could make its debut at this year’s FIFA Club World Cup, with a possible adoption by the Premier League coming as soon as 2013.

While Hawk-Eye, which uses camera’s to pinpoint the exact location of the ball, might be preferable for soccer, it is the second company’s model that could change the way NFL scoring is reviewed. A quick explanation from the BBC:

GoalRef uses a microchip implanted in the ball and the use of low magnetic waves around the goal.

The system then detects any change in the magnetic field on or behind the goal-line to determine if a goal has been scored.

The process takes less than one second, with the result electronically relayed to the referee.

The ability to show officials the exact moment that a ball crosses into the end zone could have great potential for the NFL. Not only would it let the officials know if a ball in fact crossed the goal line, but it would generate a time stamp that can be used with game footage to determine if a player was down the exact moment the ball crosses into the end zone.

Another possible usage for GoalRef in the NFL would be on field goal and extra point tries. Those same waves could be added to the area between the uprights, allowing officials to know definitively whether a kick was good or not. While there are few occasions where this would come in handy, just the ability to have proof should be enough for the NFL to explore testing it out. For commissioner Roger Goodell, already under fire from players and fans, implementing new fan-friendly technology that will improve the accuracy of on field calls would go a long way toward improving his legacy.