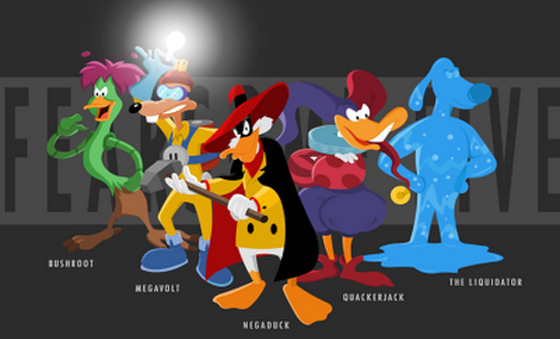 For those of us who lived for after school cartoons, and seriously fell for everything Disney had to offer back when the Disney Chanel wasn’t really impressive, we remember fondly the days when one could catch a lengthy block of shows such as Duck Tales, Gummi Bears, and Tailspin. All was well with the world. And then, as a spin-off of the aforementioned and viciously popular Duck Tales, came Disney’s version of Batman called Darkwing Duck. The cartoon showcased the manic misadventures of Drake Mallard (Darkwing Duck), his adopted daughter Gosalyn, and their assistant/pilot/bumbling sidekick Launchpad McQuack. It was literally an amalgam of everything comic book stories were made of, only drawn and scripted by Disney animation. Simply put, perfection.

During its run, the show featured a virtual superhero team of good guys, and a doubly impressive rogues gallery of bad guys. Darkwing’s friends included GizmoDuck the robot, Morgana the sorceress, and Stegmutt the dinosaur duck. Yeah, those guys are odd enough, but the lineup of villains was even more impressive, and it’s that group were breaking down here. Though there were over 40 baddies during the show’s 91 episode run, there were ten in particular that almost makes one question what kind of drugs were being passed around at the storyboard meetings. So check them out and “Let’s get DANGEROUS!” 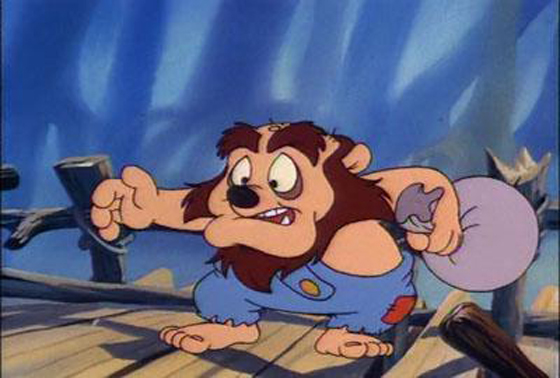 First off, he's a character of 'unknown' origins. And on a show that revolves around anthropomorphic animals... that's saying something. Anyway, hailing from the Bayou, Jake hangs around with a gator named, appropriately, gumbo and is cruel... and very unusual. 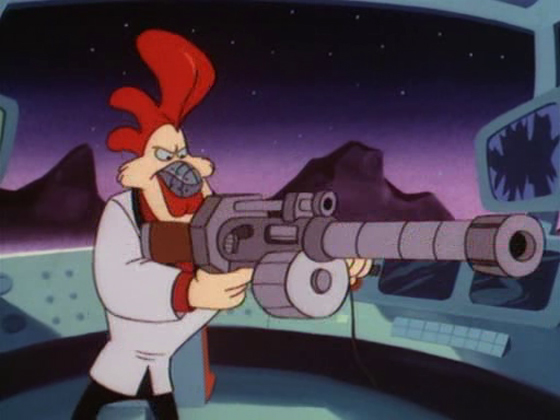 To no one's surprise, Steelbeak is a bird who works for F.O.W.L. (The Fiendish Organization for World Larceny), more specifically, a rooster. A rooster with with a metal beak... a metal beak no one can seem to remember the origin to. Even Steely, apparently. His beak is pretty lethal cuz it's metal... you see. 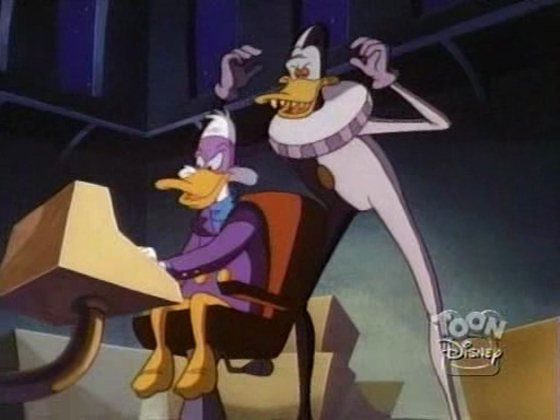 What's scarier than a regular Jack-in-the-Box? If you guest a spirit-inhabited Jack-in-the-Box, then you'd be right. And with his magic will, Paddywhack can make inanimate objects come to life! Because that makes sense. 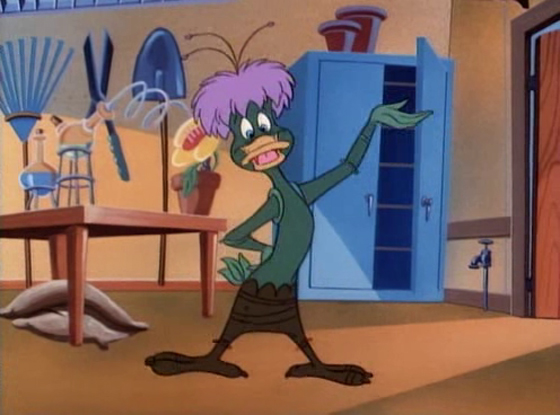 Part of the Fearsome Five (more or less Darkwing and pals' most irritating villainous team) led by Negaduck (yes, that's Darkwing's polar opposite) comes Dr. Bushroot. This mad scientist was fiddling with plant photosynthesis in order to create a serum that allowed regular people (ducks?) to feed themselves via the sun. It kinda worked. And by kinda I mean it turned the Doctor into a half-plant/half-duck. And he can control plant life. The side effects are wacky. 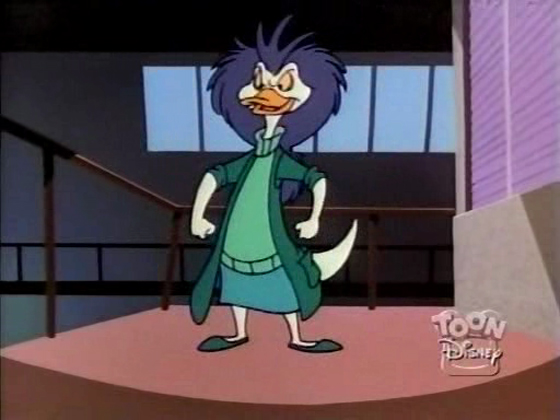 I don't know what Chameleon Essence is, but Camille -- a scientist obsessed with the lizard's ability to blend into their surroundings -- managed to extract it and use it on herself. Guess what? There were side effects. Yeah... she's a chameleon now all the time. 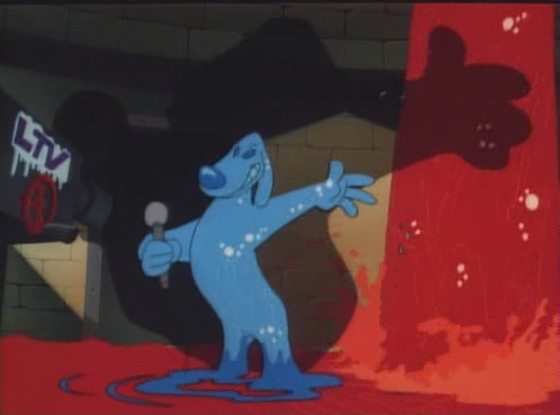 Another of the Fearsome Five, Bud Flud (yep), was a dog who also happened to be a bottled water salesman and something of a shyster. I think you can see where this is headed. Akin to the Joker (sort of), Bud fell into a vat of one of his competitor's water supply which happened to be imbued with some kind of chemical, effectively turning Mr. Flud into a living flood... that is to say a water monster. 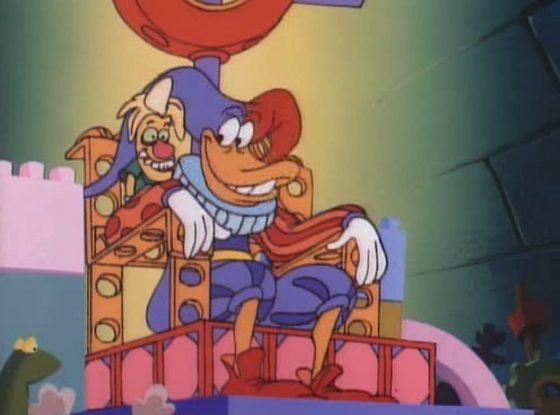 The third member of the Fearsome Five is even more like the Joker because he is completely insane and uses an arsenal of weapons based entirely on toys and other play things. Guess what? He used to be a toymaker who basically went bonkers. No surprise there. Oh, and his little sidekick is a doll named Mr. Banana Brain, who was at one time brought to life by Paddywhack. Go figure. 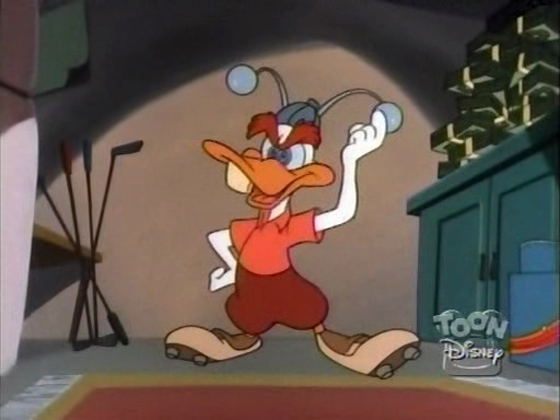 Now we're really heading into ultra wacky territory. This crazy duck was the proprietor of the Gooney Golf miniature golf course and the owner of a hat that could, believe it or not, control ants! So, in a full-on act of ridiculousness, he uses a shrink ray to miniaturize the residents of St. Canard including Darkwing and his pals. In the end, the tiny Terror that Flaps in the Night made Lilliput sick. Of course he did. 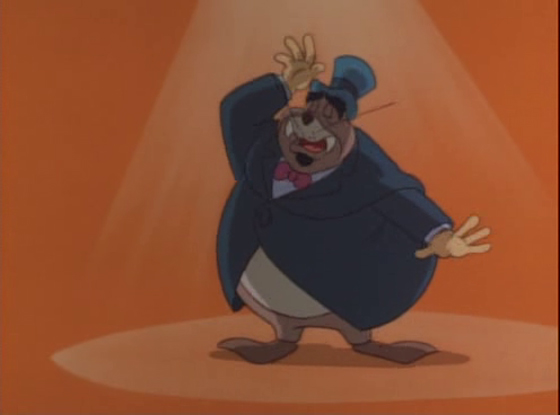 If there can be a comparison to a few different Batman characters, including the Penguin, the walrus Tuskernini is your man. An often failed and pretty lousy film director, Tuskernini uses the movies as a means to perpetrate his myriad of ridiculous and over-produced crimes. He even dresses like one of the old Hollywood directors with the riding pants, the monocle, the ascot, and sometimes a suit coat and top hat. Quite the gentleman. Also, he has a bunch of caper-causing penguins. So there's that. 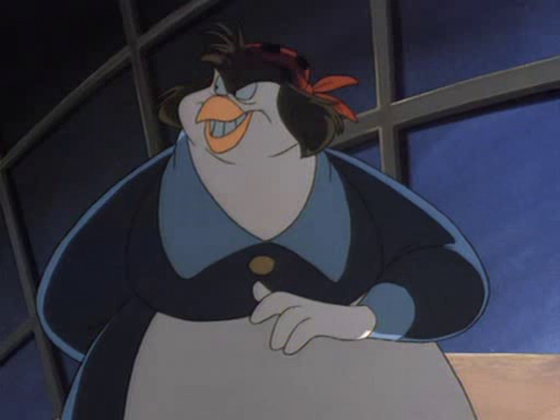 Along with her sinister stinky sister, Ample Grime, these sadistic siblings used to be cleaning ladies when suddenly an experimental bathroom cleaner (wait, what?) was accidentally inhaled making them cleaning-obsessed and filth-obsessed villains, respectively. Because that happens! Worse yet, Ammonia actually fears filth and goes out of her mind when something is dirty. Yes, even her sister. How this fits in as a useful power for an agent of F.O.W.L. is beyond me, but there it is.