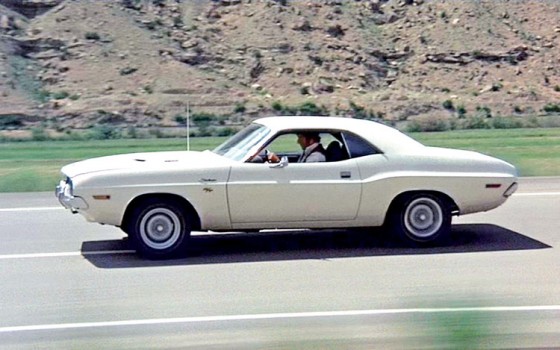 The Road Movie. Next to zombies, vampires, love stories, and slacker comedies, they’re the next most popular go-to formula in Hollywood. Take a group of people (mix matched any way you like), throw in a vehicle and some pavement, drive a shit load, and you’ve got a Road Movie. There have been a ton over the years, but few really stand out as classics that you go to when you really want a decent Road Movie. Here’s fifteen. Get behind the wheel and go!

Truckers form a mile long “convoy” in support of a trucker’s vendetta with an abusive sheriff…Based on the country song of same title by C.W. McCall. Infinite coolness. Ain’t she a beautiful sight?

Ellie Andrews has just, rather reluctantly, wed aviator King Westley when she is whisked away to her father’s yacht and out of King’s clutches. Ellie jumps ship and eventually winds up on a bus headed back to her husband. Against her wishes, she must accept the help of out-of- work reporter Peter Warne. Actually, Warne doesn’t give her any choice: either she sticks with him until he gets her back to her husband, or he’ll blow the whistle on Ellie to her father. Either way, Peter gets what (he thinks!) he wants …. a really juicy newspaper story.

While on a short weekend getaway, Louise shoots a man who tries to rape Thelma. Due to the incriminating circumstances, they make a run for it but are soon followed closely by the authorities including a local policeman who is sympathetic to their plight. The federal authorities, however, have less compassion and thus a cross country chase ensues for the two fugitives. Along the way, both women rediscover the strength of their friendship and surprising aspects of their personalities and self-strengths in the trying times. And then drive off a cliff.

“The Motorcycle Diaries” is based on the journals of Che Guevara, leader of the Cuban Revolution. In his memoirs, Guevara recounts adventures he, and best friend Alberto Granado, had while crossing South America by motorcycle in the early 1950s.

An old man looks back 60 years to a road trip from rural Mississippi to Memphis, a horse race, and his own coming of age. Lucius’s grandfather gets the first automobile in the area, a bright yellow Winton Flyer. While he’s away, the plantation handyman, Boon Hogganbeck, conspires to borrow the car, taking Lucius with him. Stowed away is Ned, a mulatto and Lucius’s putative cousin. The three head for Memphis, where Boon’s sweetheart works in a whorehouse, where Ned trades the car for a racehorse, and where Lucius discovers the world of adults.

Kowalski, the hero of the story, works for a car delivery service. He takes delivery of a 1970 Dodge Challenger to drive from Colorado to Frisco, California. Shortly after pickup, he takes a bet to get the car there in less than 15 hours. After a few run-ins with motorcycle cops and highway patrol they start a chase to bring him into custody. Along the way, Kowalski is guided by Supersoul – a blind DJ with a police radio scanner. Throw in lots of chase scenes, gay hitchhikers, a naked woman riding a motorbike, lots of Mopar and you’ve got a great cult hit from the early 70’s. Mopar?

Bandit and Cledus are two truck-driving southerners who accept a dare from big-shots Big and Little Enos to pick up a truckload of beer from Texas and return it to them within a specified amount of time. Picking it up is simple enough, but as they are leaving Texas, Bandit unwittingly picks up Carrie, a hitchhiking bride-to-be who just left her groom, Junior, at the altar. Junior, however, is the son of Sheriff Buford T. Justice. And when Buford and Junior discover what has happened, they go on a “high-speed pursuit” across the Southeast to catch the bandit. Also Sally Field was kinda hot.

The new one was excellent, but we opted to include the original in our list.

It is a few years in the future… The highways of Australia are ruled by violent gangs who have turned them into a battleground as they loot gasoline and terrorize the innocent. Max Rockatansky is a policeman who had everything… until, a murderous motorcycle gang led by the evil Toecutter burns his partner Jim Goose to death and murders his wife and son, after Max killed their leader “The Knight Rider”. Loosing his shit, Max decides to take the law into his own hands as he sets out to get his revenge on the motorcycle gang and become the road warrior known as “Mad Max”. Also Mel Gibson was kinda hot. Wait, what?

Stuntman Mike is a former Hollywood stunt race car driver who targets and kills women with his “death-proof” stunt car. In Act I, Mike surfaces in Austin, Texas to target a group of women whom he knows; Jungle Julia, Arlene, and local bad-girl Shanna, as well as bar-nut hippie Pam who tries to make Mike notice her, unaware of his sociopath and misogynist tendencies. In Act II, Stuntman Mike surfaces in Tennessee where he randomly picks another group of women to stalk all of whom work in the motion picture business; Abernathy, Lee, Kim, and Zoe -a fellow stunt woman from New Zealand visiting her friends. However, the second set of girls proves more though to get, and because of a combination of bad luck and Stuntman Mike’s carelessness, the girls decide to turn the tables on their tormentor for revenge of their own. Awesome flick.

David Mann is just as his name suggests: an everyman with a mediocre job who has trouble standing up for himself. While driving through the desert to an important appointment, he passes a slow-moving, rusty tanker truck. The driver proves to have a severe case of road-rage and takes offense at this seemingly everyday action, devoting the rest of his day purely to trying to kill Mann. The malevolent driver is never seen, giving the impression that it’s the truck itself that is the aggressor.

All that Neal Page wants to do is to get home for Thanksgiving. His flight has been canceled due to bad weather, so he decides on other means of transport. As well as bad luck, Neal is blessed with the presence of Del Griffith, Shower Curtain Ring Salesman and all-around blabbermouth, who is never short of advice, conversation, bad jokes, or company. And when he decides that he is going the same direction as Neal, well, Page’s luck is only as short as his temper. Some of the funniest scenes in any Hughes movie… “Those aren’t PILLOWS!”

A man and his wife are driving cross-country from Massachusetts to San Diego when their new car mysteriously breaks down. A truck driver stops and assists them by taking his wife to the nearest diner to phone for help. Nothing in this film is quite as it seems, and let’s just say he’s not actually helping her but kidnapping her. Her husband heads out to track down his wife and to take out the kidnappers themselves.

The plot of a cross-country road race is based on an actual event, the Cannonball Baker Sea to Shining Sea Memorial Trophy Dash, -and honestly couldn’t be simpler (a good thing, by the way). Organized by Brock Yates to protest the 55 mph speed limit then in effect in the U.S. The Cannonball was named for Ernest G. “Cannonball” Baker, who in the roaring 20’s rode his motorcycle across the country. Many of the characters are based on ruses developed by real Cannonball racers over the several years that the event was run.

Simply put: Wyatt and Billy are two motorcycle riders (bikers) on their way to Mardis Gras, and encounter hitchhikers, a drunken lawyer, a jail cell, a whorehouse and the death of a friend. Besides, if you haven’t seen this movie, no little synopsis is going to do it justice.

In the near future the ultimate sporting event is the ‘Deathrace’. Contestants score points for running people down as they speed across the country. The sport has crazed fans who sacrifice themselves to the drivers. An overt agency is trying to bring an end to the immoral ‘Deathrace’ and has infiltrated one of their followers in to the race as a navigator. In the end of the race the lives of the competitors, the President and the ‘Deathrace’ itself are in peril.