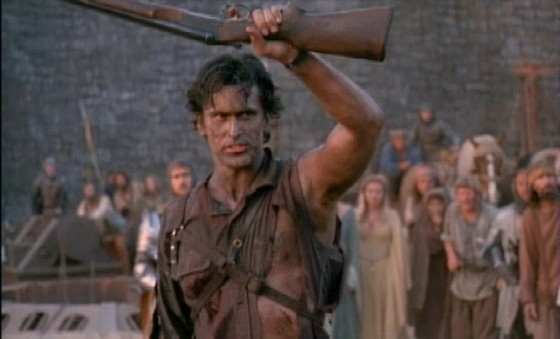 Everyone knows the really amazing weapons: the Light Sabers from Star Wars, Sting, the Orc-loving sword from The Lord of the Rings, or even Indy’s whip for that matter, but few of these weapons would have even needed to be created were it not for the good old gun. You see, Light Sabers were supposedly elegant and were meant to deflect blasts, Indy’s whip was used many times to wrest a pistol from an enemy’s hand… and so forth. But it was always the gun… the original and brutal weapon that really became the most iconic piece for the ages.

Guns have become such a staple in entertainment that they’ve almost gotten white-washed into the scenery. But not every gun, fortunately, shares that same fate. In fact, there are fifteen guns that stand above the rest as classic and more well know than the hundreds of others that have disappeared into obscurity. So let’s take a tour around the shooting range and check out these great guns.

The movie has become a noirish, cartoon classic in its own right, and for good reason: it still stands as the best animation-meets-reality film out there. We all know the story: Roger Rabbit gets framed for murder and only Eddie Valiant (a down-on-his-luck toon detective) can find the real killer. Once back in Toon Town, Eddie leaves the laws of reality behind and must rely on even toon weapons to snag the baddies. And so goes one of the funniest gun scenes in movie memory.

“Set Phasers to STUN!” Yeah, very few people were ever on the ‘kill’ end of a Phaser in Star Trek. Unless you were really bad, that is. Phasers had a very distinctive style and shape that remained largely unchanged throughout all of its series on TV, as well as the Movies. Though it might be impossible just yet, it’s still a cool gun.

The baddie’s name was Francisco Scaramanga, and he was The Man With The Golden Gun. Why? Because he had one, that’s why. But what was the big deal with it, anyway? Well, Scaramanga was a very high-priced assassin, charging an extravagant one-million dollars per kill. But, he always got his target and he only used a very fictional 4.2 mm golden bullet fired from an equally fictitious gun. Oddly -just as it’s happened with ever other bad guy Bond has faced- he was eliminated by an ordinary .32 Walther PPK pistol by Bond himself.

Johnny Dangerously, whose last name is an adverb, relates the story of how he became one of the good guys by putting a hurtin’ on Danny Vermin. As the story progresses, and Johnny grows his status as a big shot, his feud with Vermin continues. One of the greatest and most ridiculous guns in movie history has to be Vermin’s specially-made .88 Magnum. Coupled with a line that likely wouldn’t fly with today’s censors, “It shoots through schools”.

The Gun That Shot Mr. Burns
The Simpsons

In the 23 years The Simpsons has been on the air, they have certainly had their fare share of contrived circumstances. Not the least of which was the whole ‘Who Shot Mr. Burns?’ fiasco. As the sixth season drew to a close, we see Mr. Burns getting shot and literally prat-falling and ham-fisting his way to a really elaborate death throe. Then, the seventh season opens and we get to find out how it all went down. *SPOILERS* It was Maggie. To this day, it has become a bit of a running gag with the writers.

As the story goes, Harrison Ford had contracted some kind of flu and he was feeling really under the weather. Well, a pivotal scene needed to be shot, so Ford, being the consummate professional that he was, told Spielberg to go ahead and shoot the scene anyway. What came about was a bit of ad-libbing on Ford’s part to basically say, “Hey. I may be a pro, but I’m still human.” And the resulting scene will forever be etched in film history.

Speaking of Harrison Ford, his other iconic role (one of many) was that of scruffy-looking Nerf herder, Han Solo. In one of the most hotly debated (recently. originally, not so much) scenes from the retooled Star Wars: A New Hope, we finally get to see Solo for the nonchalant smuggler that he is. Included in this scene is not only the laughable death of one Greedo, but also the first appearance of Han’s blaster, which in and of itself is different from everyone else’s in the trilogy. Great scene and very cool gun.

The Smith and Wesson Model 29 .44 Magnum hand gun. That’s what it is, kids, and that’s the gun Harry Callahan made famous over the course of the Dirty Harry series: Dirty Harry, Magnum Force, The Enforcer, Sudden Impact, and The Dead Pool. But, perhaps the most famous scene of all is the one everyone knows. Enjoy!

Now we’re talkin’! Here we have a character who actually is his own gun! No, not the revamped Megatron from the pretty goofy Michael Bay shit-storms, I’m talking about the Megatron from the original, classic cartoon series who transformed into a Walther P38, and was most often held and fired by sniveling second-in-command, Starscream. Somehow, and this was never really touched upon, the normal sized Transformer that Megatron was, also shrunk while in gun form. Dunno, doesn’t matter. He’s kick ass. That’s what matters.

The Crotch Rocket
From Dusk Till Dawn

If someone was to want to, say, hide his gun really, really well, where do you suppose that somewhere might be? I’ll tell you my first though certainly wouldn’t be anywhere near my balls, but there ya go! The character Sex Machine seems relatively innocuous, until all hell breaks loose and vampires start taking over the Titty Twister. However, just prior, he snags a beer from another patron who, in turn tries to get it back. Well, it’s then we see that his belt buckle doubles as a literal crotch rocket.

Once again we have an extremely iconic gun handled by and extremely iconic character. The cybernetic man is none other than RoboCop: a brutally murdered Detroit cop by the name of Alexander Murphy who gets fitted with robotic enhancements and is returned to active duty as an unstoppable machine. His gun? Well, it’s a heavily modified Baretta 93R and it kicks all kinds of ass.

When you played Contra on the NES, there were two things you pined for the minute you turned it on: the Konami Code and the vicious Spread Gun. The Konami Code was an obvious choice if you wanted to beat the game with 30 lives, but why the spread gone when there was also a laser and a flame thrower? Because, stupid, the Spread Gun fired three ‘bullets’ simultaneously spreading out in three directions: up, straight out, and down. It therefore was the most useful gun in the game, especially if you found a rapid-fire boost. Well, then you’d be pretty much invincible!

Hellboy is Mike Mignola’s tale of a living demon who has the ability to destroy Earth, but is a good guy working for a paranormal investigation team. He is one of many bizarre creatures, and those with powers, under the company’s employ, which also includes Abe Sapien (a bizarre fish man) and Liz, an astute pyrokenetic. But it’s Hellboy who stands out as the one with the coolest set of guns, to best of which is called Big Baby, an over-sized revolver that shoots grenades. Very cool.

As cool as these weapons are (and they are, having made their initial appearance in FF VIII) the Wiki description of them is much more… ridiculous than even I could have come up with:

That’s what I thought.

The Boomstick!
Army of Darkness

There is no cooler scene featuring a gun than the one that shows Ash, of Evil Dead fame, schooling the screwheads on exactly what his boomstick is. Shop smart, shop S-Mart… YA GOT THAT!