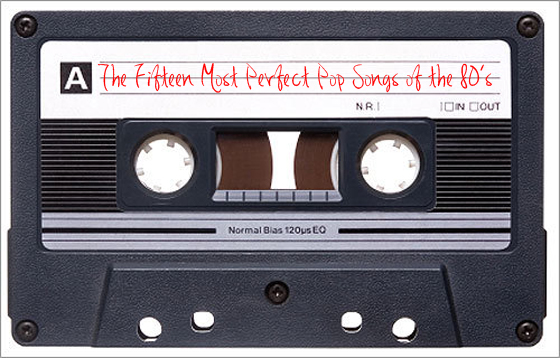 The music of the ’80s offered us so very much. There was the vast array of hard rock bands coming out of L.A., like Mötley Crüe and Guns N’ Roses, and those others performing cookie-cutter tunes that sounded like everyone else — Firehouse, Slaughter, Trixter and Warrant. And then there was the sound made from carryovers from decades hence, like Aerosmith, Billy Joel, Eric Clapton and a host of others who tried (sometimes with success) to fit the ’80s style genres. Which isn’t to say these bands and the music they made weren’t exceedingly popular, because they were… but what we’re going is ‘Pop’ music in the more traditional sense of the word.

What we’re going by here is the sound you just know is from the ’80s: synthesized, ever-so-slightly morose, full of deep meaning and heartache and, more often than not, a one-hit-wonder that hits hard for its time, and then disappears to make room for another tune slightly similar. I’m sure there are more than fifteen of these, but I truly believe this group defines what it was to be a pop song in the ’80s.

What makes this song so impossibly enduring and endearing? Well, few other songs begin with such an epic synth-pop explosion and then immediately burst into a slurry of trite lyrics, eye-rolling rhymes, and a chorus you can get everywhere from a church to a prison yard to sing to. Europe knew what they were doing and they did it really well.

When it comes to thumping dirges riddled with keyboards and monotonous lyrics that we all love, it's hard to go wrong with Annie Lennox and Eurythmics. Even the name alone implies rhythm and... ics? I don't know, but it sounds cool. This is absolutely a song that shoves the '80s down your throat.

I'd be willing to bet that once the opening "Poor old Johnny Rae" lyric is done, the rest is just indecipherable garbage, right? Yeah, but it doesn't matter. There is just something so right about a Celtic-mashed, hoppy-poppy rock song that sticks in your brain for days. Too-Rye-Aye!

None of us were quite sure just what Boy George was back in the day, but what we were positive about was that the cat could sing. From the droning whine of the haunting harmonica, all the way through lyrics like, "Loving would be easy if your colors were like my dream..." What? Doesn't matter. It's an anthem for the decade, all the way.

Not the one and only movie theme on here, but maybe the one that really defined what it was to be a tongue-in-cheek homage to a classic comedy-horror featuring (in the video) a call-and-response backing track where even the stars of the film made appearances. It's a sly, busy tune that you know from the very first note.

Maybe you remember this best thanks to the recent car commercials. Or, if you're like me, you remember it best because it still holds a special place in that All-80s drawer in your brain. Either way, the soft, breathy, punchy lyrics of "True" sound just as good now as they did in 1983.

For such a simple song, "Tainted Love" really gets the point across nicely. There's rhythmic drums that make you feel like it's a heart about to be crushed... or maybe it's a throbbing headache because this guy's not sleeping much, according to the tune. Doesn't "Tainted Love" sound filthy more than sorrowful? Or is it just me.

Andrew Ridgeley. That's the answer to the trivia question, "Who's the other guy in Wham!" Glad you wondered, aren't ya? Anyway, this is one of those songs that falls squarely into the love it or hate it categories. You never hear anyone say "Wake Me Up Before You Go-Go" is just okay. I happen to love it because it oozes with '80s excitement and effortless energy.

It helps to have seen the video, though it isn't a prerequisite, to understand that this song is one long apology by the male vocalist, and a not-quite-as-apologetic reply from the female counterpart. You see, he was unfaithful, and he's sobbing about it since it happened during their break-up. As it turns out, she was just as much at fault. Isn't that sweet? Well, they are "only human." See what I did there?

Maybe not the most clever song in the annals of '80s pop music, but it certainly is one of the greatest videos of all time. So much so it was parodied on Family Guy. If one thing is going to be long remembered about male vocalists from the 1980s, it's their penchant for reaching testicle-numbing heights with their singing.

If you say you knew of Blondie and Deborah Harry before her hit-parade days of the early '80s, then you knew her in her underground punk phase that hit mid-70s. She was never as popular in the States as she'd become when her classics like "Heart of Glass," "Rapture" and this one, "The Tide is High" were released. Though this is a cover from a Paragons song, Blondie definitely made it her own and an instant classic for the decade.

I can think of exactly zero other songs where a Vegemite sandwich plays such a prominent role. And why is that important? Because this tune is definitely about profiting off Australia's ways. Never before had we heard a song riddled with so many cultural references and a story about a man who's obviously lost... and obviously Australian. "Travelling in a fried-out Kombi, on a hippie trail, head full of zombie." Indeed.

Speaking of cultural songs, Toto did a bang-up job taking us all to the Dark Continent with their song about travels and life in Africa. However, as it's admitted by the band, none of them had actually been there, so the song is about a white man attempting to write a song about Africa based entirely on what he's seen on documentaries. Either way, it's an epic and swooping masterpiece and absolutely fits brilliantly on a '80s pop list.

This song gained a resurgence in popularity (probably even more so than from its initial release) after the movie Napoleon Dynamite hit theaters. If you remember, it plays in its entirety over the final tether-ball game and the end credits. The song did chart and became the only hit for the band When in Rome, but as classic pieces of '80s pop cheese go, this is absolutely one of the greats.

I think it's safe to say we owe a great deal of thanks to director John Hughes and his film The Breakfast Club for kicking this song's eminent popularity in the ass. And it is, without a doubt, the quintessential '80s song. It's melancholy, yet poppy, and lonesome, yet you can dance to it, and it has some amazing lyrics and a tune that'll never, ever leave your head. It's definitely my pick for the best pop song of the decade.