Media > Comics > 50 Simpsons Facts You Might Not Have Known

One of television’s most endearing and enduring classics is everyone’s favorite jaundiced family, The Simpsons. Hanging out and making us laugh on a regular basis for nearly 25 years, the Simpsons long ago began to feel like a regular family that we’ve all come to know and love and whom we all secretly wish we could be a part of. Of course they’ve had ups and downs: great seasons, good seasons, and seasons we’d all soon forget… but it’s those qualities that really give the Simpsons their staying power and strength. They’re funny, clumsy, often uncomfortable, familiar, and simply a part of the American lexicon. So, sit back, turn off your busy brain, and check out fifty bits of Simpsons Trivia you might not know. Oh, and just so it’s clear, just about 90% of these were taken directly (not word for word) from Wikipedia and have been cited as such.

Production, Animation, and The Cast:

50. Initially, Matt Groening submitted only basic sketches to the animators and assumed that the figures would be cleaned up in production. However, the animators merely retraced his drawings, which led to the crude appearance of the characters in the initial short episodes. (Wiki)

49. In 1989, a team of animators submitted Groening’s artwork to FOX, a team that would eventually go on to become Clasky-Csupo most famous for Rugrats. (Wiki)

48. Brad Bird, now most well known for his roll as a director for such PIXAR films as The Incredibles, Ratatouille, and his adaptation of The Iron Giant, was one of the original directors for The Simpsons. (Wiki)

47. Yeardley Smith is the only regular voice actress (Lisa Simpson) who typically voices only one character. Though she can be heard doing a minor voice in the background here and there, Lisa is her one and only. (Wiki) 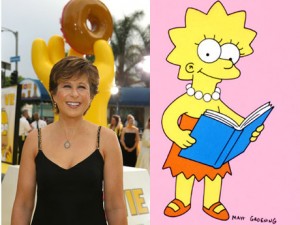 46. From 1998 through The Simpsons 20th Season, the voice actors have gone through various pay increases and holdouts for more money. Their salaries have jumped significantly from $30,000 per episode to over $400,000. And rightly so. (Wiki)

45. Up till his untimely and tragic death in 1998, Phil Hartman (SNL) was a recurring voice over. However, after his passing, all of the main characters he voiced were retired out of respect. (Wiki)

44. The Simpsons holds a few records, but one that has them landed squarely in the Guinness Book is a rather odd one: “Most Guest Stars Featured in a Television Series”. (Guinness)

43. The only time Homer was not voiced by Dan Castellaneta was during the episode, “Homer’s Barbershop Quartet” where it was voiced by a member of the singing group The Dapper Dans. (Wiki)

42. Homer’s persona has gone through the largest number of significant changes. Originally, he was just plain mean and then more of a self-aggrandizing pig. But eventually, from seasons 9-12, he became the Homer we know today — oafish, occasionally jerky and always funny. This is when, many have said, the show finally became “a cartoon.” (Wiki)

41. When it comes to Homer, the writers often debate how far to go in portraying Homer’s stupidity; one suggested rule is that “he can never forget his own name.” (Wiki)

40. When was the first time the audience witnessed Homer physically strangle Bart? The first instance of Homer strangling Bart was in the short “Family Portrait.” According to Matt Groening, the rule was that Homer could only strangle Bart impulsively, never with premeditation, because doing so “seems sadistic.” (Wiki)

39. Sadly, Homer’s IQ is only 55. This is hereditary and it looks as though Bart is next in line. (Wiki)

38. However, in a 2001 episode named “HOMR,” a crayon was discovered lodged in Homer’s brain (due in large part to his cramming it in his nose as a youth) and once removed, jumped his IQ to 105. However, once realizing he had become an insufferable bore, he had it replaced, lowering his intelligence to its former level. (Wiki)

36. Though Marge herself would have likely decried, or at the very least argued with herself about it, she was the cover model for the October 16th, 2009 edition of Playboy in an attempt to both celebrate the 20th Anniversary of the show, and appeal to a wider, younger audience. (Playboy)

35. While Bart is (probably) only around 10 or 11, he has actually held four full- and part-time jobs: He worked as a bartender at Fat Tony’s social club in “Bart the Murderer” (season three, 1991); as Krusty the Clown’s assistant in “Bart Gets Famous” (season five, 1994); as a doorman in Springfield’s burlesque house, the Maison Derrière in “Bart After Dark” (season eight, 1996); and briefly owned his own factory in “Homer’s Enemy”. (season eight, 1997). (Wiki)

33. Bart has precisely 9 (concurrently visible) spikes of hair on his head. (Wiki)

32. In 1995, Lisa made a decision marking her one of the first TV characters to do so: she became a permanent vegetarian. (Wiki)

31. Oddly, The Simpsons has never been nearly as popular in Japan due to the show’s vulgar themes and filthy humor. However, when Japanese media switched focus on the show to Lisa (as opposed to Homer or Bart) the show found a new fan base and higher ratings. (Rollins College – FL)

30. Though Maggie is typically heard in only pacifier-sucking sounds and occasional squeaks and baby-type noises, she has been voiced five times in the show by Liz Georges, Harry Shearer, James Earl Jones, Elizabeth Taylor and Jodie Foster. (Wiki)

28. Maggie’s stamp was voted the consumer’s favorite after the USPS’s 2009 release of the commemorative Simpsons set. (USPS)

27. Abe (Grandpa) Simpson has two brothers: an older brother named Cyrus, who lives in Tahiti and has multiple native wives, and a younger brother named Chet, who owns a unsuccessful shrimp company. (Wiki)

26. Abe inexplicably carries a card listing him as the president of the Gay and Lesbian Alliance. (Wiki)

Part 2 – The Town of Springfield

23. Despite many contradictions to the fact, Jasper Beardly has a prosthetic left leg. (Wiki)

22. Kent Brockman might not be, well, Kent’s name. Twice he’s been given different names. In “Mother Simpson” he was known as Kenny Brockelstein in a ’60s flashback, and in a comic he was once called Brock Kentman.

21. Brockman is the source of the idiom I, for one, welcome our new [fill-in-the-blank] overlords, which is commonly used on Internet forums when a “participant vastly overstates the degree of oppression or social control expected to arise from the topic in question,” or to express mock submission, usually for the purpose of humor. (Wiki)

20. In the episode “Flaming Moe,” it is hinted Bumblebee Man might be a Furry, as he appears in a crowd with a group of fellow Furries at a rally to elect Moe Szyslak into office. (Wiki)

19. Did you know that Mr. Burns’ utterance of “Excellent” and the sinister tenting of his fingers is a direct similarity to Davros creator of the Daleks from Dr. Who? (Wiki)

16. In a recent season episode, it is revealed that Comic Book Guy has a cousin named Comic Book Gay who uses the catchphrase, “Worst. Stereotype. Ever.” (Wiki) 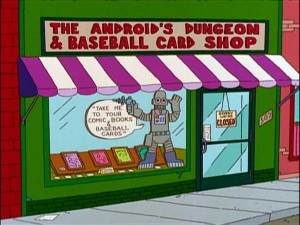 13. The hip gyrations and thrusts made popular by Duffman were first acted out and performed by Brad Bird himself.

12. “Today on American college and high school campuses, the name most associated with the word Christian—other than Jesus—is not the Pope or Mother Teresa or even Billy Graham. Instead, it’s a goofy-looking guy named Ned Flanders on the animated sitcom known as The Simpsons. The mustache, thick glasses, green sweater and irrepressibly cheerful demeanor of Ned Flanders, Homer Simpson’s next-door neighbor, have made him an indelible figure, the evangelical known most intimately to non-evangelicals.” (Christianity Today)

11. Professor Frink once conceived of an invention call the Intra-Bovine Ice Cream Maker that, making use of a cow’s four stomachs, would make ice cream directly inside the animal. (Wiki)

10. Professor Frink has a computer coding language named after him. (Wiki)

8. During his tenure as showrunner (season five and six), David Mirkin was asked by the Fox network not to do any more Itchy & Scratchy cartoons due to the amount of violence in them. In response, the show produced “Itchy & Scratchy Land.” The network asked them not to do the episode and threatened if the episode was produced, they would cut the Itchy & Scratchy parts out themselves, but relented when Mirkin threatened to tell the media. The writers nevertheless promised to try not to overdo the violence and in some scenes the violence was cut. (Wiki)

7. In 2003, Krusty was included in a special history of Jewish entertainers exhibit at the Jewish Museum in New York City. (Wiki)

6. Kang and Kodos have appeared in at least one segment of every one of the “Treehouse of Horror” episodes.

5. Kang and Kodos’s names are derived from two Star Trek characters: Kang was a Klingon captain portrayed by actor Michael Ansara in “Day of the Dove,” whereas Kodos the Executioner was a human villain from “The Conscience of the King.” (Wiki)

4. Rather than actually own a Bible, Reverend Lovejoy borrows it from the Springfield library every week. (Wiki)

3. Of the many odd things that Nelson Muntz has taken a liking to, the weirdest are his admiration of Andy Williams, his ability to correctly prepare huckleberries, and being an adept master of disguise. (Wiki)