Media > Television > Fifty Years of Doctor Who in Caricature

Fifty Years of Doctor Who in Caricature 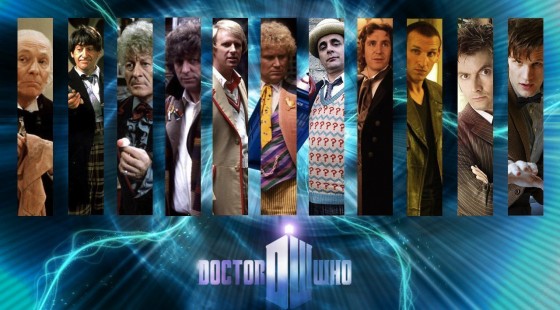 For those in the know (and now for those who aren’t), 2013 is the 50th Anniversary of the British cult classic, Doctor Who. That’s right, Whovians, (well, I guess those of you calling yourselves ‘Whovians’ already know this, but I digress…) way back in November, 1963, the other side of the pond let loose with the TARDIS-piloting time-traveler known as The Doctor. And, more or less, ever since, its popularity has barely ebbed an inch.

Okay, maybe that’s not entirely true because from 1996 to 2005, it kind of went away. But let’s not talk about that here, because ever since its BBC and American resurgence in 2005, it has taken on a whole new life, thanks to Christoper Eccleston, David Tennant, and Matt Smith, Doctors 9, 10, and 11. The stories have been modernized, energized, and absolutely polarizing. But, let’s not forget that there were 8 more who donned the Doctor’s guise from ’63 to ’95, and here we’re going to see them all and learn a little bit about them with some trivia you might not have known. So, on with the show. Oh, and just so we’re clear, I (my own self) did all the caricatures because I am such a fan. Enjoy!

Time Traveling Trivia: Hartnell’s filmography is seemingly endless and he appeared in over 72 movies. Sadly, since he did pass in 1975 and they are building a 50th Anniversary of The Doctor, he definitely won’t be in it. Obviously. However, the great character actor David Bradley (Argus Filch from Harry Potter) will be portraying him. 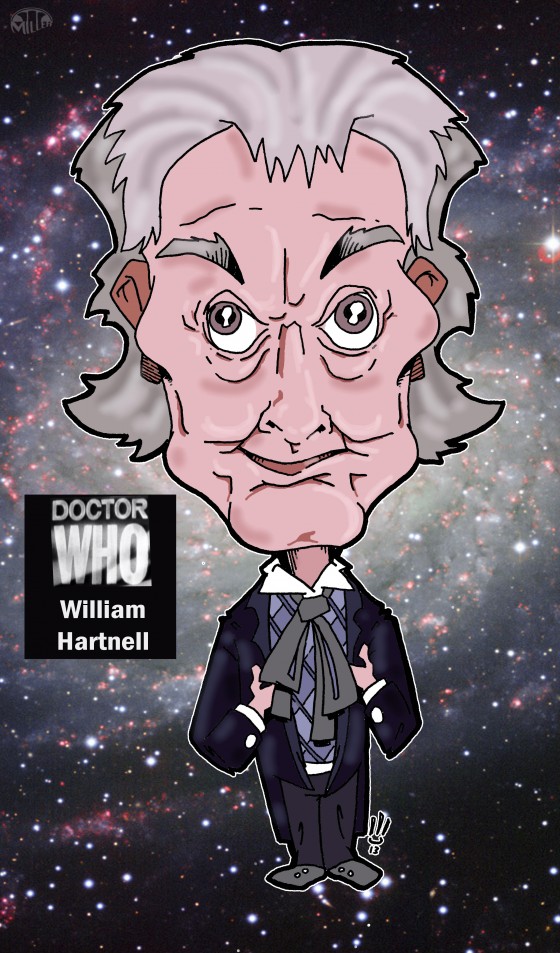 Time Traveling Trivia: Patrick Troughton was said to be literally the only guy who could fill in Hartnell’s Whovian shoes, thanks to his vast character acting background. Fortunately for the rest of us, his ideas for The Doctor (a tough sea captain or a black-face pirate figure with a turban) never came to fruition. 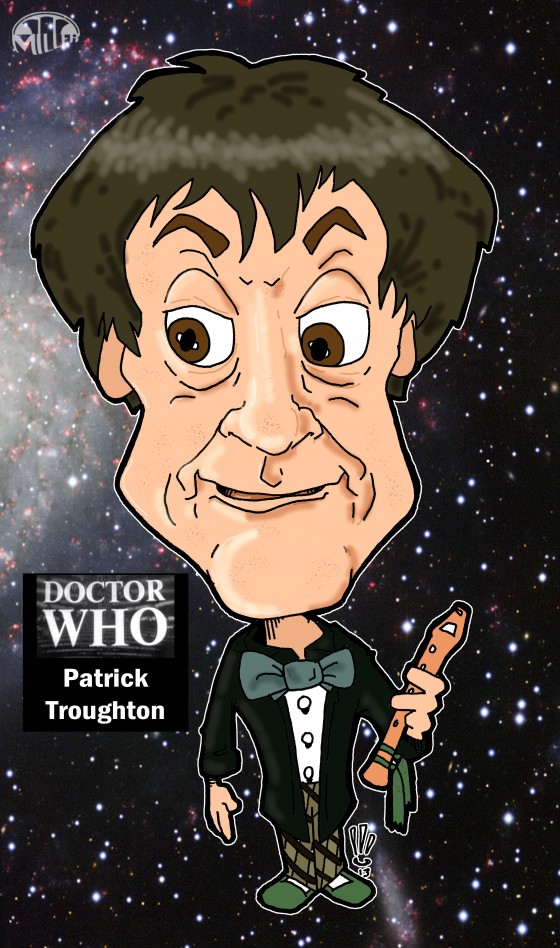 Time Traveling Trivia: Jon’s son, Sean Pertwee, has become a pretty well known actor of his own accord. In fact, two great films you may have seen him in are Event Horizon, and the fantastic werewolf movie Dog Soldiers. 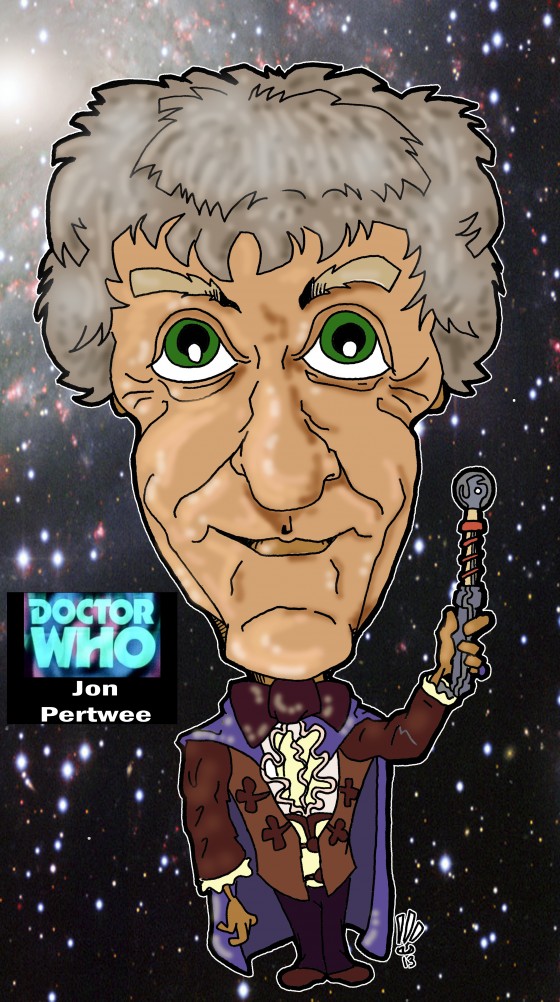 Time Traveling Trivia: This one’s my Doctor. Well, at the very least the one I remember watching first on PBS. And Baker is, and was, arguably one of the most popular. His popularity spreads to his voice as well. In fact, it’s the fourth most recognizable after the Queen, Tony Blair, and Margaret Thatcher. And in 2006, he recorded over 11,500 phrases for British Telephone for their text-to-speech service. 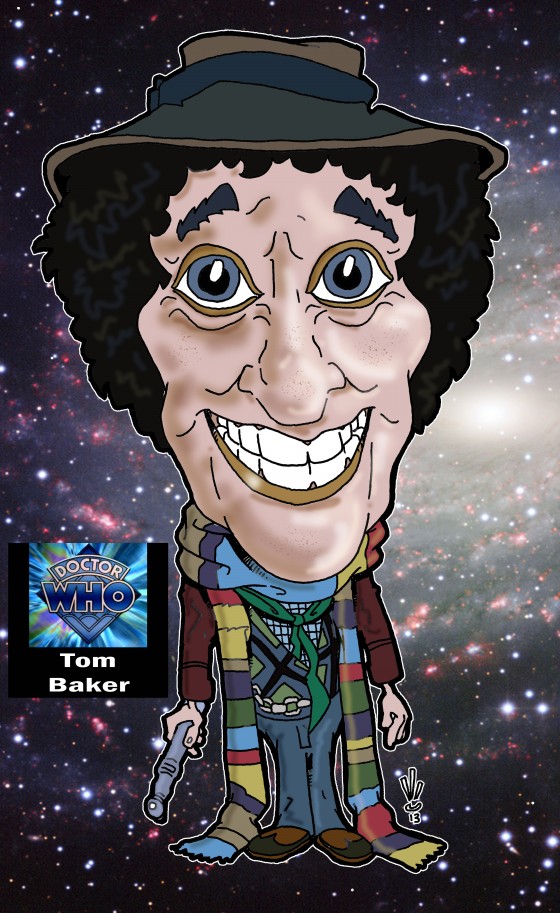 Time Traveling Trivia: In a weird bit of time and space continuum flux, Peter’s daughter from his second marriage, Georgia Moffett, is married to the 10th Doctor, David Tennant, and, weirdly, played Tennant’s child in “The Doctor’s Daughter“. Likely where they met. 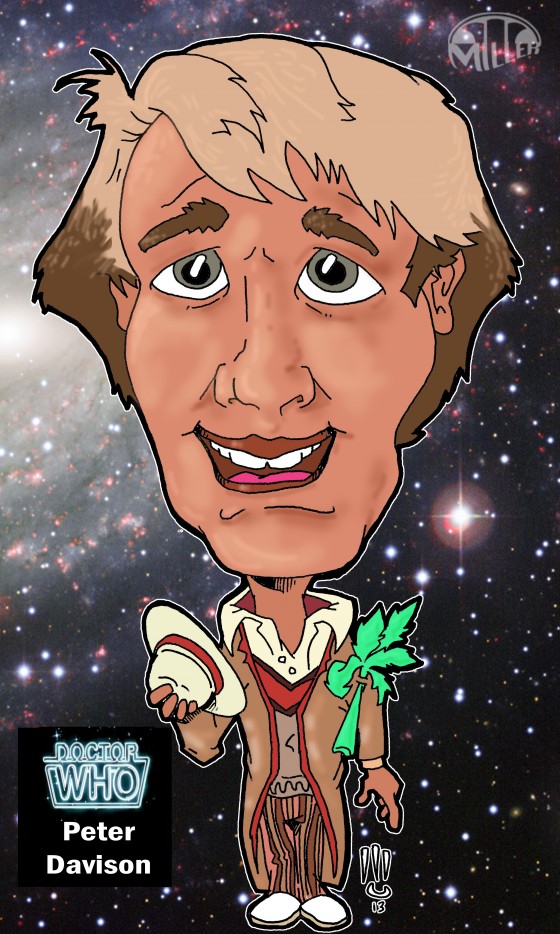 Time Traveling Trivia: How about our one and only use of quoted Wikipedia. What do ya say? – “Baker’s first appearance as the Doctor occurred at the final minutes of The Caves of Androzani, where he delivered his first few lines. The closing title sequence for episode four features Baker’s face instead of Peter Davison, and credits him as the Doctor before Davison’s own credit. This was the first (and, to date, only) time that the new lead received top billing in the final story of an outgoing Doctor.” 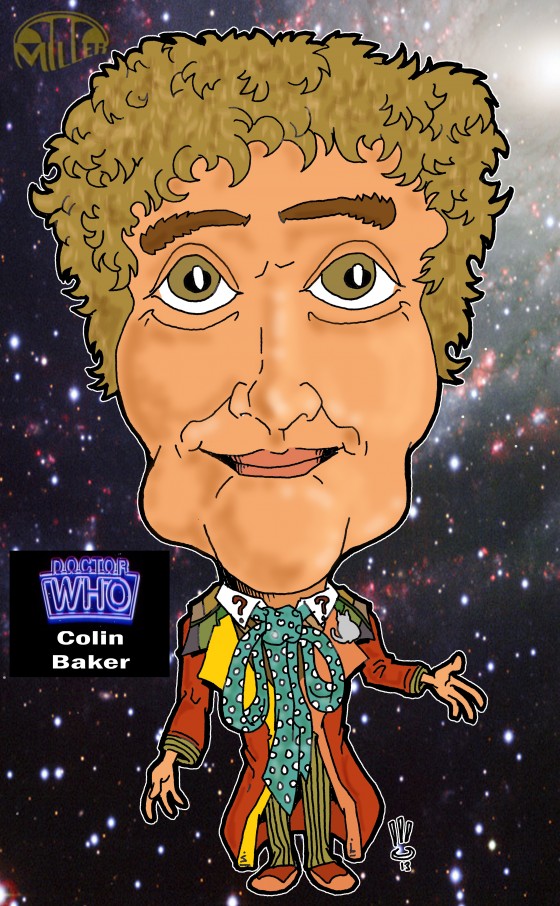 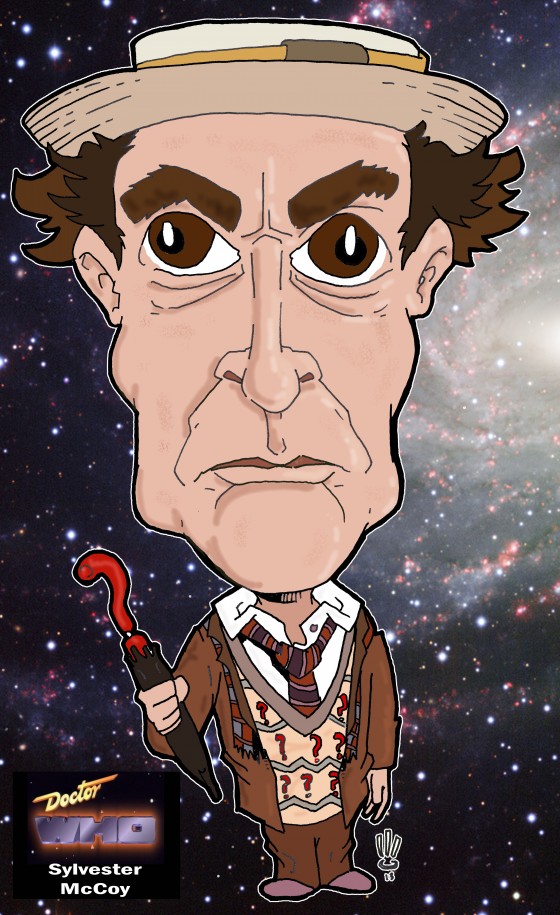 Time Traveling Trivia: Paul McGann, sadly only ever had one attempt to play The Doctor. With seemingly renewed interest in the Time Lord, the idea was to see how well the FOX-produced TV Movie fared with both the UK audience and America. Well, sadly it didn’t do very well over here, but, of course, it scored big in Britain. So in that case, it didn’t land McGann a permanent roll. 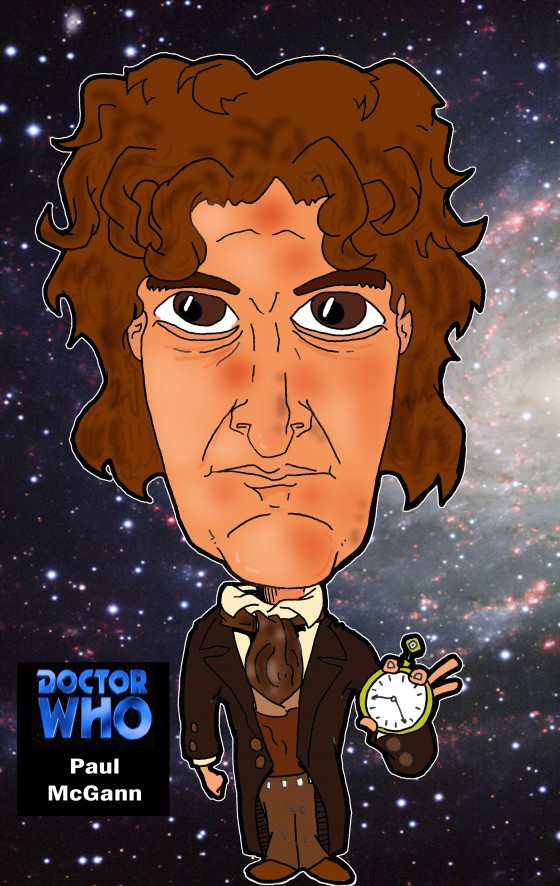 Time Traveling Trivia: Speaking of actors who only played the Doctor once… but in this case, for one season in the show’s return to TV, Eccleston can at least be known as the guy who built the resurgence. As for now, you’ll see him as Malekith the Accursed in Thor: The Dark World. 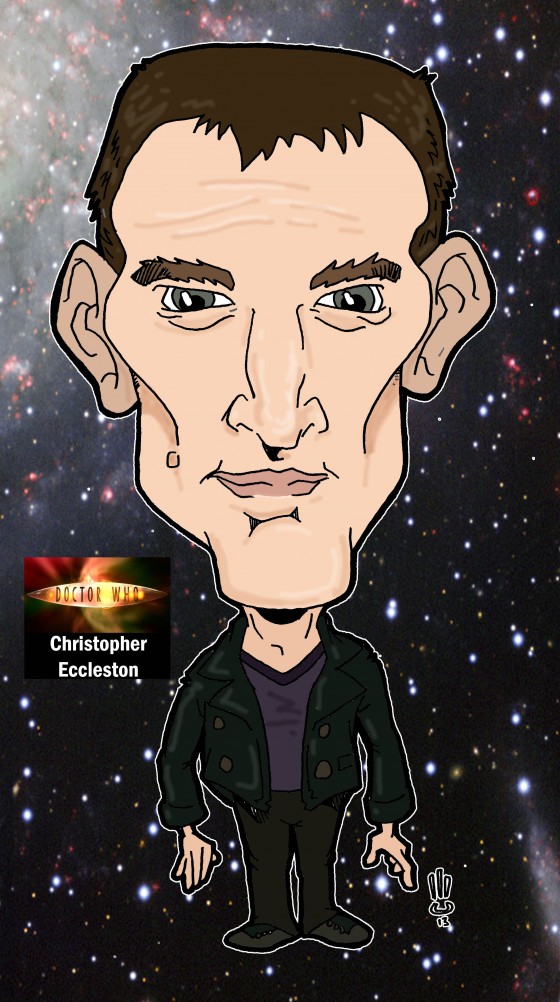 Time Traveling Trivia: Well, as favorites go, Tennant is your man. He ousted perennial favorite, Tom Baker during his tenure as the Doctor and to this day remains such, with both Baker and now Smith coming in close second and third. Also, when Tennant was to take over the roll, he originally wanted to do it in his native Scottish accent, but later it was decided, for continuity’s sake, he’d use Estuary English instead. 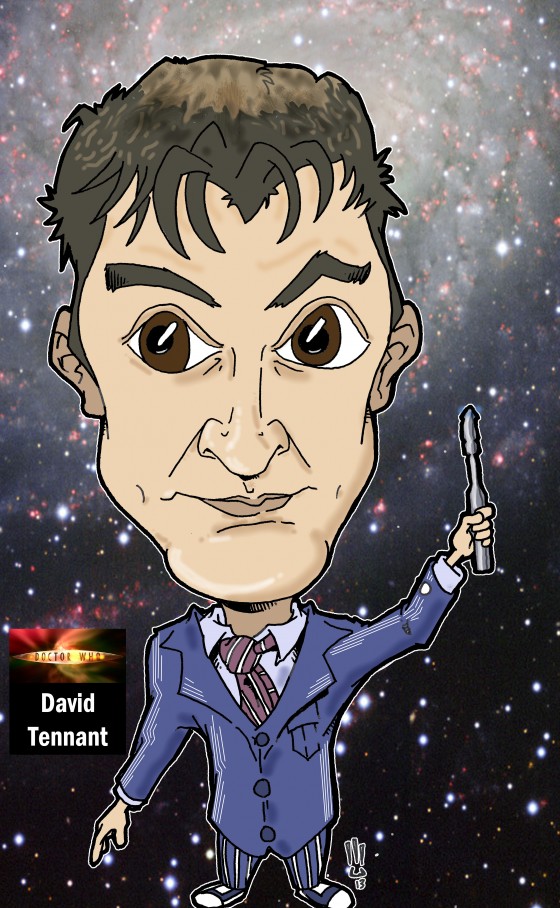 Time Traveling Trivia: As the youngest actor ever cast to play The Doctor, Matt Smith had to battle some serious worry by the show’s creative team because they all believed that, as a 26-year old, he performed the roll more akin to Sherlock Holmes. As it turned out, that little bit of calculated snoopery played well and he has since become one of the most popular Doctors. 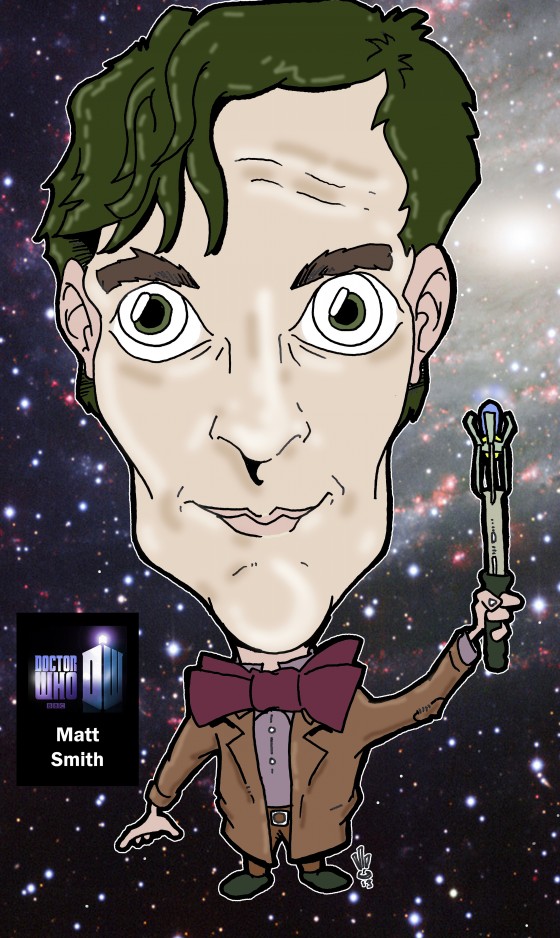