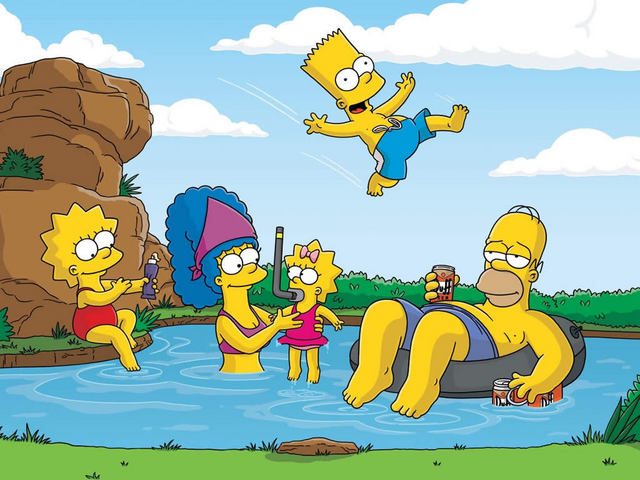 Let’s suspend disbelief for a few minutes while we traverse together down this vast and ever-widening road, and assume for now that I am a little cartoon orphan in search of the perfect dad. Now I am out there feverishly looking for some big fella to take me in, to nurture me in the ways of cartoon manhood, and to raise me as his very own… which doesn’t, necessarily, mean that this particular animated father need a wife to, in turn, become my mother. Oh sure, that is always a plus, but let’s face it: more often than not, drawn moms seem to be either fiercely overbearing, closet psychopaths, or whores.

No, none of those ‘perks’ for this poor, haggard youth. I need a male influence who can, when I’m sleeping, toss a few Benjamins to Betty Boop is he so desires. But beyond that, it’s a boy and his pop all day long. And what about the prospect of the guy already having a brood of his own? Well, of course I’d love the perks of becoming an only child and the Richie Rich-like monetary spoiling I so obviously deserve, but, I suppose having a playmate already familiar with the old man and the ins and outs of the house for later use as potential hiding spots would come in handy.

So, as I arrive in the painted-cell world that is Cartoon Town, I really begin my hunt for the one great father-figure in this wacky insane world. Now as I search, I would like to steer clear of the most obvious choices of folks who not only are already fathers, but are also too busy to take on another kid. Such as: Peter Griffin, Fred Flintstone, George Jetson, or Stan Smith. No, I think I’d like to find a father a little less traditional.   Here’s how it would all go down:

Well, he certainly seems gentle enough. He’s often portrayed as a member of Law Enforcement, which, in and of itself is a cool idea, but ultimately only serves as a giant thumb pushing down on the one person who might just want a little freedom as he gets old enough to go out drinking with his cartoon buds: Me. He can certainly find interesting ways to eventually thwart the bad guys always stirring up a ruckus in his town, but he also spends much of the allotted thirty minutes of catch-and-arrest time on the receiving end of a beat-down. No, I think this Hound Dog is just a little to passive for me.

Fred solves problems. Fred is a big hit with the ladies. Especially the two main types in his world: swooning and air-headed fire-crotches, and painfully brainy know-it-all closet porn stars. Now this is great, since he’s married to neither and typically only hangs out with them when a mystery needs solving. On top of that, he partners with a kick-ass dog who is so smart he might as well be human (and a father, for that matter – though his rearing of the bastard Scrappy leaves a lot to be desired), as well as a pot smokin’ mess who could easily score me a dime now and again. Ya know, on second thought, I would likely end up right back where I am now with the good-intentioned Fred as my dad. Yeah, I don’t see that ending particularly well. For me.

Yes, it’s true that I am human and my dad of choice in this description is an anthropomorphic rabbit, I don’t really see that as a problem. Bugs is a weasel at heart and could very easily, with a modicum of effort, spring us from any lame trap we find ourselves in whether deftly set by that Jack of all things ridiculous, Pete Puma, or the ever conniving and far-too-smart-for-his-own-good, Wile E. Coyote. Even during the times when Bugs is actually in a situation where the outcome looks bleak, a quick turn around of the would-be-killer’s words, and BAM, he’s out with nary a scratch. But that, unfortunately, is the whole problem. Even when Bugs had the opportunity to handle a baby -be them bunny or boy- he managed to get them in some really unsafe spots. No, as much fun as Bugs would be for a father, I’d feel far too vulnerable.

Donald has quite the familial lineage that actually begins and ends with his Uncle Scrooge, perhaps one of the richest cartoon characters of all time. This bides well for me, as befriending Donald almost to a fault would certainly get me into one of those Duck Tales adventures featuring Scrooge and Donald’s own nephews, Huey, Dewey, and Louie. Now that would be fun! But you know what, the one duck I’d choose as my father wouldn’t even be around to share it. And then there’s the little problem of Big D.’s anger management issues. From his early days blowing up over Chip and Dale messing around in his trees, to his current job in the Mickey Mouse Club House, Donald will throw down at the drop of a hat. Most often, his own. No, I really don’t need a psychopathic, ultra-aggressive, quickly frazzled water fowl teaching me right from wrong. I will really miss those money bins, though.

First of all, this marks the first father I’ve chosen who does have a child and is actively married to, quite possibly, the hottest female cartoon character (with a mind of her own) of all time – despite what some folks might lead you to believe. To have Betty as my mom, to showcase off to my school chums and to accidentally catch coming out of the elephant shower would more than make up for Barney’s inherent ineptitude as a man, let alone a dad. Betty, sidling in from the hot, steamy neanderthal afternoon with that mammoth fur just sticking to her every curve… no, no I am not in this for MILFs. Barney, however fun loving and sickeningly jovial, would really make a poor choice for a father. He’s rarely home, he lets Fred push him around and likely takes it out on poor, sweet, hot little Betty, and their damn kid is a brute with a massive club. Moving on.

Boy, having been a father to three ageless children for twenty years is some feat. Yes, though Homer is a generally lazy, beer-swilling, foul-mouthed funny fat guy, he truly does love his kids and, when he forgets just how much, Marge is right there to edge him in the right direction. Marge herself, a Super-Mom almost to a fault, has apparently lost the ability to visually discern Homer for what he really is and chooses instead to see the forest for the trees. For the most part Lisa and Maggie have turned out okay, and that’s largely due to Marge’s influence. Bart, well, he’d make for the best playmate of all time! But alas, Homer is already so busy juggling the job he occasionally attends, the children he sometimes raises, and the wife he frequently forgets, that another child would be utterly impossible and likely his ultimate demise. Bad idea.

Being a rather large fellow like I am (even as a kid), what could be more perfect that a big, round, jovial dude who is just about the most all “round” nicest guy in town. I’d be willing to wager that he’d have no problem whipping some fine, down-home tasty Southern grub… goodness knows he was raised on it. I guess I could see him not exactly excelling at sports, what with his sheer immensity, and slow, methodical run that most likely renders him out of breath for the better part of the day. Yeah, and I suppose the whole, ‘hanging out in a junk yard’ thing, though really cool, would more than likely lead to some kind of Tetanus-related injury or death by hiding in refrigerator. So, despite his happy-go-lucky appearance, Albert is not the best father figure around.

Certainly unmarried, a loner by accident more than by choice, and strangely verbal with a cat he couldn’t possibly understand, John is desperate, clingy, and as needy as you please. Obviously the most perfect choice for a future father. On the flip-side, those very traits that make him innocent almost to the point of being juvenile are ultimately his downfall. Being raised by John Arbuckle would be much akin to being raised by a smothering little girl to her dolls: he’d kill you with kindness, dress you like Little Lord Fauntleroy, and basically treat you in the exact way his cat, Garfield, would never knowingly allow. No, for a guy who can barely handle a cat and a moronic dog, John would make for a pretty creepy dad.

I guess the sign of a good father is having a slew of children who not only respect and adore you (even though you are a communist), but also pretty much do whatever you tell them up to and including risking their own lives. Oh, and did I mention he has over a hundred kids? Yep, and each and every one is named, every so conveniently, after what he just happens to be good at: Jokey, Vanity, Brainy… and the rest. I suppose the only real issue would be the soul matriarchal figure in the village would more than likely snatch you up as her very own and raise you much in the same way she brought up Baby Smurf. So named because he was, for a good long time, a baby. Also there’s the quite apparent situation of living in a tiny mushroom town. So, yeah… Papa Smurf, he’s busy enough.

Brian is only a dog in physicality. In spirit and in intelligence, he is all human. Yes, Brian is an alcoholic, but he isn’t at all violent, so that can be ignored. He is fiercely loyal to his best friend, Peter, even at the expense of his hidden love for his wife, Lois. He is a good friend to Peter’s older kids, Chris and Meg, and has often helped them out of uncomfortable (for him) situations. And finally, Stewie, the Griffin’s youngest and most definitely Brian’s biggest nemesis, yet most trusted confidant. They’re either at each other to the point of blows, or else singing their way out of another country. But as a father, Brian not only seems the most well suited to teach me in the ways of the world, but also the best choice for his innate ability to really love and care. Also he can mix a mean Martini. Yep, Brian can be my dad.