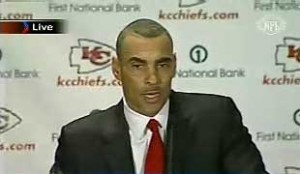 With Herm Edwards joining the list of fired NFL coaches this season, I can’t help but wonder how long it will be before he and the others are featured in Coors Light Commercials. There have been so many coaches fired this off season, that we imagine Coors Light will have plenty of material to choose from. So while we aren’t skilled enough to make videos here at Gunaxin, we can search on Youtube just as good as the next guy. So we have collected a couple of videos that explore the future of Coors Light Commercials. Edwards especially is ripe to be featured, following this famous press conference from 2002.

In fact, lame people on YouTube have already made an attempt :

Jon Gruden is another coach who has found himself jobless, here is a take on his Coors Light Commercial:

I wasn’t able to find too much more to expand on this concept, but of course there is the Mike Shanahan booger video:

here is another video of Shanahan, on being fired:

A couple of big name coaches have also retired this season, like Mike Holmgren :

as long as we’re on the topic, here is the Mora commercial:

and I’ll leave you with the classic, in honor of the Cardinals trip to the Super Bowl: