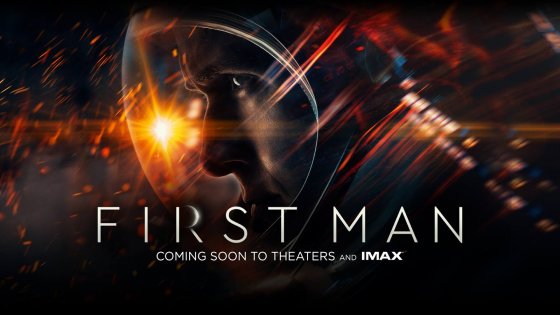 The scene which defines First Man finds Neil Armstrong (Ryan Gosling) being forced to stop tuning his family out and talk to them – his wife Janet (Claire Foy), and his two surviving children Rick (Luke Winters) and Mark (Connor Blodgett) – about his upcoming mission to the moon. Up to this point, he’s been packing a suit and filing papers into his briefcase, intentionally pushing his family out of his mind, focusing on what needs to be done. Also, he’s dealing with the eventuality that he might never see them again, something he’s already had to face in the film’s opening scenes, which depicts the agonizing treatment and resulting death of his 2-year-old daughter Karen (Lucy Stafford) from a brain tumor.

Some would call this “being a man”; others would say Gosling is playing Neil Armstrong as an emotionless robot. But imagine: the Space Race is riding on Neil’s shoulders. His beloved daughter is dead, and he couldn’t do anything about it, not even with his engineering smarts and vast brain power. Friends of his in the NASA program are dead due to something as complex as faulty equipment, or something as simple as unexpected weather conditions. And America is expecting him to do the impossible.

Yet he holds his family – the people closest to his heart – at arm’s length as he waits for the car to take him to Cape Kennedy, Florida to suit up for the Apollo 11 lunar mission. Is it to mentally disavow them to clear his mind for his objective? Or is it to project a strength they’ll need in case he doesn’t make it back? Gosling strains to keep his emotion and all the things Neil wishes he could say to his family from spilling out, but his eyes betray his real feelings – he’s just as scared as they are. But he keeps his cool and goes on his way with his family knowing the truth; the older Armstrong son, Eric, even goes one step further and shakes his hand instead of hugging him, acknowledging the role he might have to play if things go south.

Director Damien Chazelle’s First Man may be a movie about Neil Armstrong and the Space Race. But it triumphs more as a film about the American ideal and the dedication towards making it a reality, demonstrating the true meaning of patriotism without being jingoistic or chest-thumping. First Man shows what we can do with the ability to pull on the rope as one and elevate ourselves both figuratively and literally. America is more than her flag; it’s her values and what her people do with those values, which First Man turbulently deals with in its 8-year, 143-minute expanse. 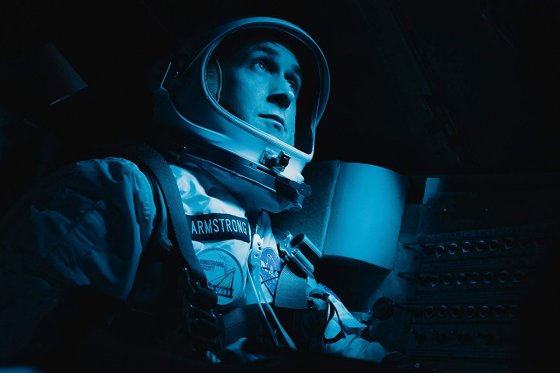 Since Neil is our guide through this film, much gets told through intimation and implication, leaving us only to consider his reaction and the ramifications of each revelation. Karen’s death is only shown from the progression of her disease to her coffin suddenly being lowered into her grave. Personnel shifts and accidents are only told to him in the simplest of terms without us witnessing the majority of what’s happening to his fellow pilots. One such incident is quickly set up and executed, only to cut to a haunting, lasting image, with our brains scurrying to fill in the frightening aftermath.

It’s a whirlwind of a film, with Linus Sandgren’s discombobulating handheld camerawork amplifying the confusion and agitation surrounding the Armstrong family. There’s no The Right Stuff-esque smoothness and glamor about any of what happens to Neil, his co-pilots, and their families. Sandgren’s frames are slightly fuzzy and washed-out, giving First Man an old-time, newsreel-ish feel which enhances the film’s immediacy. Chazelle seats us directly as participants in the rigorous training program for the Gemini and Apollo missions, introducing us to a bevy of historical figures; however, most of them are treated as ancillary characters, germane to Neil’s task but never rising above introductory levels. 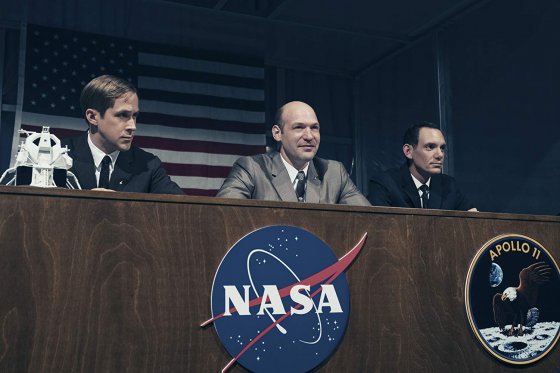 Of course, they’re not meant to be much more than ancillary; their treatment cements the job’s dangers of non-permanence. It’s a danger which hangs over Neil’s mind like the Sword of Damocles, knowing full well at any instance he can be swiftly taken from his family. While Neil is swept along by the Gemini and Apollo programs, Janet is left to handle their two sons and listen to her husband’s spaceflight activity on a speaker wired directly to NASA. But we see both of them trying to do for the other, which leads into the theme of sacrifice which powers First Man.

Claire Foy cuts us to the heart with her impassioned performance as Neil’s beleaguered wife, juggling just as much personally as he does professionally. Janet has to contend with raising two boys with Neil away, the unthinkable suspense of whether or not she’ll see him come back after a day at the office, and the many funerals this era of NASA spawned among their friends. Foy is a marvelous co-anchor for this film, sharing the emotional load with Ryan Gosling, who’s scripted to avoid emotion most of the time. Yet it is not borne of coolness-for-coolness’ sake; Gosling gives Neil a more analytical outlook which tempers his emotions, lest he make a critical error either in his personal or professional lives. 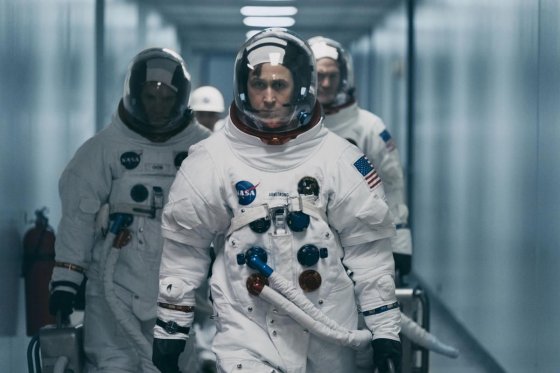 First Man also involves the social unrest of the times; our journey into Vietnam is touched upon in news footage, Gil Scott-Heron’s “Whitey On The Moon” is heard in a protest scene, and the insecurities of a country not knowing why NASA is doing all of this are exposed. Yet to succeed, everyone has to throw in their lot, risks and consequences be damned. Not since Steven Spielberg’s Saving Private Ryan twenty years ago has a film so greatly espoused the spirit of what it truly means to be an American, and Damien Chazelle has recovered that feeling with First Man. Both are films about sacrificing everything for something greater than oneself, to achieve the impossible in the face of certain death, and to show the greatness of the American spirit despite insurmountable odds. 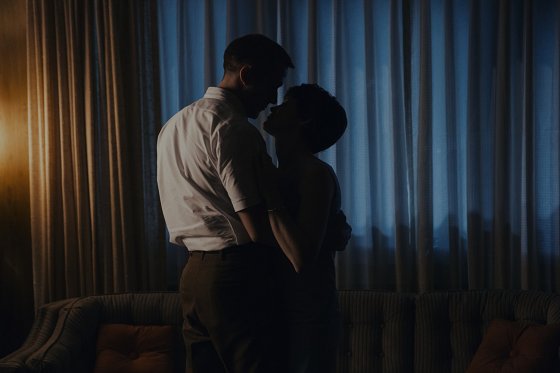 It’s a notion which seems to be lost on us these days, with everyone out to get theirs and theirs alone. But Josh Singer’s script – based on Armstrong’s official biography by James R. Hansen – repeatedly brings up the price each person has to pay for turning America into innovators. There is no success without devastating loss, no joy without sorrow. Even as the film does something similar to what Miracle did for the 1980 US Men’s Hockey Team – blending archive audio into newly-shot footage for added realism – we’re hit with the twangs of what Neil and his family have lost along the way.

Chazelle loses all of the sparkle and luster of his previous film La La Land, dropping us straight into this significant chapter in scientific and American history. Sound is near-constant throughout the film – ringing phones, procedural chatter, Justin Hurwitz’s jazz-classical score, and a multitude of rocket sound effects – until the big moment. Chazelle takes the opportunity to blast us with the silence of space, leaving his subjects (and the audience) to truly ponder where they are and what they’ve done. In doing so, the culmination of the film’s delight, terror, and sheer awe leaves us reeling, lending a new perspective to 49-year-old events, making us appreciate looking up and aiming for the stars.

First Man may be a movie about Neil Armstrong and the Space Race, but it triumphs more as a film about the American ideal and the dedication towards making it a reality.