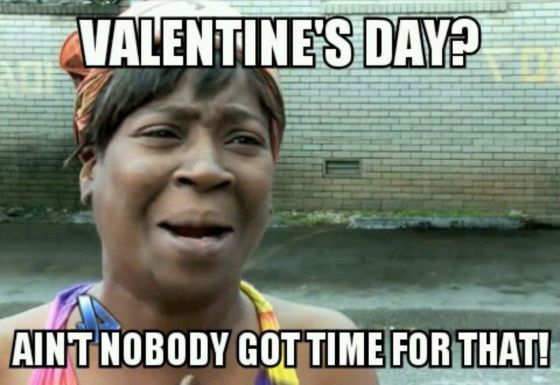 Yeah, five things ONLY? Am I right? Look, Valentine’s Day has become (long ago) a full-on Hallmark Holiday. There really is no other reason to celebrate the following (From Wikipedia):

Though popular modern sources link unspecified Greco-Roman February holidays alleged to be devoted to fertility and love to St Valentine’s Day, Professor Jack Oruch of the University of Kansas argued that prior to Chaucer, no links between the Saints named Valentinus and romantic love existed. Earlier links as described above were focused on sacrifice rather than romantic love. In the ancient Athenian calendar the period between mid-January and mid-February was the month of Gamelion, dedicated to the sacred marriage of Zeus and Hera.

See? So this bullshit was destined for assumption Heaven from the get go. It takes very little prodding for the card companies to jump headlong into a pointless holiday, and as long as they can glean profits from it, all the better. So here we have five super irritating things you can expect (especially if you’re a dude) this Valentine’s Day. Be prepared, fellas. 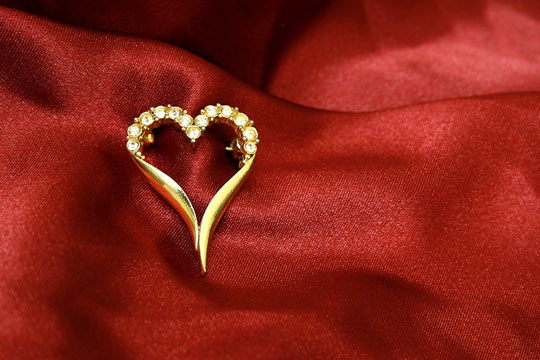 Some jewelry stores take souls in on trade! Yay!

Okay, here it is: you either love your woman or you don’t. Purchasing a piece of Walmart bling for the lady just because it happens to be a ‘lovers holiday’ does not change that fact the other 364 days of the year, got it?

This is made all the worse when, for some reason, the guy decides to go even further and splurge on a real rock or necklace costing roughly the same as a small Pacific island just to basically say, “Baby, every other day I merely tolerate your existence… but since it’s Valentine’s Day, I have decided not to put my cigarette out on your cheek and instead go completely nucking futs on this ridiculous piece of hand candy. Yeah, I love you… today.”

Unfortunately, the worst part of all is that many women have come to expect this because they, too, know that some love is only skin deep. And they don’t care. Sad really. 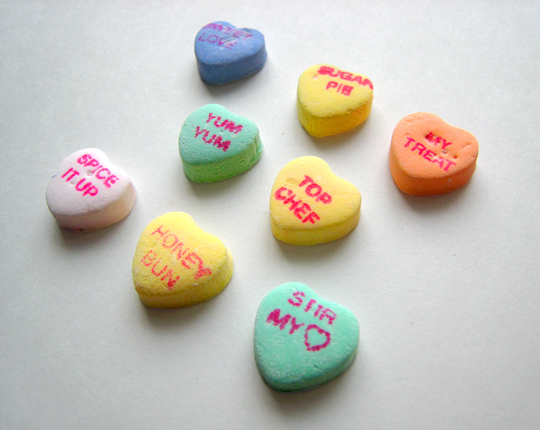 Top Chef? Why, cuz you’re cookin’ up some love? Ugh…

If you are going to get the lady love some candy (since she’s evidently not fat enough – Zing!), at least get her a nice cellophane-wrapped gift box of assorted chocolates and various cordials. Do not get a tiny box of chalky hearts with cutesy quips emblazoned on them. These are for Kindergarten classes and whipping at your friends at Valentine’s parties at school.

Somehow there’s just a little more class and thoughtfulness in the purchase of a heart-shaped box full of hand-crafted and select confectioner’s chocolates. A bunch of Necco-style candy buttons saying, “Be Mine”, not so much. Conversely, if you give her too much candy, she’s apt to assume you either think she’s already a bloated eat monster, or looks like she ought to be one. Be careful, that road’s treacherous. 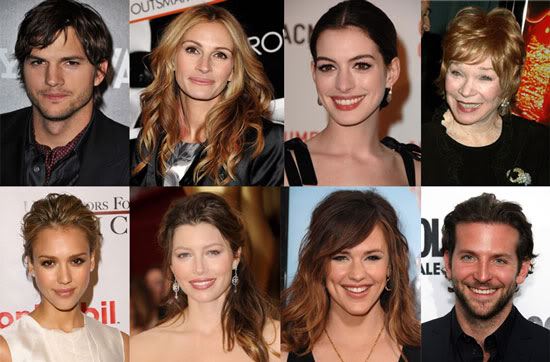 There’s a collection of vomit-inducing ‘talent’ for ya.

It never fails and it comes around just like clockwork: the Sappy-Ass Valentine movie. In 2010, the love-gushing, sentimentality-hemorrhaging flick just so happened to actually be called, Valentine’s Day. Sweet Jebus, what a train wreck. But, there’s little doubt that your woman is going to get all puckered up with percolating love glee and present you with two options: you either watch Valentine’s Day on friggin’ Valentine’s Day, or, option B, she withholds sex until the next presidential administration. So, as it stands, your ass is watching this movie.

Oh, and to stoke the embers of loathing even more, it’s got all of the following fucktards in it: Julia Roberts, Ashton Kutcher, Shirley MacLaine, Taylor Lautner, and Queen Latifah among several others. I suggest immediate and complete suicide. 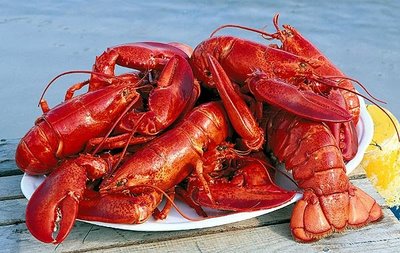 And what’re you gonna eat?

If you haven’t already put all of your earthly possessions in hock, now might be the time to do it along with renting out several of your favorite organs and a few liters of plasma because son, you are gonna need some cash. The lady in your life is so not going to eat at Pizza Hut on Valentine’s Day lest she backs over your dumped ass with the car while you bring out the pies and bread sticks.

Oh no, your woman wants a several-course, bottle-of-wine, extra-dessert, Valet-Parked, suit-and-dress restaurant complete with a dozen roses and a personal masseuse. After all, dumb ass, it is Valentine’s Day and, as I stated before, if you haven’t showered her with oodles of love over the rest of the year, you had better shine with a seriously ass-kicking meal right now or you’re gonna wake up in some stranger’s driveway with a far more pipe-raped bung hole. 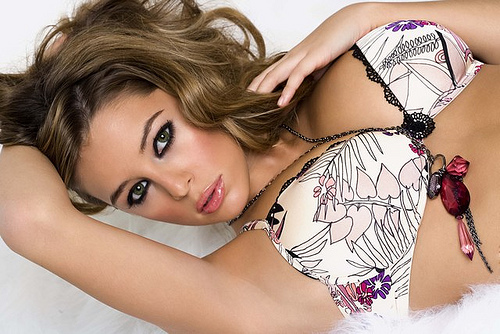 “Why are you not three-fingers deep yet, sailor?”

For some bizarre reason, Valentine’s Day brings out the wild, feral, berserk animal in women. This fact can be made even more pronounced by giving her any and all of the last four items on this list.

So, as the evening’s winding down and you’re driving home stuffed to the gills with bland wine, stale chocolates, and cheap sea food from Red Lobster, your woman gets a little sly and begins to give you a palm rub through your Chinos. Oh, it’s on now. You turn down the road to your house when, suddenly, the amorous feelings get a little more pronounced and most of the lady’s clothing has been chucked out the open sun-roof. She, with the lithe and cat-like agility of a stalking panther, slings her leg over your shoulder and begs you to ‘give the man in the boat a nasty tongue-lashing’ as she buries her high-heel into your jugular vein. You try to steer past the delicious furred burger you suddenly seem to be devouring at a starving man’s pace, narrowly avoid a stop sign, Tokyo Drift into your driveway, burst from the suddenly steaming car, lunge for the front door (all without breaking suction, mind you), leave a telltale trail of sloughed clothing in your wake, and proceed to fill more holes and make-shift crevasses than you’ve ever though possible while emptying progressively smaller gobs of gentleman’s geysers from one corner of the room to the other.

And then you realize, at about 4 a.m., after toweling off with a sock, that you’ve left your date at the restaurant. Oops. Oh well, happy Valentine’s Day!