Five Board Games Ready to Make it as Ridiculous Movie Premises 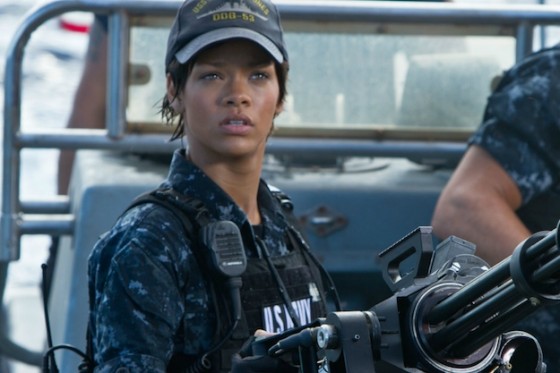 Just in case you’ve missed the abundant ads permeating the air waves lately, the board-game-turned-feature film, Battleship is almost in theaters. That’s right, if your summer movie season isn’t going to get its eyes fucked out by The Avengers, but instead by the ill-advised and impressively asinine Battleship starring Liam Neeson and Rhianna… well not only is your wait nearly over, but also you are an idiot. But because I’m a questionable journalist at best and a sucker for embedded videos… here’s a taste.

I love how it freely admits right up front: “From Hasbro. The Company That Brought You TRANSFORMERS.” I’m honestly not convinced that’s something they want to be bragging about. It might as well have said: “From Hasbro: The Company That Continues To Rape Your Childhood And Spits On The Classics.” Nowhere in the preview does this not immediately look like Boats Vs. Beyblades. Yeah, I have kids… I know Beyblades. Also how is this even remotely Battleship? Other than sea vessels, I have no idea. At least when Clue did it years ago they got the basic premise right. Plus, they had Tim Curry.

So what games are next in line to be cinematically shat upon? I have no idea, but I can venture a guess.

Contrived Plot Devise: Kevin Spacey plays morose retired police detective Marcus Piewheel, who just can't let an age-old case die. Fifteen years ago serial murderer Jackson Hawthorne left a trail of bodies in his wake, each marked with a memento of a small, colored triangle and a strip of paper with a vague, trivial clue leading investigators to another crime scene. Hawthorne was never caught because the last clue left in 1997 confused everyone and stumped even the most seasoned of quiz-question veterans.

Left with a yellow piece of triangular plastic, Piewheel retired and has been clinging to the cold case ever since. But it looks like Hawthorne might be back as new victims pile up and new bits of trivia arise. Enter Lieutenant Chase Quest, played by Zoe Saldana. She's a whip-crack, rules-be-damned, hard-assed cop who'll do whatever it takes to get to the bottom of the problem, and she's heard all about Hawthorne... but she might just need assistance from Marcus Piewheel to bring the Trivial Pursuit to a head. 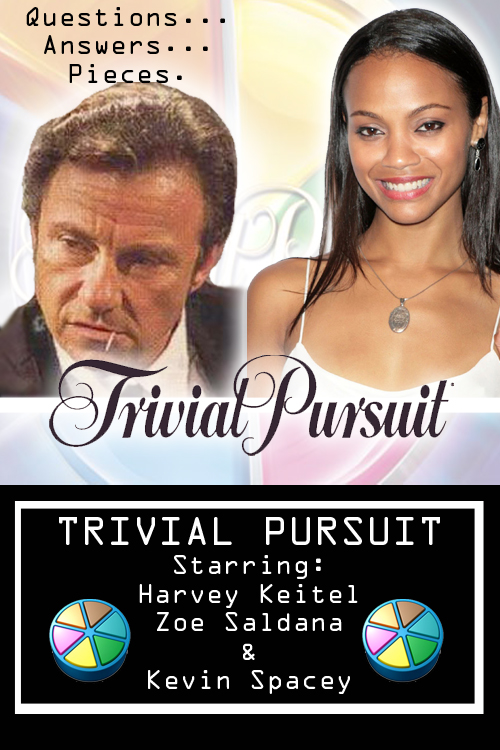 Contrived Plot Devise: Somewhere, beneath a regular neighborhood in suburban Tallahassee. An evil is stirring. As darkness falls, sounds can be heard -- skittering, gibbering... chattering, coming from beneath the streets of a picturesque village in Florida's capital. When two unassuming tweens walk home from a school party, young Sara Legwand (Selena Gomez) stumbles across what looks like a giant insect antenna. Her BFF, Gina Armstrong (Dakota Fanning), is dumbfounded and they decide to hide the evidence and tell no one.

But all too soon more and more shed insectoid limbs and parts begin turning up all over town. Only renowned entomologist, Dr. Vance Goodbody (James Brolin), has any clue as to what's happening. He knows the deadly secret of the subterranean bugs called Cooties. Enlisting the aid of bug-catcher Garth Moorehead, (Kurt Russell), the girls and Dr. Goodbody must assemble the pieces and defeat the creepy, crawly menace. 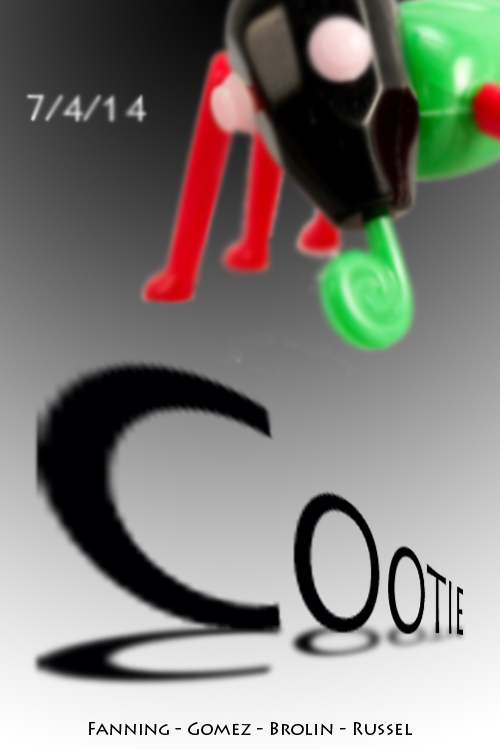 Contrived Plot Devise: Jason Bateman as Donald Shutsen and his brother Sid (Tim Allen) own the local ladder supply company called Shutsen Ladders. A new high-rise tower is going up in Tokyo and it's set to be the tallest building on earth. But the designers need a company they can trust to meet the deadline!

Luckily, Aziz Ansari as Amir Smoot and his partner Big Jimmy McLean know the Shutsen brothers from their home town in upstate New York, and even though they know them as the best ladder boys in the biz, they'll do all they can to get the job themselves. Julie Andrews stars as Cindy Yakatori, wife to the famed Alvin Yakatori and the money behind the new tower. But who will she choose to make the dream come true? Hilarity is in the plans as Chutes and Ladders raises the silly stakes! 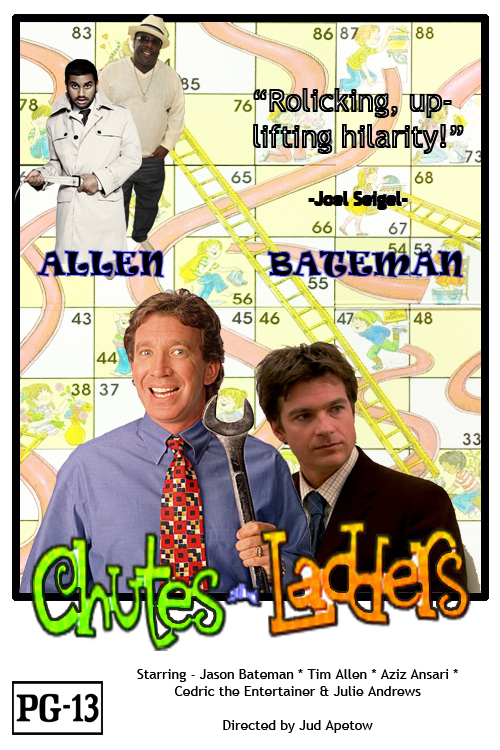 Contrived Plot Devise: Atlanta General Hospital is overrun with cases: stabbings, gun shots, heart attacks, surgeries... and an android named B.O.B. (Brilliantly Operational Bot) played by George Clooney. No one's sure where he came from and his memory chip is damaged as well as the remaining human half of his brain. The chief of surgery, Chloë Sevigny as Dr. Leanna Heart, is stumped as she hovers over the open torso of B.O.B. examining his myriad colorful and robotic organs intermixed with the remains of his once-human parts.

But he cajoles and jokes even as she deftly pokes and prods attempting to restart the android's mind. Luckily Terrence Stamp as med student Tony Butterfly has seen this model of android before in the governmental med school he attended and he's here to lend a hand. All under the watchful eye of Naval liaison, Commander Trina Basket. Will the operation be a success? Follow the dramatic comedy in 2013! 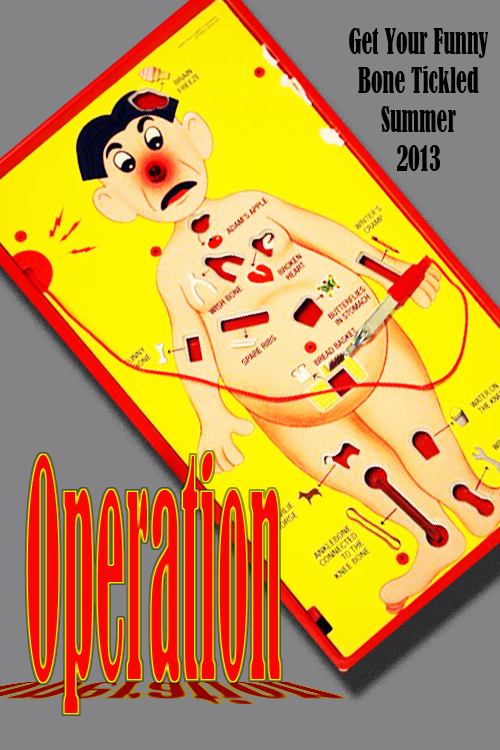 Contrived Plot Devise: The Christmas season is here and 2013's most popular toy isn't a toy at all... but a hat! That's right, a hat that can be used as an MP3 player, a book reader, and a portable GPS! They're all the rage and they come in four colors: Red, Yellow, Blue and Green, and they look a bit like Smurf hats

Father of five, Aaron Pawn, thinks they are completely ridiculous. But his oldest son, Parker, is dying for one, so Aaron has no choice but to find the Safety Zone Hat at the only store still stocked with them: Granny's Shoppe, run by the ornery and cantankerous Granny (Betty White). Aaron gathers his best friend, Barry "Start" Startz (Steve Coogan) and plans the biggest infiltration and heist of all time just to get the toy his kid wants. But he better steer clear of Officer Haz Brody (Al Pacino) who's hot on his trail. Sorry! It'll be 1,2,3, hilarity in '14! 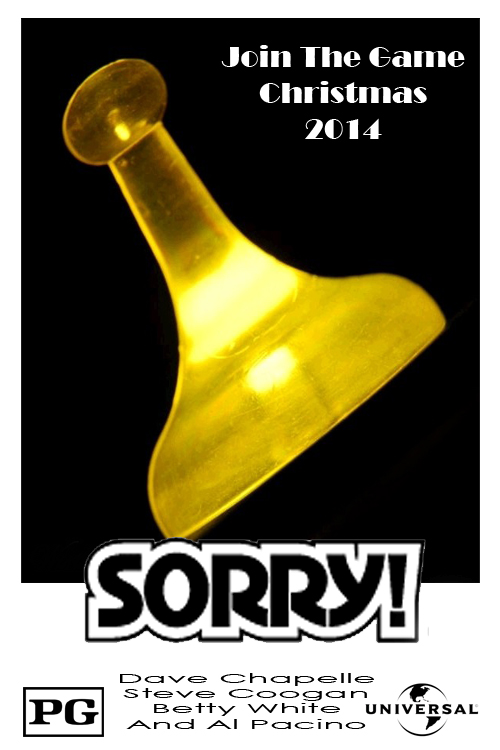