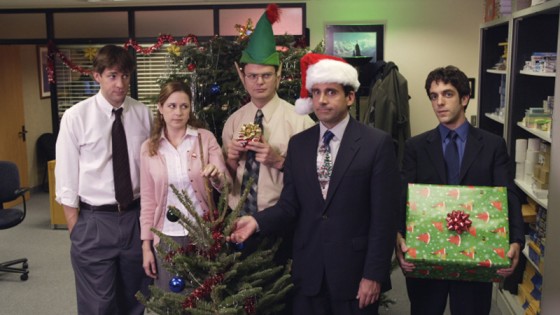 The Holidays are filled with awkward parties where you are forced to speak with people you normally wouldn’t. At every gathering, there is bound to be at least one of them, the Conversation Killers. Michael Scott is our favorite conversation killer, but he is one of a growing breed…

These are the voyages of the Conversation Stoppers. Their mission? To explore strange new levels of awkwardness, to seek out cringe-worthy statements and questions, to boldly stop functional conversation like it has never been stopped before. Let’s take a look at five phrases guaranteed to kill a conversation :

Did you try the mayo-filled crumpets?

Alternatively, enter some other appalling thing the speaker wants you to try. Unless you are extraordinarily creative, this can only end in five awful ways:

Just because you said you like Taylor Swift does not mean people think you enjoy butt gymnastics. This never works because it always makes you sound like a massive dick ready to spurt more dick comments. It is about as convincing as “my dog ate my homework.” It only makes you sound like you’ve been looking for hidden treasure in that guy over there in the skinny jeans. Additionally, you can be safe in the knowledge you’ve made gay people’s lifestyle sound like the seasonal flu, douchebag.

We all know “interesting” is an anti-word. Unlike in writing, when spoken out loud, it never means what it’s supposed to. This has been accepted as the law of conversation since Egyptians worshiped cats. Even good ol’ Jesus was probably tempted to dint his perfection in the midst of hearing another Pharisee tirade about how mixing cotton with flax would lead to eternal damnation with an, “Oh, that’s interesting.”

And yet, people still say it. There must be some demon who delights in stopping conversations, and possesses people temporarily just for this purpose.

“Good gravy! Everyone take cover, the impact will blow this conversation into smithereens!”

Seriously, the only thing that ever comes out of a seemingly well-meaning lead like that is something like Uncle Dickenspiel’s shockingly racist rant about “chocolate warriors.” It almost makes you want to face the incoming comment directly and shout, “You shall not pass!”

When somebody literally says the letters “O,” “M,” and “G” or some other variant of internet abbreviation, images instantly come to mind of a tumblr warrior with a hot Maggie Smith site. If they became friends or a lover, these sorts would reply to a repeated insistence of “Let’s go!” with, “Wait a minute! I’m in an epic confrontation with the Murder, She Wrote fandom!”