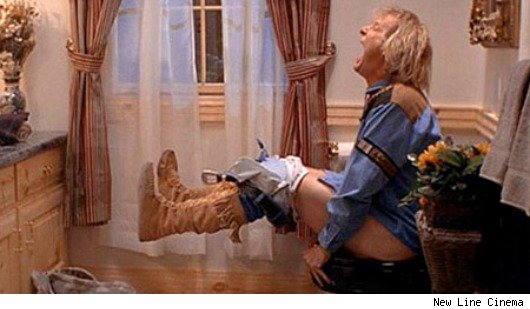 While producers and screenwriters wrestle with the nuances of comedy movies, there is one ingredient that will always make a movie funny by nature and that ingredient it feces. Whether you want to call it shit, crap or just plain old-fashioned poop, turd scenes almost always guarantee a good laugh. Listed below are six fantastic popular pooping movie scenes that are sure to awaken your sense of smell and tickle your ass’s funny bone:

Ice Cube’s dad calls him into the bathroom to scold him about losing his job on his day off, while at the same time he is taking a dump. The dad pauses in-between words to pinch off loads of crap, which can be heard dropping into the water of the bowl. Parental revenge is sweet!

This is a classic rush to the bathroom before you crap your pants scene. Finch is about to unleash a torrent of diarrhea and rushes to the nearest restroom. Because he has a fear of public toilets, he frantically places toilet paper on the seat for sanitary reasons. The anticipation is classic as you watch him struggle with the process. When he is finally ready to let the river of shit flow, a group of girls enter the bathroom, which is when he discovers he is in the girl’s restroom, but that doesn’t stop him from the inevitable bowel-busting brew he lays down.

Ben Stiller is famous for playing awkward movie characters and he doesn’t disappoint in this movie. He finds himself in Jennifer Aniston’s bathroom with nothing to wipe his ass with, and ends up using her family’s antique hand towel. When the toilet doesn’t flush, he then begins to pray to the porcelain god for help. It’s very funny, because we’ve all been there.

Nothing ruins trying on wedding dresses like a nasty bout of food poisoning from a hole in the wall Brazilian steak restaurant. This scene pretty much launched Melissa McCarthy into superstardom and for good reason. Watching her pop a squat atop a sink and evacuate with extreme prejudice is worth its weight in comedy gold.

This is THE classic movie pooping scene. Lloyd (Jim Carrey) dumps a crap load of Turbo Lax into Harry’s (Jeff Daniels) tea as an act of revenge for stealing his would-be girlfriend, Mary. As soon as Harry arrives at Mary’s house, he immediately has to take a dump. Unbeknownst to Harry, the toilet ends up being out-of-order! You can watch this scene a thousand times and it never gets old.