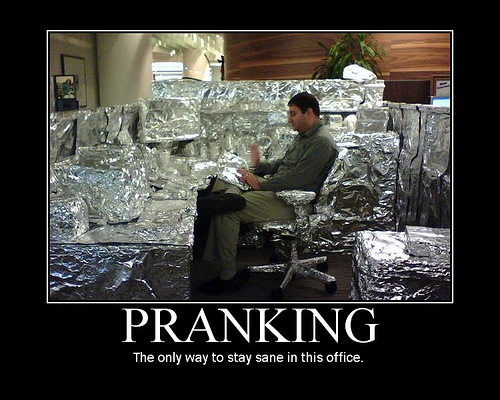 What’s funnier than pranks? Well, how about when said prank completely fails. Check out a few videos of some ridiculously poorly planned pranks and their Epic FAIL consequences.

The idea is simple: get someone to put an egg in their mouth, hit them in the jaw, and good times will ensue. All you have to do is pray that your prankee is mentally challenged, and convince them to do the prank by putting an egg in your mouth first. No way this can go wrong.

Yeah, this is Ocean’s 11 grade stuff. No wonder this observer got trigger-happy.

The best thing about this video is how the prankee goes from “average highschool student” to “Chuck Norris” in roughly half a second, and shows absolutely no hesitation in socking this dude in the face. In that half second, he is 100% sure that he just punched a top hat-wearing demon in the face. This leads us to believe that he spends his spare time hunting the undead.

The recycling lid slamming shut is also a nice touch.

We wish there were more videos where pranks ended with someone getting slugged in the face. We don’t think we’re exagerrating when we say that if you disagree with that statement, then you hate America and love cancer.

Imagine: You’re a pranker on the Belgium equivalent of Candid Camera. You’ve just threw a green net on some guy in a mall, which is hilarious over in Europe. All you need to do now is make your escape. As you flee, you approach what appears to be a buff-looking off-duty mime. This is the last thing you see before his foot has rough sex with your face.

In the mime-man’s defense, he thought the pranker had stolen something and was running away. Also, it was a pretty awesome kick to the face.