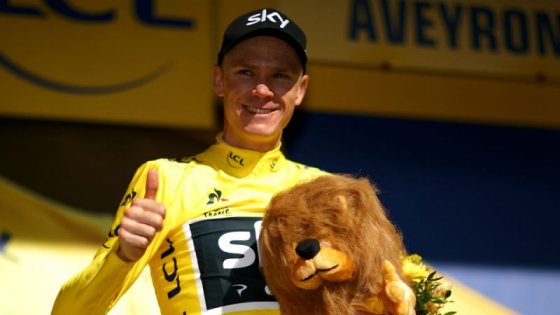 As the 106th edition of the Tour de France reaches its conclusion in Paris today, Chris Froome is sitting at home injured, and a new star of his team is set to win in just his 2nd running of the famous race. In fact, Egan Bernal is the youngest rider in this year’s race and will be the youngest rider to win the Tour de France since before WWII, and the first from Columbia. So while he is a name to keep an eye on for the future of the sport, Froome had won the Tour in 4 of the past 5 years. He hasn’t been able to win that 5th Tour which would bring him into a tie on the all-time list. Despite his 4 victories, though, Froome is not close to breaking any other tour records. In fact, he sits 27 individual stage wins behind Eddy “The Cannibal” Merckx, the all-time leader. So if Chris Froome has yet to cement himself as an all-time Tour champion, who are the top five greatest champions of the Tour de France? 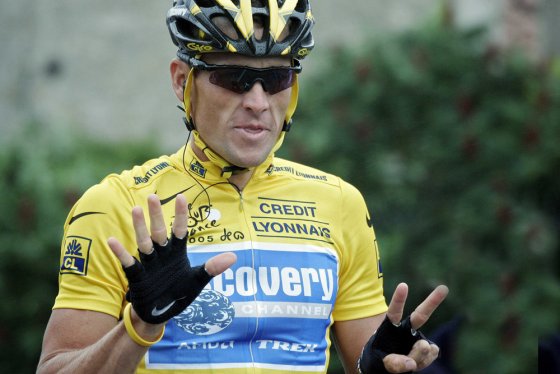 One of the most polarizing figures in all of sports, Lance Armstrong broke the record for Tour victories after winning 7 consecutive yellow jerseys between 1999 and 2005. His inspiring story of beating stage 3 testicular cancer made Armstrong the biggest name in cycling history. He even created a fashion and charity revolution by popularizing the ‘Livestrong bracelet.” After years of denying accusations of doping and performance enhancing drug use, The U.S. Anti-Doping Agency’s investigation into Armstrong left him stripped of all titles after 1998, including all of his Tour de France victories. He would admit in 2013 that he did use PEDs throughout his 7 straight championship races. Those titles were never re-assigned, as many of his top rivals were also doping during those years.

Despite the damage Armstrong caused to the sport in the long run, he did bring the Tour de France back to the forefront of the international stage and raised over $500 million dollars to help support cancer survivors. History will remember both the good and bad of Armstrong’s career, but it’s difficult for us to list him any higher than 5th. 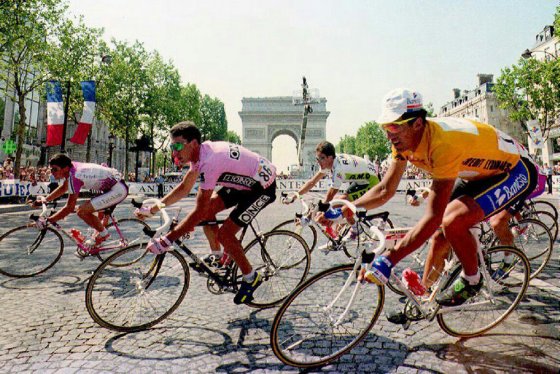 The ‘Big Mig’ is one of only 4 racers to ever win the Tour 5 times. Indurain ran the table from 1991-1995, setting the world hour record of 53.040 kilometers in 1994. The Spaniard is often lost in history due to his quiet demeanor. In 1995 Cycling Weekly Magazine remarked that, “he seems to do everything very slowly, as though he is trying to conserve energy even here. His eyes blink at half-speed but the gaze from his brown eyes is steady. He looks as relaxed off the bike as he does when he is on it, but you are aware that you are in the presence of a great bike rider.”

Despite Miguel Indurain’s modesty and silence, he left a loud mark on the history Tour de France with a stretch of dominance in the early 1990s. 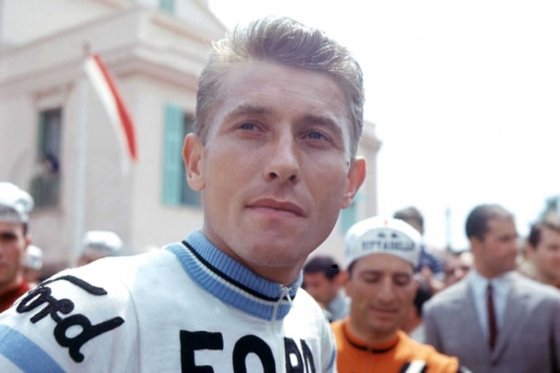 Jacques Anquetil become the first biker to win the Tour de France 5 times with his 4th consecutive victory (another record) in 1964. That 1964 victory is what many fans remember from Anquetil, when he was a part of one of the most memorable moments in Tour history, the Duel on the Puy de Dôme. He would retire from racing only 2 years later due to health concerns.

Anquetil would get involved in the debate over drug use in racing, saying that racers should have the right to protect their bodies from the pains that come with competitive racing. Anquetil confirmed many suspicions in the sport that doping and the use of amphetamines was taking place. While one could argue that Anquetil should be treated just as Lance Armstrong and other dopers, it should be noted that Armstrong lied about his use of drugs for years. Anquetil was not only open about drug use in the sport, but defended it vehemently. 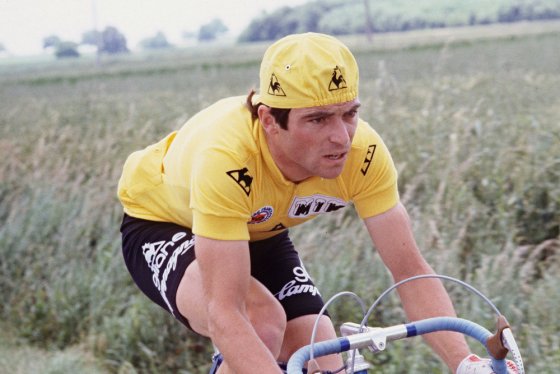 ‘The Badger,’ Bernard Hinault is tied for most all-time Tour victories, has the 3rd most all-time stage wins (28), and placed second in the Tour twice (1984 and 1986). Hunault would win back-to-back tours in 1978-79, and again in 1981-82. If it had not been for a knee injury in 1980, perhaps Hinault would have broken the record and won 6 Tour championships. His record tying championship was all the more impressive due to the fact that Hunault suffered a broken nose in a crash during the early sprint stages of the race.

His final victory in 1985 was the last time a Frenchman has one the Tour de France. 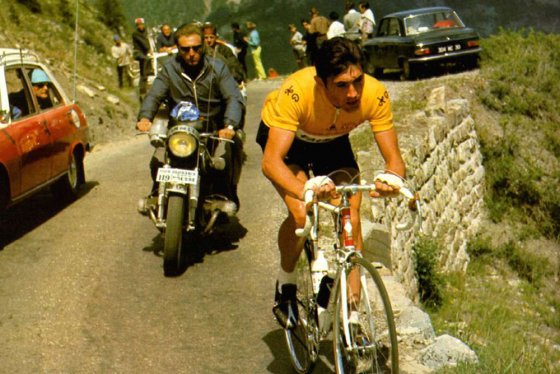 Eddy ‘The Cannibal’ Merckx is widely considered the greatest biker of all-time, and with multiple Tour de France records, he is the greatest Tour champion too. He won 5 yellow jerseys, a record 34 stage wins, and in 1969 won the yellow (overall leader), the green (points), and polka dot (mountain) jerseys all in the same Tour. Only 2 other races have won all 3 jerseys in their careers, but no other racer has won all 3 in the same tour.

Like other bikers on this list, injury may have stopped Merckx from more yellow jerseys. He placed second at the 1975 Tour after a fan punched him in the back mid-race, leaving him with an inflamed liver and the need to seek medical attention. More injuries would force him into retirement as the most decorated biker and Tour de France champion of all time.