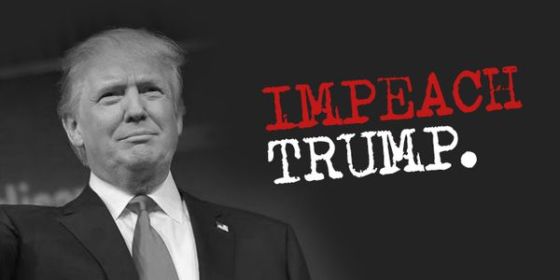 “President” Donald Trump has been the target of criticism since before even being elected president in November of 2016, and for good reason. His approval ratings have been quite low compared to other presidents over the past two decades. Along with low approval ratings, Trump has some very questionable policies in regards to issues such as immigration, foreign policy and the economy. Donald Trump is quite unpopular in many circles throughout the United States and the rest of the world. However he isn’t just wildly unpopular, he is always wildly corrupt. In the wake of the redacted Mueller Report’s release, many people are looking to have him impeached. There are plenty of offenses that Trump could be charged with during impeachment proceedings, but we’ve come up with the five most obvious offenses that can easily get Donald Trump impeached.

One of the most obvious reasons to impeach Donald Trump is his blatant abuses of power and lawlessness. In his authoritarian administration, he sees himself as a King, not a President. One example is his decision to pardon former sheriff Joe Arpaio, a glaring abuse of his authority to pardon. This has resulted in showing indifference to individual rights and equal protections. Joe Arpaio was convicted of contempt of court after he ignored a court order to stop detaining people based on their skin color. Trump’s pardon is a clear violation of the Fifth Amendment which authorizes the judiciary to both issue and enforce injunctions against government officials.

A second offense that Trump should be impeached for is advocating political and police violence. Last year, Donald Trump provided cover for the Neo Nazi groups that rioted in Charlottesville, Virginia. The rioters murdered a protestor and Trump did not condemn this behavior. Instead he showed indifference towards the Neo Nazis and failed to protect the citizens of the United States against political violence. Trump has also encouraged police officers to physically abuse people that they arrest which violates his obligation to be faithful to the execution of American laws. He has also shared anti-Muslim content on social media which violates the laws of equal protection. These actions have been a complete disregard for the president’s responsibilities according to the Constitution.

Another reason to impeach Trump is collusion. Yes, Collusion, and tons of it. In just one example documented in the Mueller Report (there were many), Trump’s son was invited to meet with a Russian national promising dirt on Hillary Clinton. When Trump’s son met with the Russian officials, he expressed satisfaction with the information he received while both Trump aides Paul Manafort and Jared Kushner were present. This conduct clearly violates federal law which prohibits political candidates from getting any valuable information from foreign nationals. Trump covered up this meeting by lying about the actual purpose of this meeting. With Trump’s son meeting with a Russian national, there is a chance that the campaign was aided by a hostile foreign country’s effort to interfere with American politics for their benefit.

4) Profiting from the Presidency

Since being elected as President, Donald Trump has profited from his status as the nation’s top political figure. According to the Constitution’s Foreign Emoluments Clause, the president is not allowed to accept any personal benefit from any foreign government. While in office, he has kept all of his ownership interests in his family business. Every time a foreign political figure visits a Trump hotel to discuss a new project or grant a trademark, this is in violation of the constitution. One example is when the Chinese government approved of 38 new trademarks of the Trump name. China also approved of several trademarks that they previously rejected. Another way in which Trump has profited from his presidency is by funneling taxpayer money into his business whenever he plays golf at one of his properties. This action is a violation of the Domestic Emoluments Clause.

The number one way in which Trump can be impeached is with obstruction of justice. Shortly after he took office, Trump asked the Director of the FBI James Comey to abandon any investigation regarding any electoral interference during the 2016 presidential election. When Comey refused to meet Trump’s request, he was fired. During a television interview, Trump said that the firing was over the Russian election interference. He also said on is social media account that he had to fire Michael Flynn because he lied to the FBI. This proves that Trump fired Comey in order to end the FBI’s investigation of Trump’s involvement with Russia during the presidential election of 2016. This is just one of eleven examples that was presented in the Mueller Report of illegal obstruction of justice by Donald Trump.

With these five charges in mind, it is pretty clear that Donald Trump has committed actions that violate his oath and the constitution of the United States. His involvement in things such as obstructing justice, inciting political violence, colluding with a hostile foreign government and abusing his power clearly indicate that he should be held accountable. Since he violated a number of provisions in the constitution, he does qualify for impeachment.

Since taking office as President of the United States, Donald Trump has been a very controversial figure. His unique personality has offended a number of people both in the United States and abroad. Trump’s actions have also been quite unpopular among Americans and foreigners alike. With his conduct, he is clearly setting a negative example for other politicians to follow. As a result, it will be better for the United States if they make efforts to make Trump responsible for his actions with impeachment.