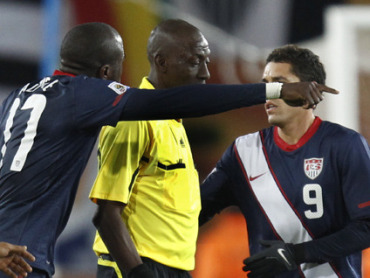 Even if you only casually follow the World Cup, you’ve no doubt heard about the controversial finish to the match between the United States and Slovenia, which ended in a 2-2 draw. Of course, the result should have been a miraculous 3-2 come from behind victory for the Yanks but referee Koman Coulibaly disallowed Maurice Edu’s goal in the 86th minute of action. Why did he disallow it? We’d show you the video, but apparently FIFA prohibits that (and hot chicks in the stands) :

Assuming you’ve seen the actual video, could you see any reason that this goal should have been disallowed? Because we sure as hell can’t, and neither can basically anyone else in the world (including Coulibaly, who either couldn’t or wouldn’t explain just why the goal was disallowed after the match). FIFA is taking notice, thankfully, and will conduct an expedited performance review for Coulibaly, meaning he’ll likely never referee another World Cup match.

But hey, he shouldn’t feel too bad, because he’s not the first referee to make a controversial blunder. Hell, it’s not even the first time in the last month that an official has completely blown a big call. It doesn’t make him suck any less, though. Here are some other famous boneheaded decisions by referees…

1
Thierry Henry is a Cheating Bastard

We’ll start off with another blunder in the world of football, err soccer. With Ireland desperately trying to qualify for the 2010 World Cup, the fightin’ Micks had France on the ropes and looked to be in good position to qualify, particularly when French star Thierry Henry slapped down a ball near the goal, which would mean a penalty kick for Ireland and the victory.

Oh, wait, the ref never called the handball, and Ireland would wind up being eliminated from World Cup contention by Henry’s play inside the box. Since the match Henry has come out and admitted that not only did the ball strike his hand, but he intentionally swatted it down. Meanwhile, the Irish are left at home during the World Cup drowning their sorrows in beer, rather than celebrating their team playing on the world’s biggest stage with even more beer.

World basketball dominance by the United States isn’t something new that only began to occur after the Dream Team gained fame. In fact, beginning in 1936 the US men’s team won seven straight gold medals and had never lost a single game in the Olympics heading into the 1972 summer games. And then this happened:

That’s only the short version, of course, and the full game can be found in bits and pieces on YouTube. Even so, you can see simply by watching this short clip that the game-winning basket by the Soviets never should have counted. Why? Well go back and watch the guy inbounding the ball, who steps onto the court as he heaves the ball down the floor. In case you were curious, that’s not legal.

Even before that, the US led 50-49 with one second remaining. However, the refs decided to halt the game and put three seconds on the clock, saying the Soviets had actually called a time out between two free throws by Doug Collins (which is still disputed to this day). The Soviets inbounded again and the horn sounded, with the US apparently winning. That is, until the refs once again decided to put even MORE time on the clock and give the Soviets yet another opportunity, which leads us to the above clip. This blunder was so controversial that no member of the 1972 US team has ever accepted their silver medals.

In 1999, families across America sat down to cram as much food down their gullets as they could while celebrating that time their ancestors stole the US from a bunch of Indians, and then they settled in for the NFL game between the Pittsburgh Steelers and the Detroit Lions. This was back when the Lions didn’t totally suck, and the game went into overtime. 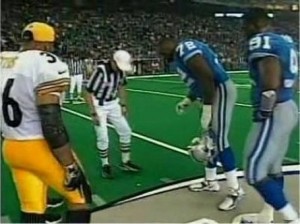 And that’s when the US learned that referee Phil Luckett either hates the Steelers, loves the Lions, or is somewhat unfamiliar with the English language. Pittsburgh’s Jerome Bettis called tails, though for whatever reason Luckett heard heads. The coin landed on tails, and the ball went to Detroit. The Lions would then go on to earn one of the only wins in franchise history.

For those who are visiting the site from outside of the US, in the game of American football a team has four downs to either advance 10 yards or score. But when Colorado met Missouri in 1990, apparently the refs decided that the Buffalos needed a little more help than that to accomplish either, and gave them a 5th down.

Putting aside the fact that the CNN anchor in that clip looks kind of like the dude who makes those crazy sounds in Police Academy, Colorado would use its extra down to punch it into the endzone and pick up a 33-31 victory over Mizzou. What happened was that the Buffs spiked the ball to stop the clock, but for whatever reason the refs either didn’t notice, didn’t care, or had money on Colorado to cover the spread, and decided that spiking the ball didn’t count as an actual down.

And we’ll come full circle by ending with another controversial play in the World Cup, this time going all the way back to 1986 when Argentina toppled England behind Diego Maradona’s goal, sending the Brits home and advancing the Argentinians to the semifinals. Maradona dubbed the goal the “Hand of God,” stating that the goal was scored “partly by the hand of God and partly by the head of Maradona.”

Or, you know, entirely by the hand of Maradona. See, in soccer/football (Soofball? Foccer?) you’re not allowed to use your hands. If you were paying attention when we told you about Thierry Henry, you’ll know that. In reviewing the footage, it’s pretty clear that Maradona goes up and punches  the ball past the keeper and into the net, though the ref apparently never saw it.

The good news is that since Maradona is now the coach of Argentina at this year’s World Cup, the hopes are high for unintentional comedy and controversy. Oh Maradona, what wacky shenanigans will you get up to next? 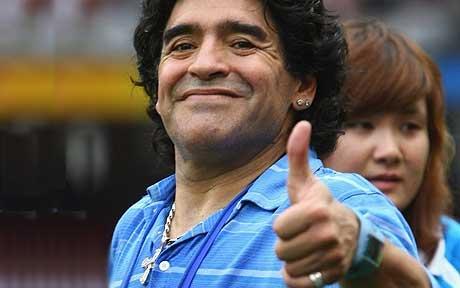