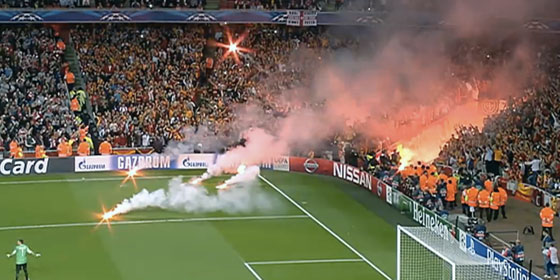 Oh hey, that soccer pitch above is on fire. No cause for alarm though, it’s just another day at a soccer game, as Galatasaray fans (whom are fond flares) set the Emirates Stadium on fire recently. Hooligans make the sport more fun!

Americans are so uncivilized, right? Ask pretty much any foreigner: all we do is sit around eating Cheetos and watching retarded reality TV shows. Meanwhile, the high society folks of Europe and the rest of the world spend their time enjoying high-brow opera and debating Shakespeare. Wrong. If there’s one thing literally everyone in the world except America enjoys, it’s soccer. And as it turns out, there is no greater fuel than soccer for rabid, uncontrolled drunken violence. We have five insane examples that prove our point, if the fire above isn’t enough for you… 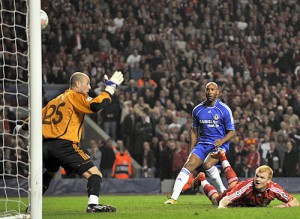 Andrés Escobar was one hell of a star in his native Colombia. He was a defender for Medellin’s Atlético Nacional club, and a damn good one, too. He was even good enough to start for the Colombian national team during the 1994 World Cup. And good soccer players are as loved in Colombia as attractive, large-breasted young actresses are in America (and everywhere else in the world).

But just like veteran Halo nerds still sometimes get the old “I’m gonna charge the fucker with a rocket launcher” impulse, great soccer players still sometimes make mistakes. During a game against the United States, Escobar moved to block a U.S. midfielder and accidentally deflected the ball into his own net. The USA went on to win 2-1, and Colombia was eliminated from the competition.

Ten days after the game, Escobar was chilling at a Medellin bar when an angry fan burst in and shot him twelve goddamn times. According to eyewitnesses, the man chanted “Gooooooooooooool!” between each shot, qualifying this as one of the douchiest murders in history.

Humberto Muñoz Castro, a Medellín-area bodyguard, was arrested and convicted for Escobar’s murder, the motivation for which may have been Castro losing a lot of money after betting on Colombia. He was originally sentenced to 43 years in prison, but we all know how well the justice system works in Latin America. In 2005 he was released due to “good behavior.” Which, in a Colombian jail, probably means he only killed a few of his fellow prisoners.x

Switzerland is Not as Peaceful as You Think 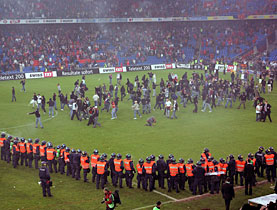 It really sucks when your team loses at the last minute. On May 13th, 2006 in Basel, Switzerland, it really sucked.

The high-ranked FC Basel 1893 was playing its last game of the season against its major rival, FC Zürich. Basel had come in first in the Swiss Soccer League the last two years. In 2006, Basel was ranked at number one by half a game. Behind them was, you guessed it, FC Zürich. This game would decide the winner.

The game was neck-and-neck until the end, with several dirty fouls only serving to pump up the crowd. As the last minute approached, the teams stayed tied 1-1. A tie would be enough for Basel to win the league yet again; Zürich could only take it by winning the game. With Basel fans and players already beginning to celebrate, Zürich broke through their defenses. A last-second goal by Zürich defender Iulian Filipescu ended the game.

Well, the drunk Basel fans were not about to take that shit. As Zürich began to celebrate, hundreds of Basel supporters charged the field and began attacking the players. Iulian Filipescu, the guy who won the game, got smacked several times and even got a flare thrown at him. Several referees were also attacked, which is the absolute worst thing to do when trying to get revenge for your team.

Riot police, who are pretty much a requirement at all European soccer games, tried to form a human shield in front of the Zürich stands. But naturally the hooligans just went ahead and attacked them too. Filipescu, who got attacked again while celebrating with the Zürich fans on the other side of the field, said “forget this shit” and kicked the rioters away. Meanwhile, the riot spread to outside the stadium, where police unleashed tear gas and water hoses on drunk ruffians well into the night. Basel, which was known as a hotbed for hooliganism even before the riot, earned itself a reputation for drunken thuggery that even Scotland has to be jealous of.a 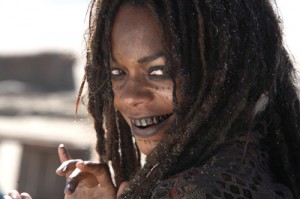 Soccer is big in every corner of the world, including parts of Central Africa so remote that the only source of communication to the outside world is an independent UN-funded radio station. That’s exactly the case in the North Kivu Province of Congo, where soccer is one of the few distractions the locals have from the deadly conflict in the region, along with alligator wrestling, prostitutes, and cheap Cameroonian beer.

In 2008, a heated match was going on in the town of Butembo between the local Nyuki System Club and their rivals, Socozaki. With Nyuki down near the end of the game, the team’s goalie ran to the center of the pitch and began chanting “fetishist” spells in order to turn the game around, presumably by possessing the Socozaki players into making sixteen own goals in a row.

Angry Socozaki supporters immediately started protesting the act of alleged witchcraft, and fights broke out between rival fans. That’s when some genius military police officers started firing into the air in order to calm the crowd down, which of course caused a mass panic as people rushed for the exit. More brilliant cops were waiting to tear gas people as they ran out. Sadly, thirteen people were killed in the ensuing stampede. 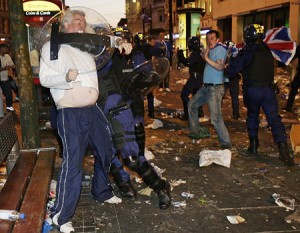 Next, we get to Scotland, the undefeated champions of all things drunk and disorderly. In 2008, thousands of Scots headed to the English city of Manchester to watch the UEFA Cup Finals between Glasgow’s Rangers FC and Russia’s FC Zenit Saint Petersburg. As the big day dawned, the Manchester City Police presumably yelled out a collective “FML” before rolling out of bed. They knew that thousands of drunk, angry Scotsmen would be trouble. They didn’t think it would be this bad.

It all started when a large screen in Piccadilly Gardens that was supposed to broadcast the game malfunctioned. The game was still several hours away, but naturally, half the Rangers fans were already piss drunk. Faced with the possibility of missing the game, a few fans started rioting and fighting.

After a few minutes, Rangers fans started picking fights with Zenit supporters and – we’re not kidding – attacking armed police. When technicians came to try and fix the screen, they got pelted by empty bottles and other random crap, which forced them to retreat. Fans started breaking windows, defacing property, and other general angry mob stuff. By the end of the game Manchester had been forced to draft emergency riot police, and ambulances were only entering Piccadilly Gardens with a full police escort. A Zenit fan got stabbed on his way into the stadium, and several cops and civilians were also injured. Luckily – and surprisingly – nobody was killed. Today, British people basically just use the riots as an excuse to talk shit about Glasgow.a 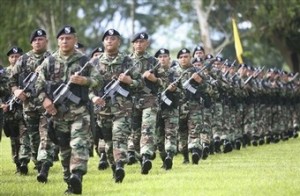 And thus we reach what we feel safe in calling the biggest overreaction to a sports match in history. The year was 1969, and the Central American countries of Honduras and El Salvador were suffering from diplomatic issues due to border disputes and immigration. Tension was high in both countries. Then came the second North American qualifying round for the 1970 World Cup.

Honduras and El Salvador had to play three games for a spot in the World Cup. With the two countries splitting the first two games, it all came down to big game number three. The Honduran press began to over exaggerate and even make up incidents of violence against Honduran citizens in El Salvador, with the Salvadorian press doing the exact same thing vice versa. Yeah, thank goodness that never happens anymore, right?

With El Salvador being declared the favorite, Honduras supporters started rioting and attacking Salvadorians. You know, “just in case.” Really only looking for an excuse to go to war, El Salvador ran with the violence and officially broke off diplomatic relations with Honduras.

Two weeks later, El Salvador invaded. The “war” only lasted about 100 hours before both sides realized how incredibly stupid they were being, signing a treaty that resolved absolutely none of their diplomatic issues. Of course, the playoff match for the World Cup qualification still took place almost two weeks after it was supposed to, with El Salvador taking it 3-0. But irony is a cruel bitch. The Salvadorians lost both their matches and were eliminated in the first round.