Media > Movies > Five Movie Adaptations and the Badasses They Butchered

Five Movie Adaptations and the Badasses They Butchered

Adaptations rarely stay true to the source. We understand that and hence, we don’t expect much. But sometimes characters get butchered to a state that even their mothers can’t recognize. Big bad badasses get demolished into pathetic henchmen while complex anti-heroes become one-dimensional simpleton shits. Why? Because Hollywood thinks we are fucking idiots, that’s why.

In the movie, Juggernaut was just Vinnie Jones acting as himself — a football yob. The Cockney was painfully overdone and there seemed to be not one ounce of brains in his muscular frame. Mid-way through the movie, we almost expected him to say how “nuffing” can beat Manchester United and start pounding on Cyclops because that bloke’s wearing the wrong football shirt. 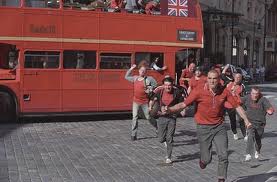 His powers were described as not being able to be stopped once he gained momentum, which is pretty cool until you realize that he got stopped by Juno and that gay leech kid. 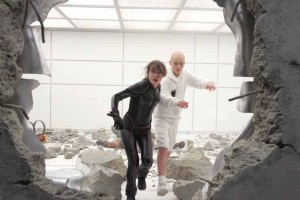 Then, you think back and realize that, hey! How did the police manage to stop him in the first place? 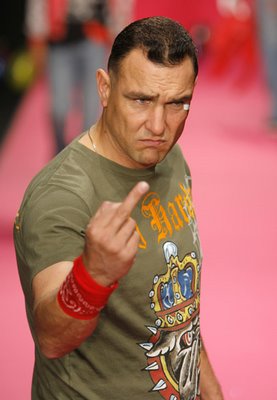 By fuck you, that’s how.

What they didn’t show you :

The comic book Juggernaut was godlike. Seriously. He was the Earthly representative of some god called Cyttorak, and his powers basically consisted of “being able to do shit and not give a fuck.” He was invincible.

The word “juggernaut” literally means an overwhelming force that obliterates everything in its path. Juggernaut was impervious to all forms of damage and in addition was, super strong. Not just shitty movie level strong; he was like Superman, Hulk and Thor combined strong. 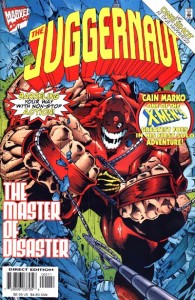 Also, being an avatar of Cyttorak, Juggernaut wasn’t even a mutant. His powers were based on magic, which explains why he was so unnaturally powerful and reveals to us that he could not have possibly been stopped by leech. In real-life, he would have just juggernauted the shit out of that kid for being such a lame-ass.

By the way, Juggernaut and Charles Xavier were actually brothers, a fact the filmmakers cleverly alluded to in the film by giving them vastly different British accents, although in the comics none of them were actually British. Way to go, Hollywood.

In Iron Man 2, Justin Hammer was portrayed as this pathetic, lame idiot who kept on trying to steal Tony Stark’s inventions. He often tried to one-up Stark, but the intense rivalry bordered on comical as he always failed. 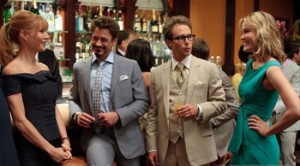 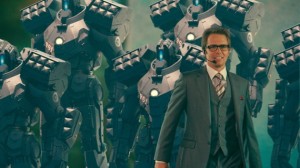 But to his credit, always with utmost hilarity.

Then, he whored himself out to the enemy by consorting with Whiplash, all in the name of finally getting the better of Tony Stark. Of course, that didn’t happen. Whiplash totally screwed Hammer over.

Afterwards, he introduced us to his stupidly impotent weapon — a missile about the size of a pencil which he dubbed his secret weapon of sorts. As its flaccid form suggests, it did absolutely nothing and was a poor reflection of his manhood. A neuter-bomb, if you may. Random dick joke.

The Justin Hammer in the comics was actually pretty cool. Firstly, he looked like this:

And he was not some poor man’s Tony Stark. Hammer was the shady backer of all Iron Man villains. He was the reason the villains don’t just sell their technology and make a fortune. The awesome gear never belonged to the villains in the first place. They were Hammer’s and loaned to them on the condition that they use them against Tony Stark.

He was practically the Godfather and his penis is of average size and girth.

In The Return of the King, Denethor was the Steward of Gondor, a caretaker of the throne whose ass got too comfortable. He was a jerk-ass, a concoction of all the most negative qualities ever. You don’t have to know who he is or what he does, but one look at him and you detest him with unspeakable hatred.

That’s how much of an asshole he was. Denethor refused to light the beacons and call for aid, thereby almost dooming Gondor. He also half-bullied Pippin into becoming his slave, forcing him to sing while he ate his dinner like an avaricious nutbag. 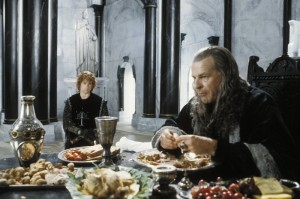 Then, during the siege of the city, when his country needed his loosely defined “leadership” the most, Denethor tried to kill himself because he just didn’t care anymore.

Denethor was kind of almost not that bad of a guy. The novel Denethor was more of a tragic Shakespearean figure than the infantile shitbag he was in the movie. In fact, Denethor personally lit the beacons to call for aid and actually was so touched by Pippin’s sincerity that he made him one of his elite guard.

He was a man of unquestionable will and courage and fiercely defended his country. Sure, he did turn a little crazy toward the end, but that was the result of him using the palantir (the big ball eye thingy) for espionage against Sauron. This was a man who gave his mind for his country.

In the end, Denethor endured further tragedy with the death of his two sons. Completely broken, he burnt himself on a pyre. 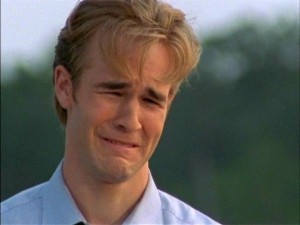 It brings tears to our weary eyes.

Seriously, if the book was real, Denethor’s descendants would be like totally suing Peter Jackson right now.

Max was played by Jason Patric; someone who obviously never read the graphic novel as he portrayed Max as someone who obviously had never had sex. He was whiny, irritating and most of all, an absolute idiot. He blatantly killed people for major transgressions such as “being fat” and “holding an umbrella in a manner which displeased him” and sometimes just flipped out for no reason.

Everybody lived in fear of him because he was absolutely crazy. His grand plan involved buying weapons from Arabs, selling them to terrorists and making a fortune as a middleman. It begs the question of why the terrorists would not just buy from the Arabs in the first place, but then we recall the fact that Max is completely ape-shit.

In the end, Max was defeated and had to take the bus home. He then ended up getting robbed by two under-privileged youths. How does a person like that come into a position of power? Hollywood. That’s how.

Max in the graphic novel looked like someone who got laid 24/7. 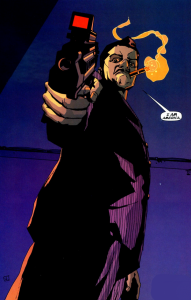 Just look at that porn-stache.

He controlled every aspect of the US defense and had the CIA, NSA and the US Army all in his pocket. He was the shadow behind the man that was America. Nobody even saw his face until the last issue. 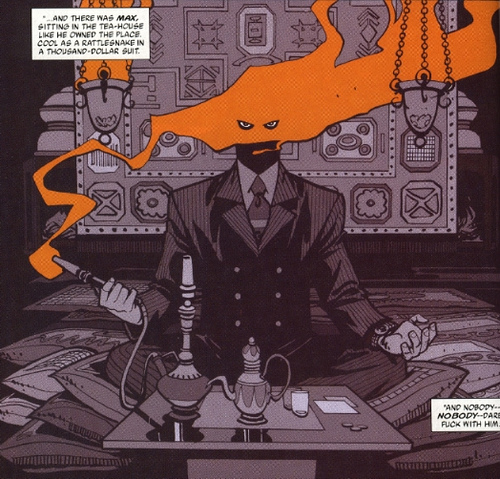 Furthermore, his actions, whose goals were world destruction/domination, came out of a tragic and misguided sense of patriotism. The Max codename was a relic of the Cold War and the character was one who did a lot of shady things for his country back then.Violence changes a man and now that the US has embraced diplomacy, Max felt jaded and betrayed. He was another extremely complicated character that Hollywood just promptly shat upon.

Bane made his first movie appearance in Batman and Robin and was totally retarded. He was a dimwitted henchman of Uma Thurman and could say nothing but his own name. Seriously, how dumb does one have to be to lose his intellectual capacity for speech? Any more stupid, Bane would be a stegosaurus.

When disconnected from Venom, the drug that continuously courses through his veins, Bane regressed into this skinny little guy who looked like he just got robbed of his lunch money. All in all, he was redundant, stupid and entirely worthless. People are probably wiping their asses with Bane because he is cheaper than toilet paper and also much softer. 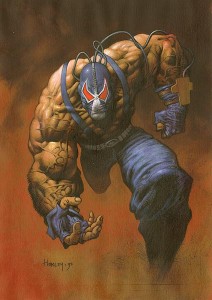 Bane was totally awesome. He was basically Batman, only taller and Mexican. The comic book Bane was born in a prison in some random South American country. Being deprived of a childhood, much like Batman, Bane trained himself to be extremely badass, but while Batman’s motivation was to rid the world of evil, Bane’s was so that he could become more badass.

He was like an eerie mirror image of Batman and possessed similar intellectual attributes. In the famous Knightfall story arc, he figured out Batman’s secret identity and used every fiber of his resourcefulness to completely screw Batman over. Then, he ended everything with a merciless coup de grace and literally broke Batman’s back. 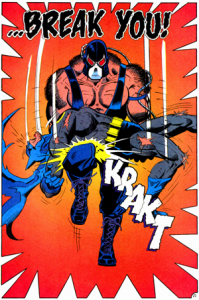 After that, when the whole crazy debacle was over, Batman and Bane teamed up and fought crime side-by-side, all the while thinking they were brothers because it was clearly all fun and games. 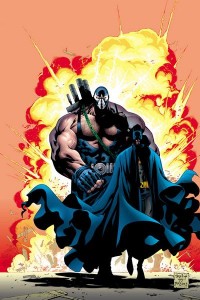