Media > Movies > Five Movies That Were Almost Other Movies

Five Movies That Were Almost Other Movies 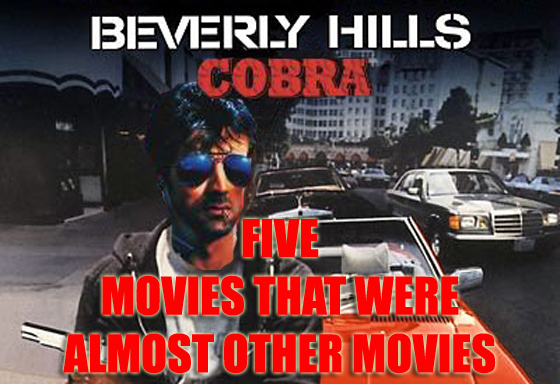 It’s no secret that scripts get passed around Hollywood more than a Kardashian sister at the ESPY’s after party. Tales of scripts lingering in development hell are famous and nightmarish for aspiring screenwriters and internet comedy writers who aspire to someday be aspiring screenwriters.

Of course, there are cases of a script written specifically with an actor in mind, but for whatever reason – artistic differences, lack of interest in making a sequel, lack of animated rabbits – they get turned into an entirely new entity from how they were originally envisioned. Such as…

Perhaps the most famous example of a movie being turned into another movie, the original script for Beverly Hills Cop was based around Sylvester Stallone, and it was set to be an action film with Sly starring as Axel Foley. Sly was all ready to make the film, too, except he had a few ideas for the script that didn’t fly with the rest of the people behind the movie. It was an action film, sure, but it wasn’t a hard action film. Sly wanted it to be gritty and bloody, and the script just didn’t really fit that style, which called for more humor than John Rambo was used to. 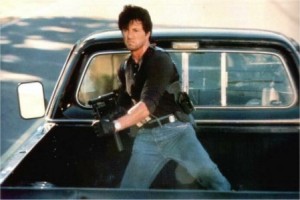 This is about as zany as Stallone gets.

So Sly walked, and the script was rewritten to fit the comedic stylings of newly cast Eddie Murphy. It would go on to kill at the box office, turn Eddie Murphy into a bona fide star, and eventually help kill Judge Reinhold’s career when he agreed to make a second sequel. Sly took his original idea and turned it into his own movie. That movie was… Cobra. There’s even a subtle reference to this fact in Beverly Hills Cop 2, when a Cobra movie poster can be seen in Reinhold’s apartment.

2. Die Hard was originally a sequel to Commando

Commando was a movie starring Arnold Schwarzenegger as a, well, commando named John Matrix. It was one of those typically deep, sensitive Ah-nold movies wherein he kills the ever-loving shit out of almost everyone in the film with rocket launchers, machine guns and a horrible, horrible accent that we’re supposed to ignore while we try to believe he’s ex-US Special Forces. 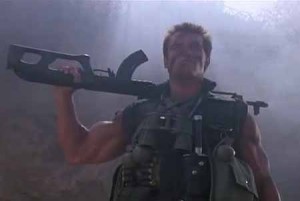 Looks American enough to us!

Originally, based on the success of this little art film, a sequel was planned and was set to be based on the Roderick Thorp novel Nothing Lasts Forever, but as Arnie’s last sequel (Conan the Destroyer) was agreed to have pretty much blown chunks, the star opted not to sign on. Instead, the film was turned into a brand new action film based around a gruff New York City cop named John McClane. The result was arguably the greatest action movie in history, Die Hard.

3. Die Hard with a Vengeance was supposed to be Lethal Weapon 4

Die Hard with a Vengeance was the third Die Hard movie, and the last entry into the series that wasn’t entirely forgettable. It deals with John McClane back in New York City, dealing with Jeremy Irons, who is apparently Hans Gruber’s brother who really, really wants to steal a whole bunch of gold. In the first two Die Hard movies, McClane was primarily a lone wolf, though he had help from a sassy black man on the outside looking in at the situation the majority of the time. This outing, however, the writers decided to give the black dude with attitude a bit more to do and introduce Sam Motherfuckin’ Jackson as McClane’s unlikely partner, making this the first Die Hard that’s really a buddy movie. Sadly, that would continue in Die Hard 4, except they tossed in the ‘I’m a Mac’ guy.

Anyway, if any of the interplay between loose cannon McClane and “I’m too (whatever) for this shit” Jackson in Vengeance seemed familiar, well, there’s a reason for that. The script was originally intended to be Lethal Weapon 4, so all of that angry black man dialogue was intended for Danny Glover. We can totally envision this being a Lethal Weapon movie and considering that whole “I hate (N-Words)” sandwich board in Harlem scene was initially written for Mel Gibson, it suddenly makes a whole lot more sense. 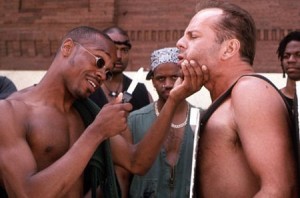 Let's see your Three Stooges routine get you out of this one, Riggs.

4. Tears of the Sun was supposed to be a sequel to Die Hard

At this point, we think it’s safe to say that action movies all exist in a “Six Degrees of Die Hard” sort of world, because apparently if there are guns and explosions involved, the script was either meant to be a Die Hard film or will ultimately get turned into one somewhere down the line. Anyway, Tears of the Sun is a movie you probably don’t remember, and for good reason — it kinda sucked. 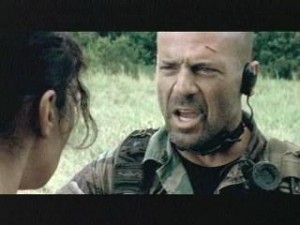 Bruce Willis is a commando leading a special forces team to extricate a teacher in South America before some drug kingpins can kill her, or something, for some reason. Frankly, we forgot what the hell the movie was about, but it features Monica Bellucci, who is ridiculously hot, and Cole Hauser, who probably looks at his Good Will Hunting costars with an incredible amount of disdain and envy. Don’t ask us how they were planning to incorporate John McClane into this originally because no matter what you say, it just won’t make a lick of sense to us.

5. Who Framed Roger Rabbit was originally a sequel to Chinatown

It’s really a shame how few people these days have seen the classic Chinatown, the 1974 film that was nominated for 11 Academy Awards and starred Jack Nicholson as hard-boiled private detective JJ “Jake” Gittes. It was a true film noir along the lines of Humphrey Bogart movies like The Big Sleep and The Maltese Falcon (not to be confused with the Millennium Falcon). It also featured one frighteningly fucked up twist at the end, which we won’t spoil, but totally could because shame on you for not having seen this film.

Who Framed Roger Rabbit, on the other hand, was a relatively lighthearted blend of live action noir and comedic animation starring Bob Hoskins. It most famously gave us Jessica Rabbit, who until Lara Croft was probably the only animated character to ever star in masturbatory fantasies of young and old males alike. 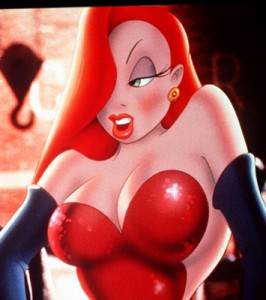 But you see, here’s the thing: a major subplot involves Cloverleaf Industries, which threatens to take over Toontown and build a mass transit system in its place. This was originally planned as the plot for what was initially going to be the third and final chapter of a proposed Chinatown trilogy, only we’re assuming it would have involved fewer zany antics (though you never know, based on Nicholson’s performance in Batman). The plan was abandoned after the first Chinatown sequel, The Two Jakes, bombed and the idea was recycled into a movie that would ultimately cause children nightmares every time they thought of Judge Doom’s terrifying, bulging eyes at the end of the film.