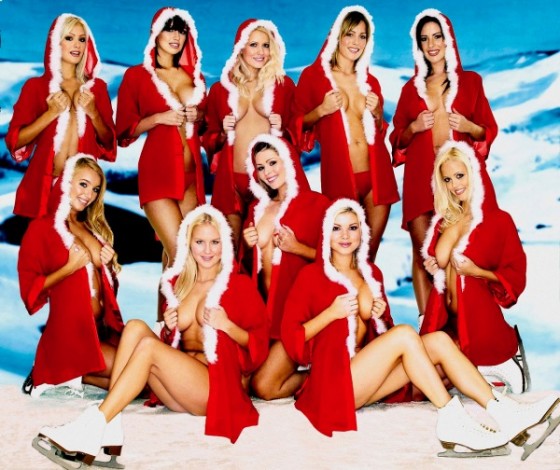 The Beauty... of the wager.

One of the only gifts the men of the house are guaranteed is football. We have games on Thursday, Saturday, and Sunday which means the book can be as convenient as 7-11 this week.

After all… you’re ass is already broke. Why not try to double up?

Here’s one degenerate’s view of the handicapping slant on the NFL this week.

This is the first of three OVER tickets we’re punching this week, for multiple reasons. In general we appreciate the lack of caring and defense that often arrives in the late weeks of the season (these players have performance bonuses on the line… you think they don’t want help each other out?) and as a result we tend to see the scores soar.

However, this year we are even more in love with the over based on the lack of elite defense in the league. You can count the number of proven defenses on one hand and have fingers left over to hold coffee, and in most of the lines we found this week it appeared the book was adjusting.

Then we find the Steelers laying a strong 15 (up from an open at 14), in control of their own destiny as they chase a top seed in the AFC with the Pats serving as the lone obstacle of known value. Carolina is fighting for the top pick in the 2011 NFL Draft and more than a few have noted the Panthers would be more interested in losing than winning.

I disagree… you have a coach set to be fired (John Fox), you have a rookie quarterback looking to save his job (Jimmy Clausen), both having no desire to tank games or chase the first pick at all, and there are two undeniable leaders in the clubhouse also fighting for the rights to draft Andrew Luck (Cincinnati and Denver). Move past the low-scoring win over Arizona last week (19-12) and you have a slew of games tabbed with high point totals: 31-10 Falcons, 31-14 Seattle, 24-23 Cleveland, 37-13 Baltimore, 31-16 Tampa, and 34-3 New Orleans. They give up a TON of scoring… giving me reason to think the Steelers could come close to the line on their own.

And yes, the Pittsburgh D is pretty good… but they’ve given up points to the bottom feeders along the way: 21 to Cincinnati, 16 to Buffalo, and 22 to the Jets over recent weeks. I would bet the Steelers can get us close to the number by the end of the third and then we can hope for a garbage 14 from Clausen and company. 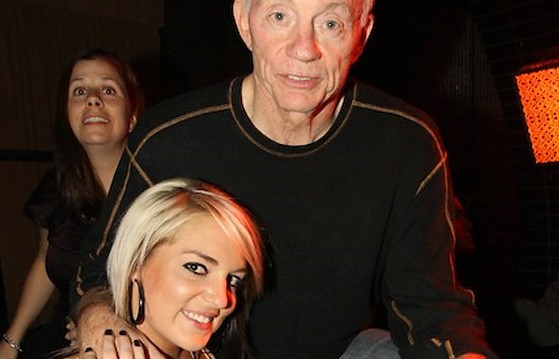 The Boys have Jerruh feeling up the young again.

The Al Davis of the rednecks fired his coach early and cut the reins loose on offense with Jason Garrett, and they’ve been involved in high-scoring throwdowns since. In fact, go back to the Week 4 bye and you’ll find the Cowboys are scoring 29.4 points per game since. Along that same span, they are giving up 31.3 per to the opposition.

They invite you in, you take turns holding each others hair while you puke the defense down the shitter, and you watch the ball fly.

Arizona may suck a fat ass, but they can score when given the opportunity. The Cards posted 23 on Oakland, 30 on the Saints, 35 against Tampa, 24 against Minnesota, and 43 against Denver.

I’m not sure if John Skelton has the arm to jump into a throwdown, but I am sure Dallas will let him try.

(How much you wanna bet that’s Jerruh’s niece or some shit like that? Something to make me look like an asshole… I’m sure of it.)

These teams already played once this season as division foes, in San Francisco, and the Niners needed overtime and a kicker to get the three-point win. In that game the Niners let rookie quarterback Sam Bradford complete 30-of-42 passes for St. Louis for 251 yards, and while he didn’t get it in the end zone, it was one of two statement games Bradford punched on his growing rookie resume.

Now he gets ’em at home. Not only does Bradford get San Fran in his own house, but he gets ’em at a time when they are limping and wounded. The offensive line is riddled with injuries. They’ve gone back to Alex Smith at quarterback. When they lose they lose BIG, and when they win they win by the skin of their teeth.

Worst of all, San Fran is 1-6 on the road, falling by an average point margin of 16.7 points per game… and they are getting two lousy fuckin’ points against the Rams who could seal the division title with a win a lil’ help.

They don’t have the dogs to keep Bradford in check… and we didn’t even touch on Steven Jackson. 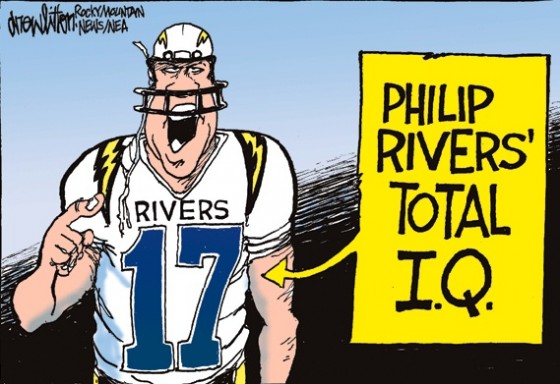 I couldn’t give a fuck less if Rivers is an imbecile. He can throw.

Career numbers versus Cincinnati: 64.9% completion rate, 646 yards in four games with six touchdowns versus two interceptions… and this year’s defense may be the worst Cincy has put on him yet.

The Bengals have Carson Palmer at quarterback. They’d rather have Andrew Luck at quarterback, and the Chargers would rather be in first in the AFC West (a game behind Kansas City) and in the playoffs than letting an MVP-worthy season go to waste.

The Bolts will be following the gameplan laid by Pittsburgh three weeks ago and they will lay the wood to the Bungles. That’s what everyone, including Cincy, wants.

The Saints are in full view of their goal. Win and your in.

If you want to win against Atlanta, you better score… ’cause they will. The Saints are going to let Michael Turner run like OJ Simpson with blood in the water, just like they did earlier this year when he hit for 114 while Jason Snellin gave ’em the 62-yard reach around. The final in that one: 27-24. Their games last season: 35-27 Saints, 26-23 Saints. The year before: 34-20 Birds, 29-25 Saints.

These teams cut loose around each other and Drew Brees has been an absolute monster in ’em all. For his career against Atlanta, Brees is completing 68.2% of his passes, good for 2,935 yards and 20 touchdowns versus eight interceptions.

He’s be lighting the world on fire in chase of the playoffs under the bright lights on the indoor turf of Monday Night Football.

We’re taking the over (and we’re tempted to take the three with the Saints).

If you’re down with college ball, we’re lovin’ us some Hawkeyes, getting three against Mizzou at the Insight Bowl. Missouri is the Show-Me-State… making Iowa the Blow-Me-State when they hook it up in Arizona. The Big 12 North is a piece of shit and you don’t get rewards for being the smartest kid on the short bus. Give us Iowa and the three.

And remember, Jesus loves the two-game parlay… but the three-gamer is bordering on gluttony. Let’s not get out of hand, heathen.