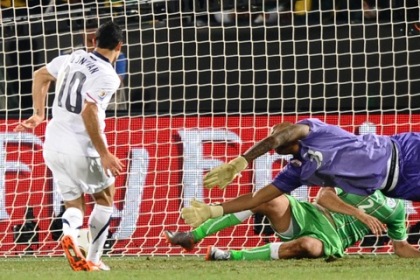 If you watched the US men’s national team take on Algeria at the World Cup yesterday, you probably went through the same range of emotions that we did: confidence at the outset, relief when that early Algeria shot went off the crossbar, anger and disbelief when we had another perfectly fine goal disallowed, irritation when we missed chance after chance, and then depressed resignation when it looked like the game would end in a scoreless draw and we’d be heading home early in another embarrassing exit. And then this happened:

It wa a big day not just for American soccer, but also American sports in general, and it made us think about some similarly awesome and way-too-close-for-comfort finishes that we’ve seen from US teams on the international stage before. Here are some of our favorites…

Jonathan Bornstein is pretty much a hero. No, not to American soccer fans, who collectively gasped when they saw he was replacing Oguchi Onyewu in the starting lineup versus Algeria. Nope, Bornstein is a hero to the country of Honduras. You see, in the qualifying rounds leading up to the World Cup, the US took on Costa Rica in a friendly and trailed deep into stoppage time. If Costa Rica held on to win, they’d qualify for the World Cup. If the US managed to pull out a miraculous draw, Honduras would go through and Costa Rica would have to spend the World Cup at home.

And in the 95th minute of action, Bornstein became a hero to Hondurans…and a hated enemy to Costa Ricans everywhere.

4
Justin Leonard Tells Europe to Suck it From 45 Feet

The Ryder Cup is one of the greatest and most illustrious events in the world of golf, and it pits the United States against Europe to determine who the best golfers in the world are. It officially started in 1927 and is played every two years and has typically been dominated by the US. However, Europe topped the US in 1995 and 1997, and looked to be on the verge of taking the 1999 Cup as well. Played in Brookline, Massachusetts, the 1999 Ryder Cup saw the Americans trailing Europe 10-6 heading into the final day before an amazing and miraculous run by the Americans, who won the first seven matches of the day and added an eighth when Jim Furyk topped Sergio Garcia.

However, the Americans still needed one more victory to clinch the Cup and complete their improbable comeback. And that’s when Justin Leonard tapped in a birdie on the 17th green to seal the victory. Oh, did we say tapped in? We meant drained a 45-foot putt.

Before they ever had a chance to topple Communism (that’s what happened, right?), the 1980 US Olympic hockey team needed to actually qualify for the medal rounds, similar to what’s going on with the US in the World Cup right now. To have any realistic chance of advancing they needed to pull out a draw with Sweden, though the odds of that seemed slim when Herb Brooks’ team found themselves trailing the Swedes 2-1 with 41 seconds to go.

That’s when the US pulled goalie Jim Craig in order to get an extra skater on the ice, and that player was Billy Baker, who blasted a shot into the net with 27 ticks left. Sure, the 1980 team is remembered for the Miracle on Ice, but that improbable victory probably never would have been possible without Baker’s last-minute heroics.

Yes, we’re including gymnastics, which is a sport competed in both by hormonally stunted little girls or super ripped dudes who somehow perform things like the Iron Cross, which looks like pretty much the hardest thing ever. However, every time the Summer Olympics roll around the world becomes obsessed with gymnastics, and in 1996 the US women’s team vaulted that national attention into another stratosphere. Heh, vaulted. See what we did there?

Anyway, in the 1996 games the vault was the final team event, and the US needed a big score in order to top the Russians (why is it always those damn Ruskies, eh?) with all of the pressure residing on the tiny shoulders of Kerri Strug, who hurt her ankle on her first attempt and struggled with her second, which makes sense since she says that she heard something in her ankle snap. So what did she do? Naturally, she shook it off and stuck a pretty damn perfect landing, earning a score of 9.712 and winning her team the gold.

In the 2008 Beijing Olympics, much of the attention was focused on Michael Phelps and his quest to win more golds in a single games than any American in history, which he ultimately accomplished by bringing home eight golds. However, that dream very nearly died in the 4×100 relay. The US seemed destined for the silver and a cocky Frenchman seemed destined to back up his boast that France would top the US in the event. It’s only fitting that the very Frenchman who made the claim, Alain Bernard, was the final swimmer for the French team and held a lead of over half a body length heading into the final 50 meters.

Yet somehow in that instance, Phelps’ teammate Jason Lezak turned into Aquaman (except, ya know, less useless) and not only made up the distance, but somehow miraculously outstretched Bernard to steal the gold from France in one of the most dramatic finishes in any Olympic event in history. At once, Lezak managed to simultaneously keep Phelps’ record hopes alive and, maybe even more miraculously, make the United States care about swimming.