Stay Dead is a new game which seems like it’s from another time. It’s what’s known as a “Full Motion Video” game, a genre of video game that died out by the late 1990’s when game graphics outdid the use of live action video that defined FMV games in terms of flexibility and utility. Its controls and combat methods also seem stuck in the early 90’s as well. Nevertheless, Stay Dead, with all its badness, is the whole reason that videos games exist. And humans to play them.

Stay Dead is about a plainclothes demon hunter that keeps the damned from entering heaven by kickboxing or wrestling them without using any evident religious items or powers. That’s going by the game’s trailer where the anonymous hero says pretty much what was just described above. None of that is actually included in the game itself, just leaving you to wonder what your motivation is for fighting five extremely diverse villains. Curiously, on a video review of the game, someone claiming to be the guy who played the lead said it was all cut because a financier took exception to the story for religious reasons. Apparently Catholics do not like to see demons get beaten up (more on that later). 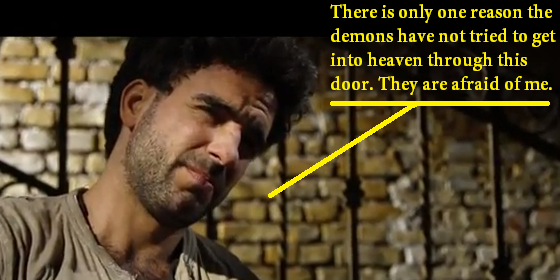 4. The Music and Photography 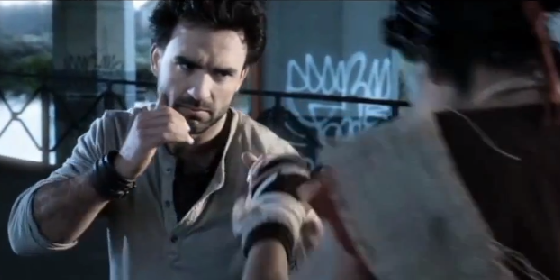 As you can see from the stills in this article, this game is extremely well-photographed for what it is. It’s not static camera work either, they pulled out cranes or at least camera jibs and steadicams. The lighting is often extremely good and stylish. The music is also consistently exciting and dramatic with excellent quality. All of which serves primarily to put the silliness on camera into sharp relief and more importantly indicate that the creators actually put their hearts into the project. 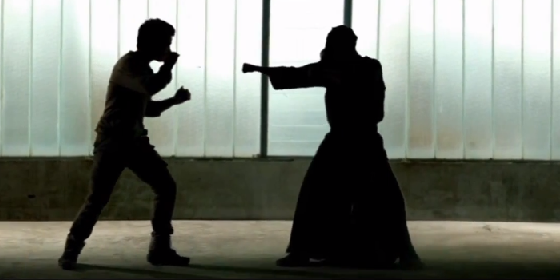 Rather than any complicated system of exchanging blows, the system is that you have ten rounds to beat your opponents hit points out of them while you by contrast don’t have a hit point counter. As the game makes a point of telling you with a title card, this means you can’t actually die in the game. This kind of drains a lot of the suspense from the game play, although as reviewers have indicated, it can still be a very difficult game at even the moderate settings. Plus it just makes sense. Your opponents are only demons after all. It’s not like they’d beat you too badly or fight dirty.

Speaking of the demons, the choices for their costuming, performances, and levels are all where this game’s badness shines brightest. The second weirdest of these is Iblis. He’s a guy that you sort of judo wrestle in a junkyard, looking like a completely unremarkable homeless person. Not only that, but you fight him on a gym mat in the junkyard that is lit in such a way as to make it as visible as possible. And this is the only part of the game shot in black and white. Because it’s so classy.

Drukerg is an undead Nazi officer with a censored swastika wearing an extremely baggy uniform. And of all things, you fight him with a stick thin enough to be a used as a pointer on a dry erase board (because it’s a traditional Italian fighting style called “cane fighting.”) It’s got to be the stiffest, most awkward looking fight ever and makes very clear just how unsuitable for combat an overcoat is. If you win, the video segment of you defeating the villain that threatens hell by jabbing him in the coat is hilarious. 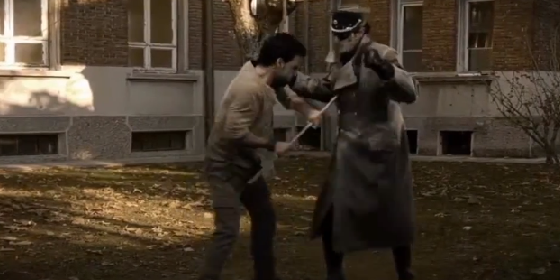 If you think this is exaggerating about any of the aspects of this game, check out this demo of the gameplay:

So if you can find it in your heart, visit stay-dead.com and buy a copy. Then buy one for all your friends and family. And maybe buy another copy every time you want to play it again. Any group of gamemakers as misled as the groups Brucefilm and Playstos Entertainment need to be motivated to go as far astray as possible. If we’re lucky, they’ll add us to their Press Page!