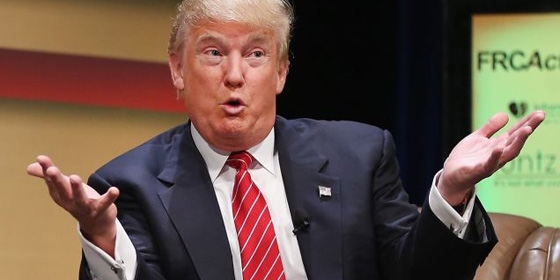 Apparently it IS possible to have a bigger moron than George Bush running this country. A big, loud mouthed, offensive, toupee hair looking, idiot is now the “President” of the United States of America. Just when we all thought Bush was the worst possible thing that could happen to us our fellow countrymen have proved us wrong and put a train wreck into office. You know something horrible is happening but you cannot look away. It is glorious in its absolute destruction.

One of Trump’s most infuriating traits is his inability to tell the truth, and an even more frustrating inability to discern the difference between fact and fiction on the Internet. He’ll believe anything that supports his internal narrative, regardless of how ludicrous the conspiracy theory is. Famously he’s held the belief that Barack Obama was born in Kenya, and more recently that Obama tapped his wires in Trump Tower. Below are five other examples of ridiculous conspiracy theories that Trump actually believes and has openly talked about on Twitter or other media sources.

5) Asbestos is Actually Quite Safe 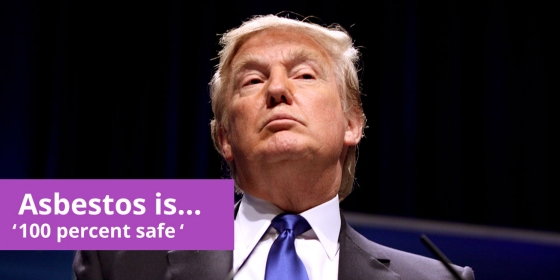 Despite the evidence to the contrary, Trump actually believes that asbestos is safe for humans. Regardless of the fact it causes cancer and kills approximately 12,000 people a year our commander in chief once tweeted “If we didn’t remove incredibly powerful fire retardant asbestos & replace it with junk that doesn’t work, the World Trade Center would never have burned down.”

Trump claims that the asbestos myth was started by the Mafia so that they could capitalize on the clean up. The limits of his idiocy has no bounds. In the face of tons of evidence that asbestos is one of the most dangerous substances for humans, Trump denies its ill effects. It is hard to believe our elected leader can be so stupid, but just you wait, we have four more completely idiotic and head shaking things this man believes to share with you. 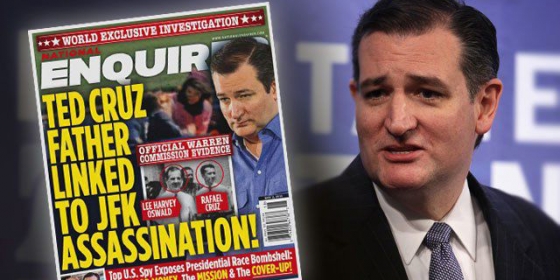 This one is almost too hard to believe at all. It is based off an article written in the National Enquirer. You know, that highly respectable magazine that writes completely true articles about alien abductions, big foot, and other totally true super natural crap. Unbelievably Trump accused Ted Cruz’s father of conspiring with Lee Harvey Oswald to shoot president John F. Kennedy. The assertion is based on a black and white photo of Oswald with several other men, one of the “mystery men” was then “identified” as Cruz’s father. Trump went on to tell Fox News, “His father was with Lee Harvey Oswald prior to Oswald’s being — you know, shot. I mean, the whole thing is ridiculous. What is this, right prior to his being shot, and nobody even brings it up.”

Despite the fact that there is no evidence that the man in question is Cruz’s father or any other information linking him to Oswald at all, Trump apparently believes the phony National Enquirer article. It is hard to believe any sane person can believe anything out of clearly a tabloid magazine with bogus articles meant to sell in the grocery check out line. Of course it is owned by a friend of Trump, and their story came out during the primary when Ted Cruz was challenging Donald’s chances in the election. Hmmmm.

3) Climate Change is a Chinese Hoax 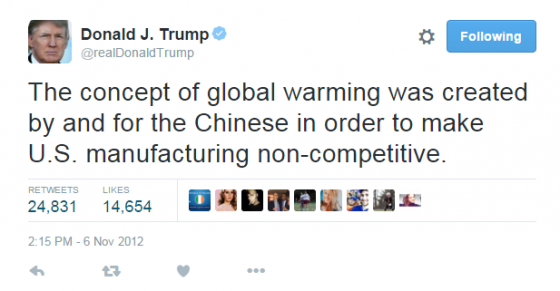 If you shake your head any harder you will get whiplash. The sheer amount of this man’s idiocy has no limits apparently. In 2012 Trump tweeted, “The concept of global warming was created by and for the Chinese in order to make U.S. manufacturing non-competitive.” In the face of the fact that 97% of the world’s scientists believe global warming is real and due to human impact, Trump has another theory. It is hard to imagine that any one on Earth in this day and age can actually believe that climate change is a hoax. On top of that to believe the whole thing is a conspiracy started by the Chinese to destroy American industry just doesn’t make any sense. 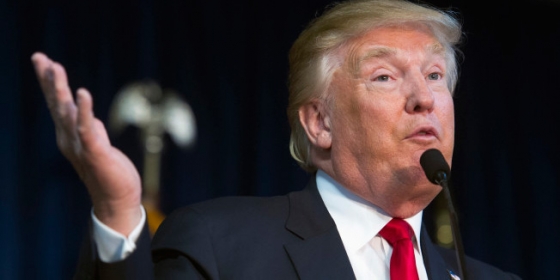 Our idiot in chief believes that ISIS is supplying cellphones to refugees who are trying to enter the United States. These phones would then be used to coordinate a 9/11 style attack, according to the conspiracy theory. Although there is only one unconfirmed report from Norway of a refugee having a phone with ISIS flags on it, the American conspiracy community went ape shit with it. Of course Mr. Trump believes this among other ridiculous theories related to terrorism, ISIS, and refugees. Of course he also called Barack Obama the founder of ISIS, so his credibility is questionable. He announced at a Debate in late 2015, “tens of thousands of people having cell phones with ISIS flags on them, I don’t think so. They’re not coming to this country if I’m president.”

Nonsense like this is what led Trump to attempt to ban all Muslims and Refugees from entering the United States. Luckily our courts make decisions based on laws and facts, and not some crap that Trump saw on InfoWars.

1) The California Drought is a Hoax 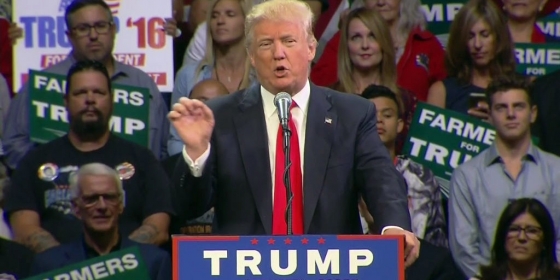 The California Drought was just recently declared over, after a very wet start to the year. However that drought has been a serious issue for the past few years. In spite of the fact that California was the driest it had ever been in over 500 years, our moronic “president” believes that the drought was a hoax. “There is no drought. They turn the water out into the ocean.”

He went on to claim that the water was being held captive by environmentalists in Washington and other government factions. When in fact the drought covered about 95% of the entire state. This idea was another popularized by his friend Alex Jones of Infowars. Now that the drought is over, we’re sure Trump will take credit for ending it, apparently by releasing the captive water.