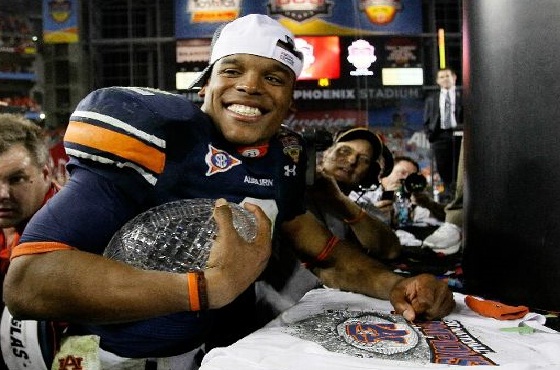 And THERE ya’ go… another amazing BCS conclusion!

The college football season has reached yet another euthanastic end. The best team won, the second-best team made it hard, and the team that may have made it all interesting was left on the outside looking in.

Congrats, college football fans. Rejoice. Better yet, admit it… its like that time in college when your roommate walked in the dorm right when you were about to pump yourself into a dirty sock, jerkin’ off all over yourself and couldn’t be more proud only to feel the immediate wash of death and embarrassment when your boy catches you polishing your helmet.

You don’t REALLY get there and you want to be rid of the memory of it all.

Maybe you feel we learned Cam Newton and the Auburn Tigers were the kings of the 2010-11 college football season. We feel we learned much more, and more is, as always, a bit more entertaining.

(BTW, I want full credit when “euthanastic” becomes a real word… a fantastically suicidal end resulting in the emotion of relief.) 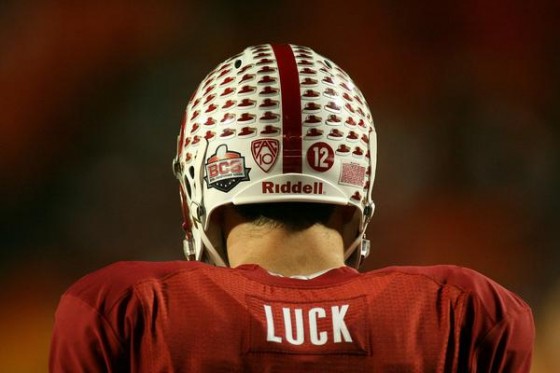 Settling for second best in Carolina...

“Cam Newton can play himself into the top ranks of the upcoming NFL Draft thanks to Andrew Luck’s decision to return to Stanford.”

I would bet every patron of sports radio heard at least three different heads say that this week, and he didn’t. Cam was just good enough to win the BCS Championship (20 of 34, 264 yards, two touchdowns, one interception, 64 rushing yards) and that should be just good enough for selection in the second round of the NFL Draft… if not the third. Now he’ll run through the tortures of criticism and insanely-specific evaluation that will all but destroy Newton’s hopes and dreams of getting an earnest shot to compete as a rookie at the professional level.

Mark it down. We’ve got an eternity between the joy of today and the day of the Draft, and you’ll listen to weeks of Kiper and McShay and Mayock explaining why he won’t work at the next level. Cam didn’t pull a Vince Young, he didn’t raise his stock, and now he has nowhere to go but down.

Why are there so many fuckin’ DUDES?!?!

I would bet they spent three times as much air space on the Auburn sideline showing those annoyingly Glee-rrific kids from down south than they did against the offering of cheerleaders put forth by the west coast – ’cause the west coast is the most – and I fail to comprehend WHY.

Auburn may have on won the field but they sure as fuck didn’t win in our hearts and on the sidelines. We got some early shots of the Oregon girls… 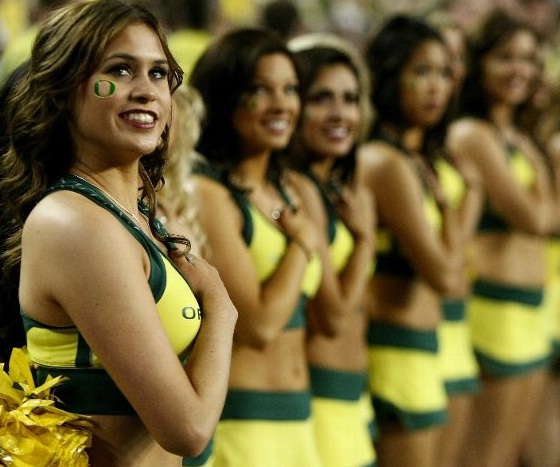 The winners... no matter what the scoreboard says.

That’s why the AP photo spread doesn’t offer a single image of the Tigers sideline other than the coach (Chizik looks like a real-life Joe Swanson… the crippled cop from Family Guy) while the Oregon selections are of the girls and the fans. Seriously… pick your favorite major-media source, hit up the AP photos from the game and you won’t find a single pic of those grunts from the south.

Everyone knows the good lookin’ girls in ‘Bama… go to ‘Bama. Roll Tide.

Saban & Meyer are in Love 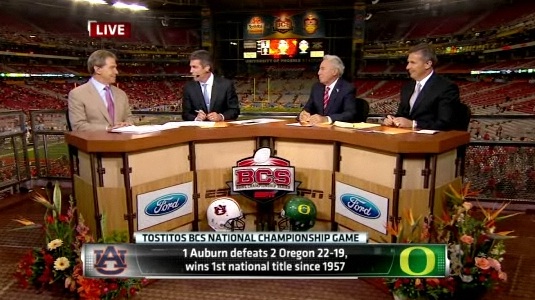 Watching those two SEC pricks on the same set was like watching the mother fucking holidays at my house when BOTH families come over… you ponder death, you ponder the warmth of death, maybe you run a nice cold blade over your wrist just to watch it’s shimmer, and you think about all of the horror in the world that doesn’t come anywhere close to annoying you as much as watching Nick Saban try to speak without fumbling all over his own fucking tongue and Urban Meyer trying not to make snide-ass comments in retort, giving Saban that look like he can’t resist calling him out for shitting his own pants on air but he doesn’t because he can’t stop giggling… you fucking quitter.

All I wanted was the Lee Corso head… 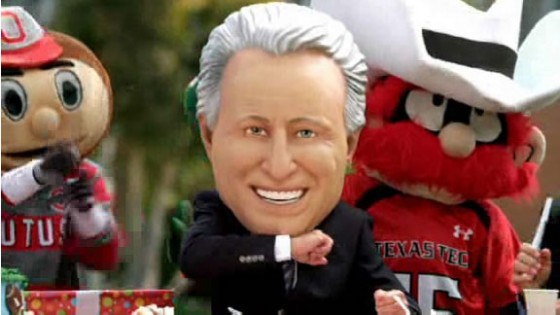 I LOVE that thing!

… is that too much to ask? Really? I thought Fowler was going to go Anchorman and tell the entire football nation to go fuck itself right in the middle of those two assholes running over the prompt to make their scatter-shot points that drove me absolutely insane. Corso Head would have saved the day.

Its not rocket science. I’m an ape. Entertain me. 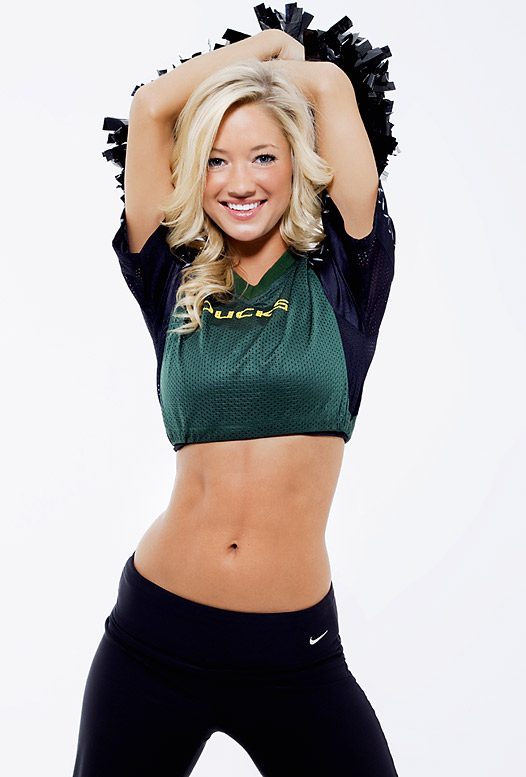 That’s TWICE in two days I got her up on the site. I’m telling you… not even close. The girls at Ole Miss are solid but the girls at Oregon… it’s unreal. I’m pretty sure its some kind of sweat-shop sponsored deal with Nike… the guy owns the place. He pays these girls. I’d pay these girls if I owned Nike to come and entertain at my games. I’d put this crew up against most of the NFL litters they bring through.

Heading into the game, more than a few in attendance also pointed at Amanda Pflugrad as a fan favorite… 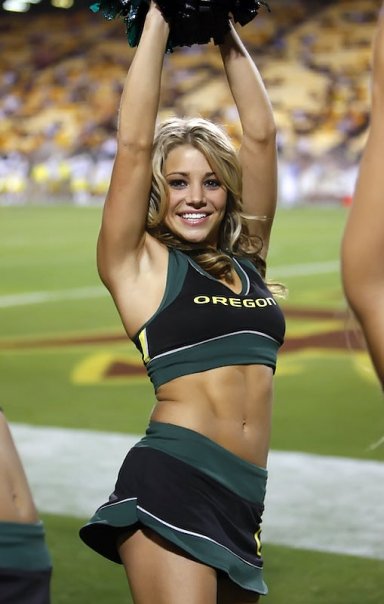 I love my Ducks.

… and we figured you would agree. It must be the water at Nike. I don’t know, but I’m not gonna try and fix it ’cause it ain’t broke.

Its time for Erin Andrews to step aside. It’s Katelynn’s turn. 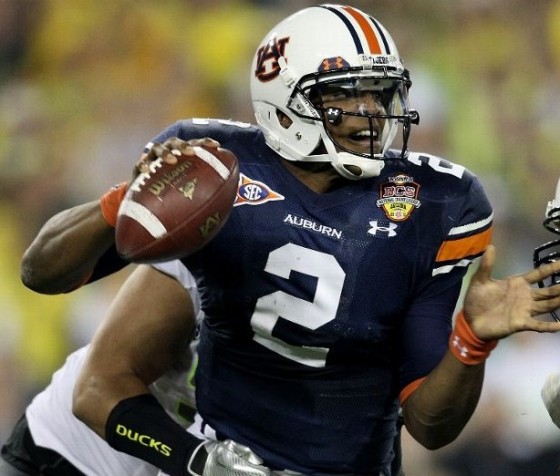 The only winner in college football this season?

Here’s what I learned thanks to college football in 2010-11… there are no more arguments to be made. This system needs a playoff. 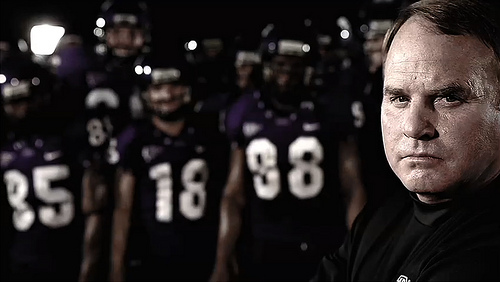 Out in the cold... the TCU Horned Frogs.

… and one didn’t get a whiff of opportunity, so I didn’t really learn if there was a champion or not. I learned, among the approved, Auburn was slightly better (but not by much, at all). We’ll never know about those that weren’t invited to chips and dip at the Fiesta.

So I learned its broke and its your job to get off your ass and fix it, NCAA.

And that’s in the books.