Many pop culture columnists claim that zombies have been done to undeath. Too many movies, books, and video games have been made about them in recent years, they say. Often they say the whole zombie genre is just like the mindless, shuffling subject matter.

We don’t agree, as some artists still manage to create zombies with enough skill or cleverness that they remind you why the undead become so popular in the first place. Others occupy a place in zombie lore so significant that we’ll provide them a quick salute here even if they’re not the most slick versions of ambient corpses. We’re proud to present, Five Unforgettable Zombies… 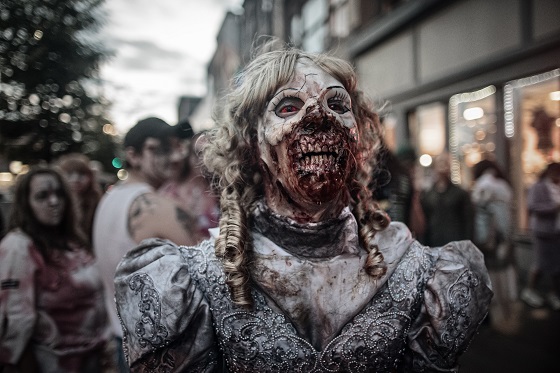 Tice Lerner‘s zombie makeup job looks like it walked out of an ideal adaptation of Pride and Prejudice and Zombies. The truth is that apparently it’s just something he seemingly made for the hell of it and placed on Deviantart. The lovely dress, contacts, and six part prosthesis were too good to not become somewhat famous after Reddit got wind of it, and its viral spread is no doubt impending. 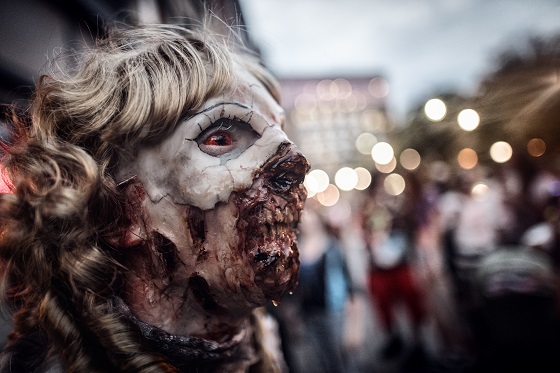 Also, it should be mentioned that’s actually a man named Dillon Utter portraying the Necro Doll. That might seem like gratuitous information, but if we can cause gay panic in necrophiles that were under the wrong impression about this character, we’re not about to pass that opportunity up. 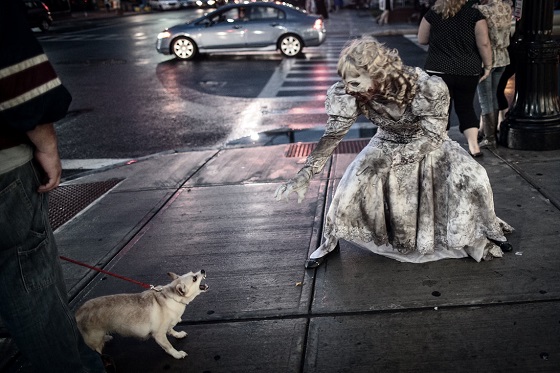 One last thing: Gunaxin would be remiss if it did not include this screencap with the perfect ad that once appeared over one of the photos on DeviantArt. 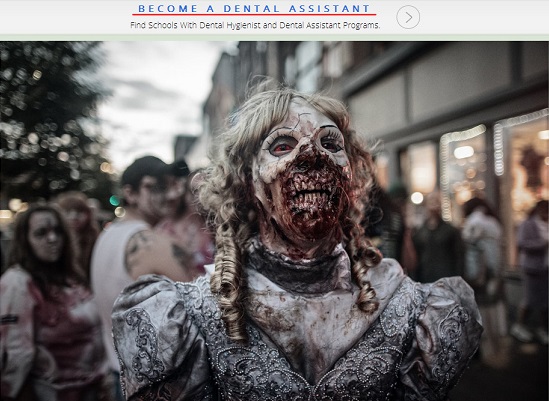 Back in 1978, Lucio Fulci’s film Zombie (Zombi 2 in his native Italy) significantly raised the bar on zombie makeup standards. Prior to that, even such luminaries in the field as George Romero (more on him shortly) were content seemingly to spread some face paint on their walking dead and roll film. The most prominent, creative, and yucky was a zombie since nicknamed “Maggot Face” with live worms crawling on one of his eyes. That’s a touch rarely seen since.

3. Bill Hinzman in Night of the Living Dead

Here he is, the first modern portrayal of a reanimated person. Not a lumbering hulk in the style of Frankenstein’s monster or someone under the influence of Caribbean magic. This was the first zombie motivated by the sole desire to eat people shown on screen.

In the actor’s opinion, the character had some issues. He told Night of the Living Dead writer/director George Romero that although he was supposed to be playing a mindless and slow creature, he has the presence of mind to break a window with a rock, beats a younger man in a grapple, and does a very good job chasing a car even for a human. Romero’s response established the defining philosophy of zombie fiction when faced with an lapse of narrative logic or a scientific inconsistency: He told Hinzman “Do it anyway.”

The oft-quoted zombie mantra “braaaiiins” was introduced to zombie fiction in 1985 by the horror-comedy Return of the Living Dead. Before that, zombies were pretty much universally content with any old bit of humans they could get their teeth on. Tarman, the first zombie to say it, hasn’t aged perfectly. He looks a little too animatronic in some shots and the lip sync on him saying “brains” is a little dodgy. Still, his effectiveness as a killer and character design won him a place in fan hearts. How many other zombies have their own IMDb page?

5. Cargo‘s “Father” by Magro and Tilden

“Father” from this 2013 short film is not too much to look at as far as zombies go. But god, his story features by far the most inventive use of a zombie in possibly the last fifty years of walking flesh eaters. On top of that, it’s incredibly touching as these things go. No doubt more “manly tears” have been shed over Cargo than the rest of zombie fiction since the genre started. Gunaxin will say no more that might spoil the movie, just watch it for yourself.