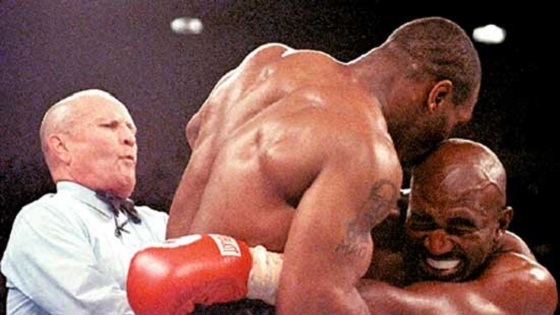 If you’re not a boxing fan then you probably think Mike Tyson biting Evander Holyfield’s ear off is the epitome of low in a sport that most already consider barbaric and corrupt. And we won’t argue against it – the man chewed through an ear – but boxing has suffered numerous other black eyes that warrant just as much attention.

Mayweather’s Shots Heard ‘Round the World 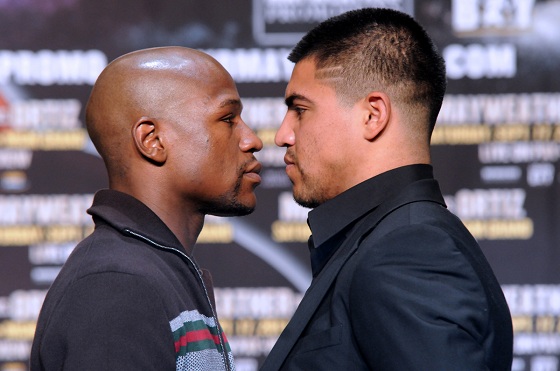 If you don’t follow boxing too closely, you should know that Floyd “Money” Mayweather, Jr. is rated the number one boxer in the world by most organizations that rank those sorts of things. Some of these rankings may be based on actual statistics, but a majority of them are born only of fear and intimidation. Mayweather is a scary, scary man built only to destroy the things he cannot love nor understand. His professional career stands at 42-0 with 26 knockouts. When Mayweather knocks you out, you don’t forget where you left your keys so much as you forget where you live.

When "Star Power" rolled around in June 2011 it was Victor Ortiz’s turn to get his health insurance policy in order. Mayweather easily commanded the first three rounds, but Ortiz gained traction near the end of the fourth. After getting inside Mayweather’s punches and forcing him into a corner, Ortiz seized the opportunity to deliver an illegal headbutt, cutting the inside and outside of Mayweather’s mouth. Realizing that he may have just pissed off the man getting paid millions of dollars to break the bones in the upper half of his body, Ortiz showed even ballsier audacity when he apologized to Mayweather with a hug. 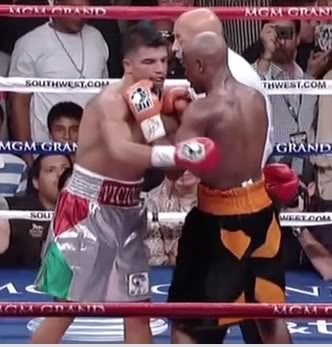 Non-boxing fans may not understand this, but hugging is actually a fully legal move in the ring, unlike the headbutt. Also unlike the headbutt, a hug does fuck-all nothing to actually hurt your opponent. What’s more, if there’s a single person on this planet you don’t want to hug, it's Floyd Mayweather, Jr. Men who appreciate hugs don’t face domestic assault charges. His own shadow knows better than to touch him.

The fight resumes after a brief timeout and Ortiz goes for a hug one more time. Mayweather finally returned the love the only way he knows how: with his fists.

As the commentators and the hissing audience allude to, it’s not a classy thing to one-two sucker punch a man when he’s coming in for a quick mid-match snuggle, but in Mayweather's defense, he doesn’t get paid to be classy, and anyone tuning into a boxing match looking for a civil face-punching has zero idea how the sport works. The fight was on, however, so the controversial knockout was perfectly legal. 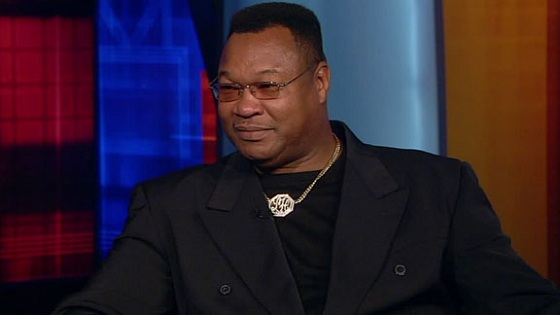 One of the most bizarre strategies in boxing is to simply get underneath your opponent’s skin and just really piss them off. In theory, this distracts your opponent, but in practice it usually gets you severely beaten. A good example is Benny “The Kid” Paret, who kept calling Emile Griffin a homosexual during their second fight. Notably, this was Paret’s last fight, primarily because Griffin put him on the receiving end of a fatal coma. For an example that’s less of a buzzkill, consider Marvin Frazier playfully dropping his guard against Larry Holmes, which prompted Holmes to playfully punch Frazier’s face in until the ref called for the bell.

That was in 1983, so by 1991 it should have been assumed that Larry Holmes wouldn’t take guff. But that memo never seemed to reach Trevor Berbick, who made the well-educated decision to take verbal shots at Holmes’ wife. Keep in mind that the two hadn’t fought for ten years at this point, so this wasn’t for the benefit of some great in-ring strategy. This was just Berbick straight-up messing with Larry Holmes because he could.

This led to a street fight between the two (who would have guessed?). Things only ended when the police separated the two, but it didn’t really end because Larry Holmes doesn’t take guff.

That may very well be the greatest drop kick performed by a boxer in the history of the sport, but then again most boxers get disqualified for that sort of thing. Of course, there are no rules on the street, but there are plenty of cars/launch pads to heighten your sweet revenge kick. It's hard to hold this against Holmes, though. What better way to get the last word in than by using your foot? 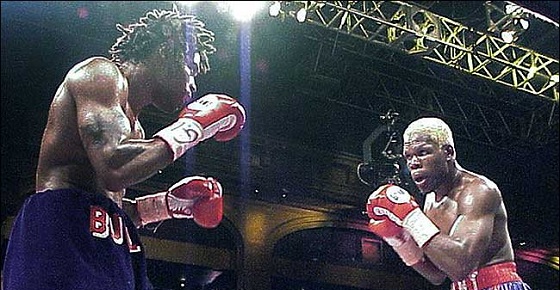 James Butler doesn’t handle losing all that well (spoiler alert, by the way). Case in point, he murdered Sam Kellerman with a hammer, an act one tends to avoid when their career is on the upswing. But that’s why Butler’s ducking prison beatings instead of blowing a fortune like a real champ. He just couldn’t keep his cool.

Rewind to November 2011. At a 9/11 firefighter charity event, Richard Grant beats Butler by unanimous decision. After the match, Grant makes the poor decision to go in for a hug.

Does there really need to be an official rule against hugging your opponent to make sure this sort of thing doesn’t happen? Do we simply need to keep James Butler away from other people? Who knows, but we do know this: punching someone outside of a boxing match, even if you’re a boxer, is aggravated assault. Either no one told Butler or he thinks crimes have some sort of point and redemption program. Grant suffered a broken jaw. Meanwhile, Butler was left to wonder how many more assaults he needed to commit before he could get a free six-inch sub.

Panama Lewis and the Deadly Gloves

If there’s a poster child for poor sportsmanship in boxing, said poster child would avoid Panama Lewis at all costs. Satan himself could step into the ring and would fight a cleaner match than Lewis. In fact, the Catholic Church considers acts of assault against Lewis indulgences. 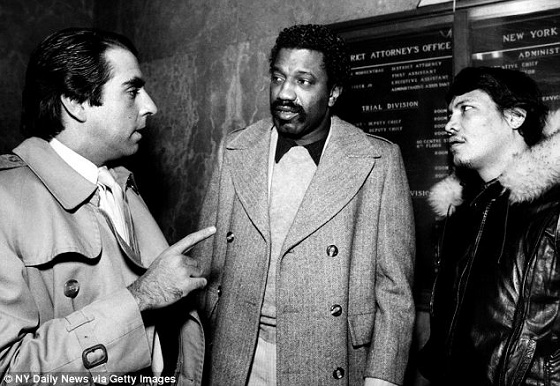 The point we’re trying to make is this: Panama Lewis, despite having the swankiest name in boxing, is a terrible cheater. While his notoriety doesn't come from fighting (he was a trainer), he went out of his way to give his fighters every edge possible in the most subtle ways possible. His most notable fighter, Luis Resto, claims that Lewis would mix various stimulants in his water to increase his lung compacity, which is like the Hi-Potion of boxing.

The most notorious moment in Lewis’ career, however, came when Resto took on the undefeated Billy Collins. Resto won the bout in ten rounds after unanimous decision, and that decision was “Billy's face is falling off of his skull.” Seriously, here’s a picture of Collins after the fight: 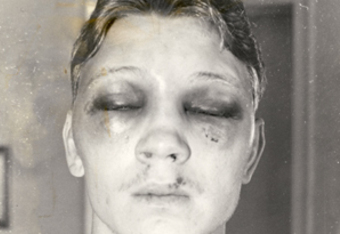 You wouldn’t think a guy built like Resto would be one of boxing’s heavy hitters, but he delivered one of the most brutal beatings in the history of the sport. If you watch the last few rounds of the fight you can see that Collins was already broken. The fight would end his career.

At the end of the match, Collins’ father grabbed the end of one of Resto’s gloves and felt something odd. The ensuing investigation revealed that the padding had been removed, increasing Resto’s punching power. All signs pointed to Panama Lewis.

According to the courts, Lewis intentionally tampered with the gloves. To make matters more douchey, Resto would later claim that Lewis also dipped his hand wraps in Plaster of Paris, giving him the punching power of a wall. When your strength can only be described with an image that’s physically impossible, there’s a one-hundred percent chance that you’re doing something horribly illegal. And indeed, the courts agreed. Both Lewis and Resto served prison sentences.

After years of denial, Resto admitted in 2007 that he knew of the tampering and chose to go along with it. Lewis, being the class act that he is, claims to be innocent in the whole affair and pins the tampering on the deceased cornerman Artie Curley.

What do you do if you feel a little under the weather? A normal person would presumably call out of work. But if you’re Andrew Golota, Poland’s answer to the T-1000, you start punching sets of genitals. 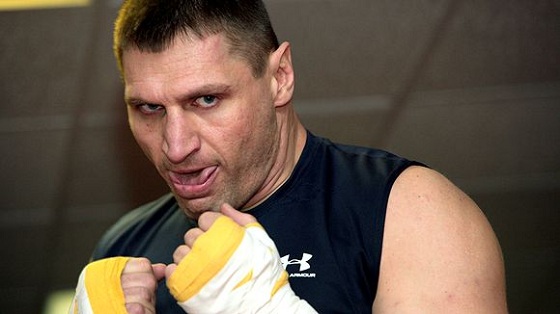 In defense of hypothetical illness, Golota has a history of punching folks in the junk. In preparation for his July 11th, 1996 fight with Riddick Bowe, his trainers kindly asked him to try not do that. Golota laughed, crushed a stone with his bare hands and implied that he would do the opposite of that.

In front of a packed Madison Square Garden crowd, Golota very clearly outmatched Bowe, amazing ringside commentary by throwing and landing more jabs than his opponent. However, like sailors to the song of a siren, he couldn’t resist the call of Bowe’s uncrushed testicles, and started working low. After a series of stern warnings did little to shield Bowe’s crotch from the fists of a joyful madman, the ref started deducting points from Golota’s scorecards. When Golota’s continued attempts at testicular contusion suggested that he really didn’t care for points, the ref threatened to disqualify him. We don’t know what that sounds like in Polish, but you probably aren’t surprised to learn that Golota ignored the threat, ending the bout in a massive riot.

You’ve got to hand it to the crowd, though. They really knew how to pick their battles. People dying in the ring has led to significantly less violence than that.