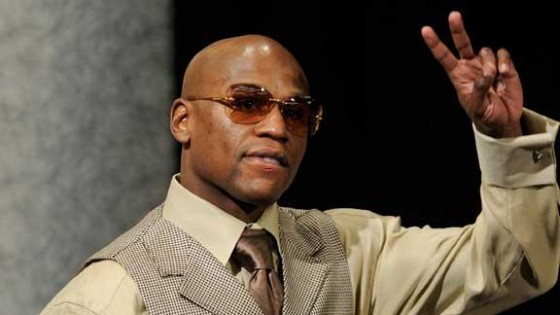 Back in 2010, Floyd “I Pick My Nose With More Money Than Any Of You Will Ever See” Mayweather Jr. was arrested for domestic violence after beating on his ex in front of her two children. He was recently convicted and sentenced to three months jail time, because he is better than every other man who beats on a small, defenseless woman and should be punished much, much less.

Originally, his sentence was to be served immediately.  As in, you-would-not-be-reading-this-today-because-he-would-already-be-in-jail. That kind of immediate. But no, the judge allowed for the sentence to be delayed until June.

Because Mayweather is really good at punching people (just ask his ex), and has a fight scheduled for May 5th against an unnamed opponent who probably stands about as much chance of winning as you or I would. God forbid that get canned!

Now, those of you with basic math skills might be wondering how a jail sentence that would begin in early January and end in early April could possibly interfere with a fight scheduled for early May. Well, Mayweather’s lawyer argued that he needs the extra time to train and prepare for the fight. Because nobody lifts weights and punches shit in jail, right? Still, Mayweather got what he wanted and is now scheduled to start his jail term June 1.