Flyers Complain About Zambonis, Then Lose 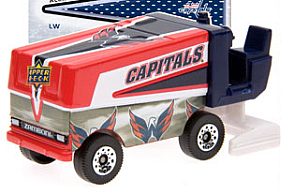 Anyone who attended the Capitals-Flyers game Tuesday was made to wait an extra few minutes as the Philadelphia Flyers, in enemy territory, protested the way the Zamboni drivers surfaced the ice before the overtime shootout. Both Zambonis reappeared from the underbelly of the Verizon Center, as one of the drivers had a discussion — or maybe even an argument — with the referee, before driving, again, over the center of the ice several times. But it didn’t help as Jose Theodore turned away all three Flyers during the shootout as the Capitals scored once and won the game, 2-1. And for anyone who saw Alex Semin’s fight against Marc Staal of the Rangers the other night, chants of ‘Release the bongos!’ could be heard as Semin took his shot.

(Editor’s note: The Capitals don’t use a Zamboni, they use an Olympia Ice Resurfacer, but Zamboni DOES sound way cooler)’

In other Hockey news, check out the video below of a 2-minute coincidental rouging penalty beween Alexei Semenov and Andre Roy. Not a fight, but Roughing. HUH?