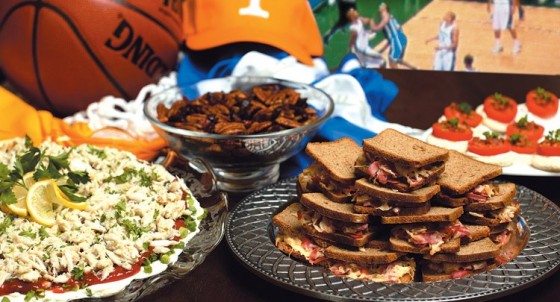 We conclude our look at Pop Culture brackets this week in grand style. After starting with Television Bracketology and Movie Bracketology, we now present the granddaddy of them all, Grub Bracketology. Arguably the folks at So Good invented this on the internet, and do it best. So we’re going to lead off with their four excellent brackets. However we’ve selected ten of our favorites from around the web (their are a shit-ton of these things) and all images click-through to their original source. Enjoy the Madness! 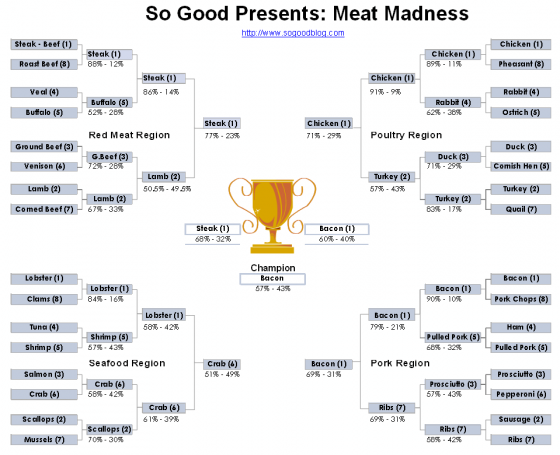 When we began, we had 32 humble meats and a bevy of interesting first round match-ups. We even had some copycats and controversy along the way. When we concluded, we were left with just one meat champion, Bacon, powered to victory in no small part by the strong support of a legion of pro-Bacon bloggers. 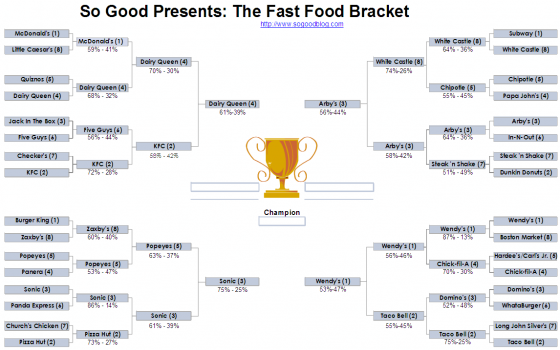 Congratulations to Dairy Queen. After more than 50,000 total Fast Food Bracket votes, they now hold the title of top Fast Food chain in America as voted on by So Good readers. 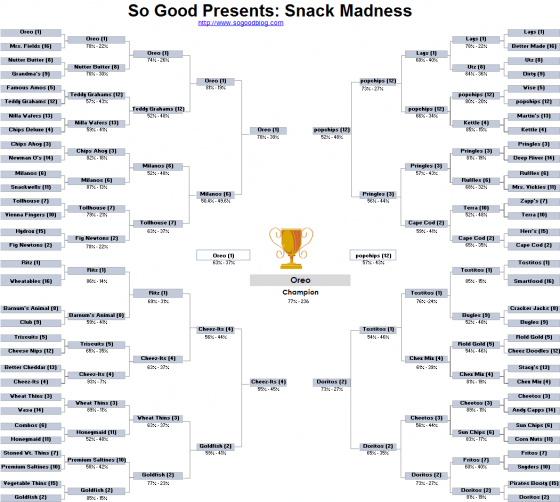 Congrats to Oreo for earning the title of greatest snack in existence. Also, congrats to popchips, the plucky #12 seed who advanced far beyond expectations to reach the finals, as well as Cheez-Its, winner of the Cracker Bracket, and Doritos, winner of the Misc. Snacks bracket. 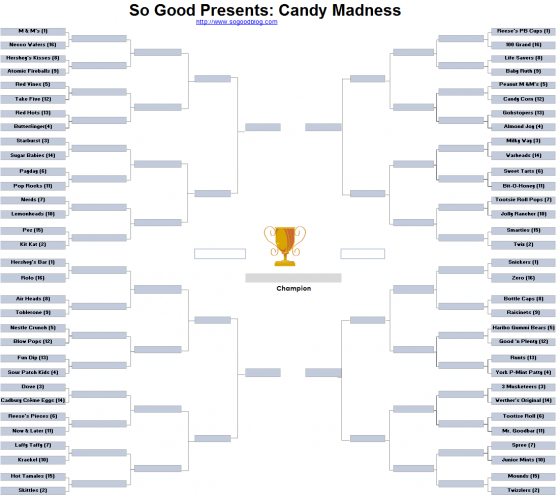 Take a look at the bracket above. #1-#3 seeds were automatic based on the top 12 best selling candy in the U.S. The rest? My own special decision making. Note that I did not include gum (quite a big seller) but pretty much any other kind of candy cracks the list. Which candies do you think are poised to make the final four? Who is your sleeper pick? Your prediction for a first round upset? Who will win it all? Which is the toughest bracket? Which candy got hosed on their seeding or with a too-tough first round match-up? Which will be the first #1 or #2 seed to fall? 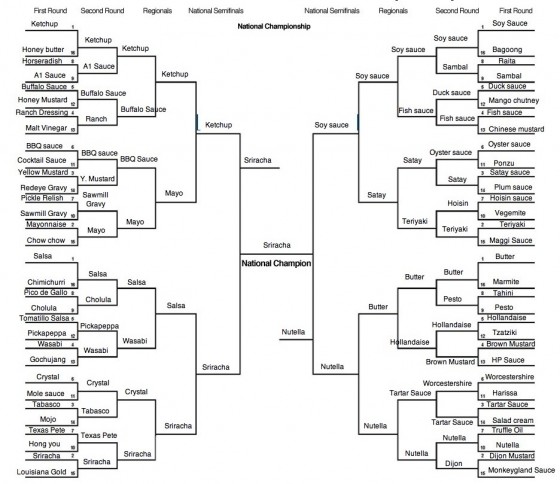 via Every Day Should Be Saturday

FINAL FOUR: Sriracha's spice was too much for Ketchup to handle, ultimately, and a blowout ensued. Soy Sauce's savory collapsed beneath a wave of chocolate sweet in their matchup, and two uneven Final Four games led to a classic final between Nutella and Sriracha. The game was even until late in the second half when you finally just admitted Nutella was spreadable candy, albeit delicious candy, and awarded the crown to indomitable Sriracha, the king of condiments. 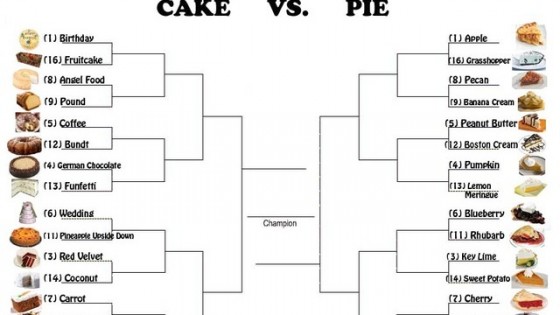 Pies and cakes invited to the playoffs were chosen and seeded at the discretion of the Selection Committee — debating the validity of entrants or their rankings is moot; we must move forward with competition. Please note, generalizations of pie and cake types cover all variations of pies and cakes in their respective genre. Carmel Apple Crumb Pie, for example, is still an Apple Pie; Yellow Birthday Cake With Chocolate Buttercream plays for Team Birthday Cake. Strawberry Rhubarb Pie is Rhubarb Pie, Neopolitan Ice Cream Cake is an Ice Cream Cake. You get the idea. 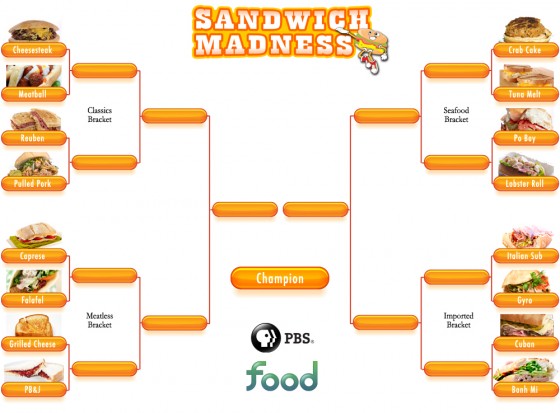 Welcome to Sandwich Madness 2012! While many of you are busy filling out those other brackets, we’ve got a competition you can really devour. We want to find out what is the favorite sandwich of our users. Our selection committee narrowed the field to 16 classic sammys that represent a wide range of culinary “heroes.” 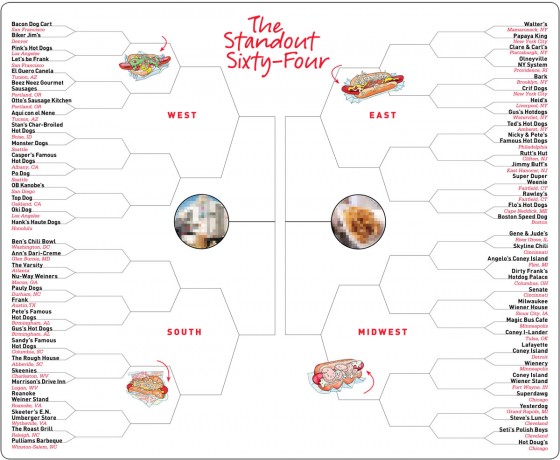 After more than 3,000 miles of travel and dozens of stands and wieners later, Ed, Hawk, and I narrowed it down to 64 contenders. Then, after much discussion, a few tense moments, and a little indigestion, we arrived at a winner. We can't reveal the top dog yet, but for now, here's the bracket. 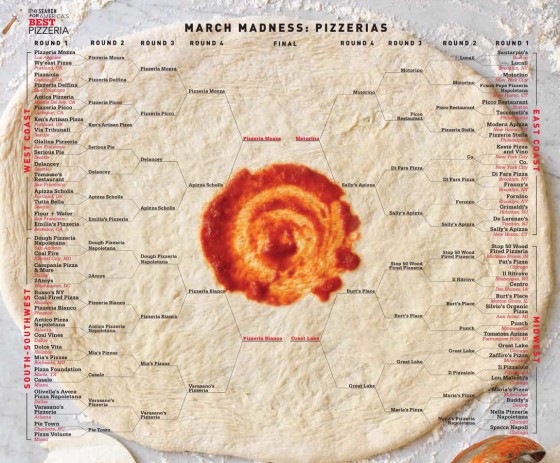 And that's what all that crazy-ass traveling I did in late October was about. I did West Coast scouting and eating for the article, while Ed did Mid-Atlantic and South, and we had trusted pizza compatriots score parts of the Midwest and the South/Southwest. 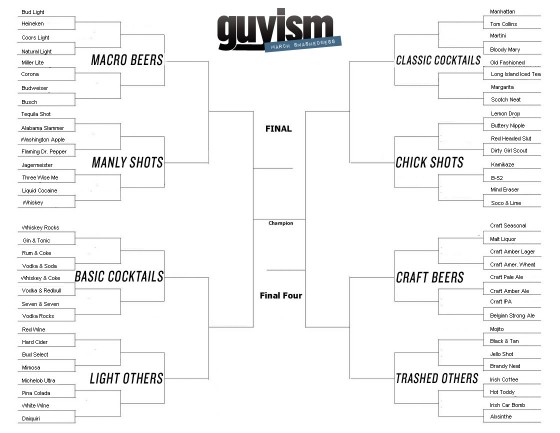 We decided we'd pick 64 drinks and put them up against one another to find which is the best alcoholic drink of 2012. And you're going to vote to decide it. This, gentlemen, is MARCH SMASHEDNESS.