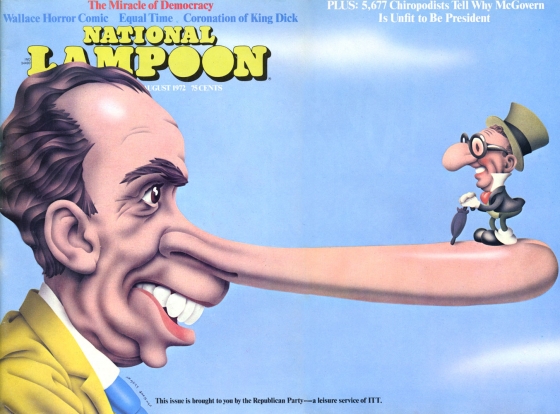 Let’s say you were a teenager in 1970. I wasn’t, but that’s beside the point… I know some of you out there were. Anyway, if you were and MAD Magazine was just a little too lighthearted and bland for you, chances are you jumped aboard when National Lampoon first hit the stands. Immediately it became a huge success, not only for its scathing humor and biting satirical wit, but also for its gratuitous use of near full-frontal nudity on the covers and suggested ‘Adult’ themes throughout. This of course didn’t stop the younger audience from getting their hands on them, and the editors were just fine with that.

At its best, National Lampoon was consistently smart and hip, yet at the same time it smashed head-long into filth, vulgarity, and subjects so taboo that the magazine was often not carried in certain places. But it was that very thing that made National Lampoon what it was: one of the greatest humor magazines of all time. Sadly, after a twisted series of buy-outs and company take-overs, as well as lagging sales, NL printed its last in 1998. Before we move on to the covers, go check out where I got ’em at lampoon.rwinters.com!