Bolt Cutter is a cellarable barley wine with an ABV of 15%. Dry-hopped with a mountain of Cascade hops, it’s balanced by a malty sweetness and spicy complexity, resulting from barrel aging some of it in bourbon barrels, some in maple syrup-bourbon barrels and some not at all (standard fermentation only). We’ve allowed the beer to mature in bottles and kegs since July so that it would be perfect for its release. Bolt Cutter pours a deep copper color and is best sampled at different temperatures to allow the flavors to unfold.

As sought after beers go for the latter half of 2012, everyone knew this was going to be both something special, and something very fleeting. As it turns out, everyone was right. Luckily, I have connections at the local spirit store and was able to get my hands on a bottle. The price stabbed me with some sticker shock (nearly 23 dollars) but I knew something this rare and undeniably special couldn’t be missed.

I bought it for Thanksgiving and was more than prepared to share. It was a family gathering and I knew that at least five of us were beer drinkers and might just like it. The more I looked at both its percentage and the fact that it was a Barleywine, however, the less convinced I became that I’d have five followers. Really there were only two of us to really appreciate it.

Regardless, after the feast I served up five glasses and passed them out. I was most than impressed with its amalgam of different and varying flavors: caramel, oak, raisin, molasses, citrus rind, and, without a doubt, the liquid-fire burn of alcohol… but in a lovely way, indeed.

I was also correct in my previous assessment: my brother and I loved it, the others? Not so much. I am a Barleywine fan anyway, so I had some idea of what I was getting into. So, as it turned out, was my brother. I got drunk, as we kind of did ourselves since we had to finish the other’s glasses. No way I was letting this stuff go to waste.

All kidding aside, it is a strong warmer and lets you know it right away, but it is delicious. It might be too late to find it, but if you have connections, too… it’s worth all the effort. 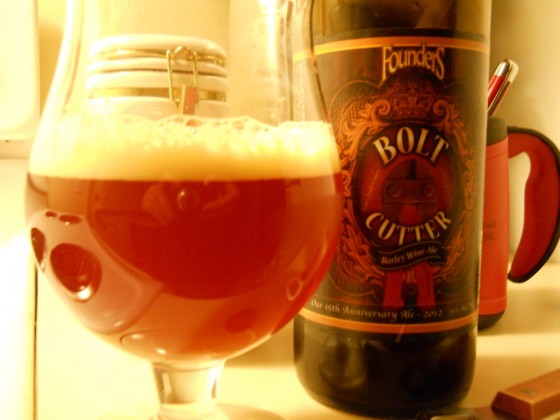