Four Forgotten Newspaper Articles That Will Blow Your Mind

The title of this post is self-explanatory, so there’s no need to dilly-dally with an introduction here. Although for the youngins’ in our audience, the fact that people once read newspapers might be enough to blow your mind. For the rest of you, it’ll take a bit more effort… 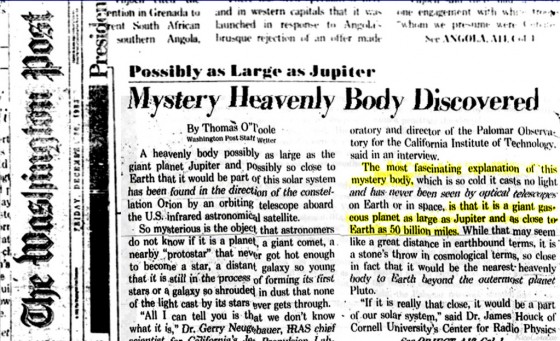 A tenth planet the size of Jupiter was seen, reported in a newspaper, and then we don’t hear anything about it for the next 29 years.

A heavenly body possibly as large as the giant planet Jupiter and possibly so close to Earth that it would be part of this solar system has been found in the direction of the constellation Orion by an orbiting telescope aboard the U.S. infrared astronomical satellite.

Evidence from the article suggests that it is a large, heavenly body. That or it’s planet X.

Possible explanations include government cover up, embarrassment over a satellite malfunction, or just a bunch of guys at NASA suffering from a whacked-out hallucination. 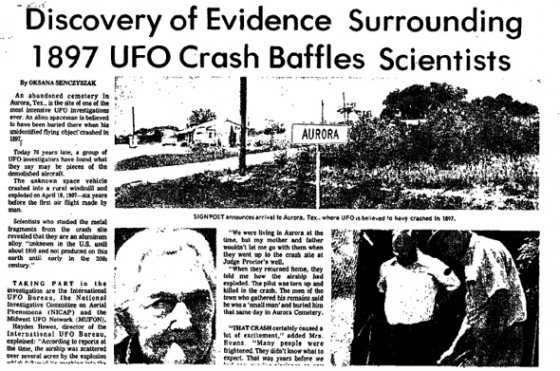 This predates Roswell by 50 years.

About 6 o’clock this morning the early risers of Aurora were astonished at the sudden appearance of the airship which has been sailing around the country. It was traveling due north and much nearer the earth than before. Evidently some of the machinery was out of order, for it was making a speed of only ten or twelve miles an hour, and gradually settling toward the earth. It sailed over the public square and when it reached the north part of town it collided with the tower of Judge Proctor’s windmill and went into pieces with a terrific explosion, scattering debris over several acres of ground, wrecking the windmill and water tank and destroying the judge’s flower garden. The pilot of the ship is supposed to have been the only one aboard and, while his remains were badly disfigured, enough of the original has been picked up to show that he was not an inhabitant of this world. Mr. T.J. Weems, the U.S. Army Signal Service officer at this place and an authority on astronomy gives it as his opinion that the pilot was a native of the planet Mars. Papers found on his person, evidently the records of his travels, are written in some unknown hieroglyphics and cannot be deciphered. This ship was too badly wrecked to form any conclusion as to its construction or motive power.

It was built of an unknown metal, resembling somewhat a mixture of aluminum and silver, and it must have weighed several tons. The town is today full of people who are viewing the wreckage and gathering specimens of strange metal from the debris. The pilot’s funeral will take place tomorrow.

It’s either a crashed alien, a whisky induced hallucination, or a tall tale from some folks that didn’t have Netflix or cable television.

Life was harder back then, folks didn’t have time for silly crap like the mysteries of the universe and whatnot, so they didn’t make too big a deal about it. Also, unlike Roswell,all witnesses are dead.

I’m going to run the red flag up on this one and give it only a 10 percent chance.

Life From Space (Bacteria in Meteorites) 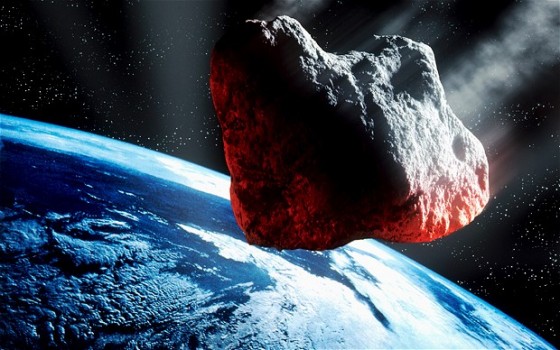 Not fossilized, but LIVING bacteria! NASA spends millions of dollars trying to find alien life on Mars, and it turns out it was here on Earth all along.

Dr. Charles B Lipman of the University of California claims he has found living bacteria in material that has fallen to Earth as meteorites.

It’s either alien life, a scientist needing a grant, or contamination from Earth. It may have been the inspiration for the ’50s era film, The Blob.

There are probably some meteorites sitting in storage at Berkley, completely forgotten about. It’s entirely possible Lipman discovered he was wrong and just forgot to tell anyone.

Ark of the Covenant Taken

Just what it says — witnesses saw the Ark being taken away.

The inhabitants have been Aroused to the point of rioting by the operations of a party of English Archeologists who are accused of having excavated beneath the inviolable Mosque of Omar and removed relics reputed to include the Ark of the Covenant.

It’s either true or not true, depending on who you believe.

You’re back? Good. The article goes on the tell the confession of some guards, who say they were bribed to look the other way while the Ark was spirited away.

This one is a bit concerning. A relic of immense power was found over 100 years ago? What the heck did they do with it?

Suppose they did find it and they put it on display in a museum somewhere. You decide to load the kids up in the Model T and drive to the display to gaze upon God’s covenant with man. You walk into the room where it is and the last thing you remember is seeing the faces of your family melt away as they gaze upon God’s glory. This doesn’t make for a nice family weekend.

Or they could have sold it to the highest bidder. The original handwriting of the almighty would fetch some big bucks on eBay. The thing is, anyone who is not holy enough would be struck dead just by looking at it. So you would have to cover it with a blanket or something and tell the buyer he just had to take your word for it. Millionaires don’t get rich by being gullible, so selling the thing is probably out. So What happened to it?

One possibility is that it’s in a crate in a government warehouse gathering dust, just like the ending (SPOILER!) to Raiders.

It’s either a conspiracy, or a big fat lie from the witness.

If a group of archeologists did recover the Ark and hijacked it to England, can you imagine the shit storm that would follow if everyone knew about it? WWII would have looked like a bitch slap fight.

C) Chance of being true?

While it does sound like something a bunch of snooty self-proclaimed culturally superior archeologists would do, I’m going go with the lying security guard who was trying to get more money. 35%