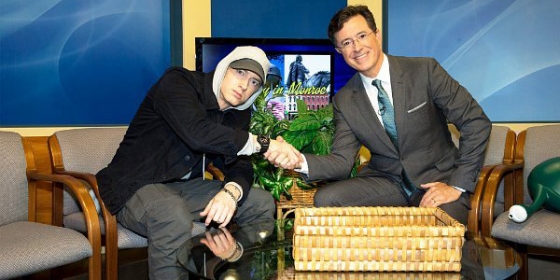 We tend to think of public-access television as a bizarre joke, with many people taking to the airwaves to express themselves or showcase their talents in a misguided attempt to entertain the masses. It has inspired parodies like Wayne’s World and Stephen Colbert’s Eminem interview, but the world of public-access television goes much deeper than Wayne and Garth in the basement. 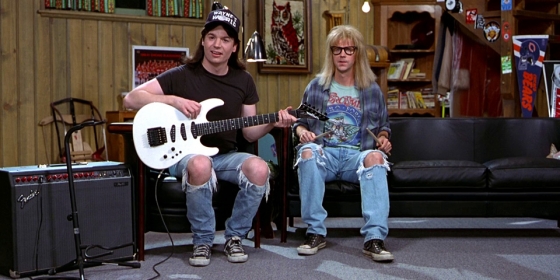 There are entire YouTube channels dedicated to the strangest shows and segments that have survived into the digital age, but if you can wade through all the variety shows and bad comedy you’ll find people who deserve your respect. Sure, most of them were laughed out of the building in their time, but in hindsight there’s something about their character or performances that has earned our admiration. Or something. 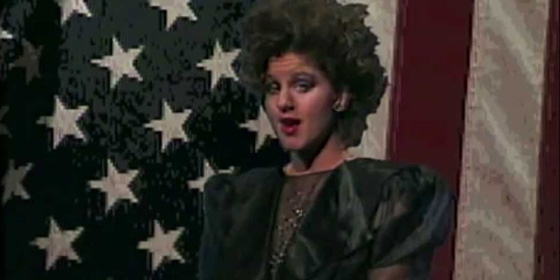 Lots of people turned to public-access hoping to become superstars, but few burned with the intensity of Sondra Prill, the crown-jewel of Florida. On My Show she would perform covers of popular songs, sometimes going so far as to film full-on music videos. Unfortunately, Sondra misunderstood what it takes to be a singer, substituting vocal training for fur coats.

While enjoying her aggressive take on “Pump Up the Jam,” you need to ignore a few things to get to the heart of Sondra. You need to ignore that she’s absurdly overdressed for the beach in some shots. You must also ignore that all the sudden zooms give this “party” the feel of found footage. And most difficult of all, look past the fact that the guy in pink shorts looks suspiciously like A. C. Slater. Just listen to her voice. Both of her modes, sultry and scary, are on full display here.

It’s funny for the duration of a song, sure, but keep in mind that she was at this for five years. It took half a decade and a disastrous live show before Sondra had a moment of clarity and pulled the plug. Sadly Sondra herself hasn’t resurfaced with the advent of YouTube. Her whereabouts are unknown with speculation ranging from “she changed her name” to “she’s been dead for x years.”

Sadder still is that, after a few listens, her voice actually works. You’d be hard pressed to say she’s a technically good singer, but she uses what she has to great effect, and if you can look past the craziness of her videos you might find she’s really enjoyable in a strange way. 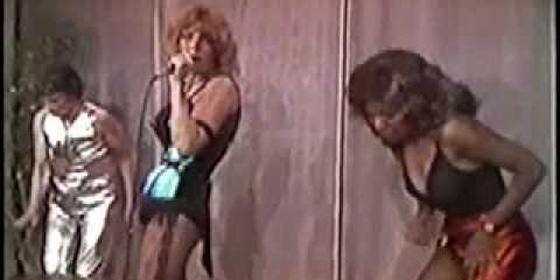 How do you react to a negative experience? In the era of the screen you might make a passive-aggressive Facebook status or send a scathing email. But in 1983 the only acceptable answer to this question was “get some television cameras and back-up dancers.”

It would seem that Penny Pearce had had enough of her shrink, so much so that she wrote a song blasting the entire field of psychotherapy and performed it on Santa Monica public-access. Though it lacks the slick production and barrage of asses a Sondra Prill video provides, it makes up for it with genuine emotion. Penny is pissed, and her rage reaches such a height that two futuristic space hairdressers have to hold her back, lest her madness reach Randy Savage levels and damn us all.

There’s no grand attempt at artistry here. All available evidence suggests that Penny wasn’t looking to become a star like Sondra. She seems to have done it for the simple joy of doing it, which is pretty much awesome when you think about it: she got upset, got creative, and presented it to an audience with zero expectations. Over twenty years later the clip was posted to YouTube, gaining a new level of popularity that inspired several cover versions. And if online accounts can be trusted, Penny is totally cool with this. She’s neither embarrassed or ashamed by the performance and leads a normal life. 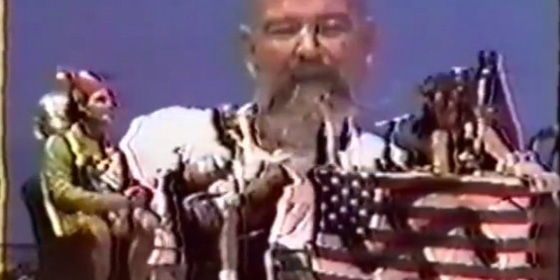 (OPEN on an American flag with a swastika crudely spray painted on it. As the title is super-imposed on this image footage of Nazis is displayed in the background while music by a sub-par Death in June cover band plays. Both flag and title disappear, leaving us with an uncomfortably long shot of Adolf Hitler. CUT TO a close-up of Satan at his desk with a bottle of liquor. As he barks obscenities he also greets us with a Nazi salute, because subtlety.)

This is only a rough estimation of how the script for The Great Satan At Large opens, and these brief moments are the only coherency the forty-five minute show offers us. We’re never told why Satan is hosting a call in show in Tucson, Arizona at six in the evening, nor can we always make out what he’s shouting. It’s equal parts surreal and uncomfortable, even before the live callers weigh in on how they’re masturbating to the show. All the sex and violence and racism and nudity was likely intended as performance art, pushing the limits of decency while saying something deeply profound about our society. Instead it resulted in the host having to flee Arizona to avoid obscenity charges and prison time. No, really. 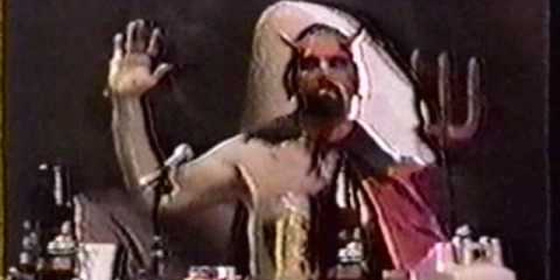 It exists in its entirety on YouTube (we’re not going to link to it here—if the whole “obscenity charges and prison time” thing didn’t make it clear, this is one of the most NSFW things on YouTube ), but no matter how many times you watch it there’s no satisfying way to describe it.

The beauty of The Great Satan At Large isn’t in any of the increasingly bizarre shit that happens on screen: it’s not when the jester masturbates as Satan hands him five dollar bills; it’s not that God is dressed like your fun grandpa on vacation while the characters he sits between look like a crime-scene-victim-clown and a hard-up Nazi stage magician; it’s not when the Sexecutioner proposes to his (allegedly) underage sex slave. No, the wonder of all this madness is that it undermines its own insidiousness and actually proves the existence of God by surviving to present day.

It’s understandable that in the foggy yesteryear of 1991 someone tuned in to Satan screaming about sports on a half-empty sound stage and thought to cue up the VCR, but the fact that said recording survived the odds long enough to be uploaded to YouTube is evidence enough that a divine being watches over us all, and he’s pretty messed up. 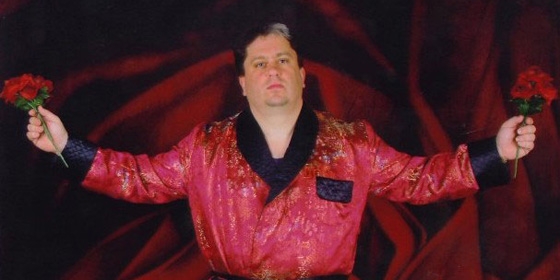 The beautiful thing about public-access is that, bar someone seeking your immediate arrest, no once can actually make you stop. That’s how Gorgeous George has remained on the air for more than twenty years despite the public at large trying to stop him for most of his run.

Imagine that your high-school improv club got into a head-on collision with Howard Stern. Now imagine that the resulting wreckage wore shiny robes and woooo’d like Ric Flair. Finally, picture this strange entity making penis jokes while onlookers scream and flee for their lives. If you could distill the Gorgeous George Show into its purest form, that would be it.

For over twenty years George’s show has provided the fine citizens of Virginia with singing, dancing, sketch comedy and interviews, netting him exactly zero fans. In the early 2000s the internet caught wind of him and gave the audience a reason to watch by bombarding his phone lines with prank calls. Rather than let it roll off his back, George fights callers with the softest, clumsiest barbs you’ll ever hear. It’s like a really sad car crash that people love to hate.

But that’s not the reason to like George (which is admittedly pretty hard if you’ve watched more than one episode of his show). No, George deserves your admiration because he refuses to give up. He wants to be an entertainer, and despite his audience telling him non-stop that he’s doing a terrible job at that, he soldiers on.

Think of it this way: other people on this list eventually saw the writing on the wall. Sondra Prill fell off the face of the Earth when she realized she was never going to be America’s sweetheart. The Great Satan only stood by his work up until the police came knocking on his door. Many episodes of Gorgeous George break down into an embarrassing back-and-forth between host and callers, and these attempts to get under his skin have spilled over into his personal life with people trying to screw with his private business, which is presumably his actual source of income. Despite these blatant warning signs that people hate him, George keeps coming back, confident that he’s God’s gift to television. Either he has balls of steel or a complete lack of self-awareness. Either way, that’s a crazy amount of dedication.