Humor > Lists > Four Terrible Things to Do When You Die

Four Terrible Things to Do When You Die

Death: the end of the line. The last train to Clarksville. Giving it up to the Spirit in the Sky. Being welcomed to the jungle. Until science perfects some sort of immortality serum, has the serum stolen by highly intelligent monkeys and battles the newly immortal monkeys in Great Science War of 3535, we’re all going to have to stare the Grim Reaper in his non-eyes as he drags us kicking, screaming and perhaps even peeing a little bit, into the great beyond. Some of us hope to go quietly and with dignity. Others instead take a more perplexing, horrifying approach. Approaches like…

The people of Tibet have been practicing sky burials (or jhator for those of you without a word of the day calendar) for centuries. In Buddhism it’s commonly believed that once a person dies any form of life has left the body. So, why not make use of it? And so they do: the first step is taking the deceased to a large flat rock on elevated terrain. The second and most important step is to then beat the holy hell out of it. The body is pulverized in a Tekken sort of way, if Tekken involved large rocks and sledge hammers. Once you’ve gone from Weekend at Bernie’s to Elmer’s Glue, the monks add a mixture of flour, butter and milk to make you especially delicious to the vultures. 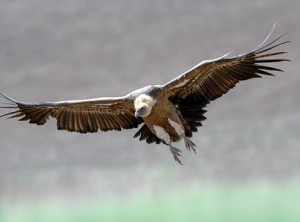 Cold and unloving, vultures consume the flesh of humans to gain their power and wisdom.

Wait, we didn’t mention the vultures? Oh. Well you see, jhator roughly translates to “giving alms to the birds.” The body isn’t needed for reincarnation to take place. Rather than stick you into the ground you’re fed to birds of prey. This allows you to keep contributing to life, show compassion (because nothing says compassion like murdering the deceased) and perhaps most important of all, to stop vultures from striking down the living a la The Birds. If you still find it frightening, try thinking of it as heroic: you must be consumed so others may live free of the terror of avian horror.
If you’re thinking that’s all a bit grim, you’re not alone. The People’s Republic of China banned the practice sometime in the sixties, only to allow it again in the eighties. It’s probably for the best, anyway. Even if you are a ruthless regime you shouldn’t piss off people who double-kill human beings for a living.

Diamonds are forever. Given the average teenager’s diet of Mountain Dew, Cheetos and Cheeto dust, people probably aren’t. Thankfully, we as a species have learned to abuse science to the point where we can take human remains and transform them into fake stones. Suck on that, nature! 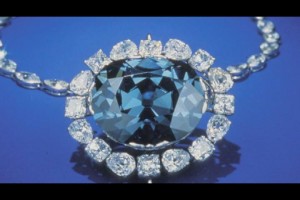 This stone, once used to defeat a powerful wizard, now traps the souls of the damned.

Though the technology is relatively new there are several companies all over the world willing to take your corpses and turn them into precious jewels. Even Russia, the world’s Bond villain, can take you from “tragic Ski Doo accident” to “pawned off engagement ring” if the price is right. If this is such a large market, why aren’t we all walking around encrusted with the sparkling remnants of our loved ones? If corpse-alchemy is really a billion dollar industry then why do we even choose to bury people anymore? Shouldn’t we be turning every one-time skydiver and former NASCAR champion into diamonds? We’re not economists or anything, but this is a recession, internet. It’s time to think outside of the coffin.
The folks at LifeGem originated the process and have been playing God’s jeweler since 2001, turning cremated remains or even hair into synthetic diamonds. This form of necromancy totes itself as a memorial service and, when these black arts are at their peak potency, can turn one adult human being into over one-hundred diamonds. Ranging from three-thousand to twenty-thousand dollars a stone, you’re officially worth more dead than alive. However, given the new size and value of the deceased, you’re also more prone to theft and falling down the drain of public restroom sinks. Indeed, diamonds are forever, up until the point where you lose them.

“Why buy a casket for just one day?” This question has been pondered by think-tanks the world over for countless years. Indeed, the greatest bane of the living is that eventually decent society expects you to buy a construct that it will eventually bury you in. What kind of bullshit is that?
Apparently somebody somewhere decided enough was enough. The folks at Casket Furniture realized that if we’re going to spend most of our lives fearing the reaper, we may as well have some incredibly unpleasant furniture to match.

Casket Furniture provides you with everything on the label: caskets that are also furniture. There’s really no surprises when you explore their catalog: couches, tables, shelves and even beds for the truly morbid. If you’re going to spend your waking hours sitting on, eating off of, putting things on or sleeping in a massive death box then chances are you don’t care for companionship. That’s good, because the sight of these things will drive everyone out of your home in record time.
If you’re wondering just how far down this rabbit hole we’re going to fall, brace yourself for impact. 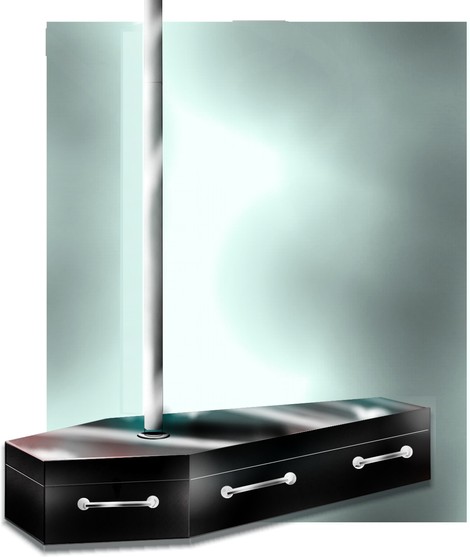 Okay, so technically you’re supposed to bury the casket furniture once you’re dead and inside. But oh man, what if someone forgot? Can you just imagine?

Some people fear the return of Christ. Others, the zombie apocalypse. Fortunately this will protect you from both. 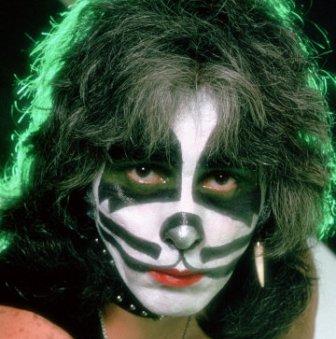 "Meow! I'll be your guide across the river Styx!"

What can be said about the KISS Kasket? For one, casket is spelled wrong. But look at it: it’s a box, designed to hold and maintain the deceased, brandished with the imagery of KISS. When does your love for a band cross the line from tasteful to debilitating? We think it’s when nine out of ten funeral homes deny you service because of your extreme-yet-incredibly tacky choice in caskets. On one hand, it’s a bit presumptuous of Gene Simmons to assume his fans would want to spend the afterlife locked in a cruel box of his own design. On the other hand, he’s had the market on inexplicable music merchandise cornered for years, so a casket really isn’t all that far-fetched when you really stop and think about it. Compared to KISS Kondoms (sic), a casket is a relatively normal thing for a man in cat make-up to put his face on.
Upon realizing how monumentally stupid a rock ‘n roll casket is, someone made the brilliant marketing move of adding the selling point that a KISS Kasket can become, with the addition of a fuck-ton of ice and inexpensive beer, a KISS cooler (kooler?). Based on this, we can make three observations about people who are willing to use a casket as a cooler:
Observation #1: The person in question has an alcohol problem of which the likes the world has never known and may never know again. If it takes a casket to properly chill all of your adult beverages you’ve stumbled down the twelve steps and slammed head first into irreversible liver damage.
Observation #2: The person in question throws the worst tailgate parties.
Observation #3: The person in question is in prison.